Two Sides to Two and a Half Cents in Fairfax County

Supervisors to vote on proposed budget, possible real estate tax increase on May 1. 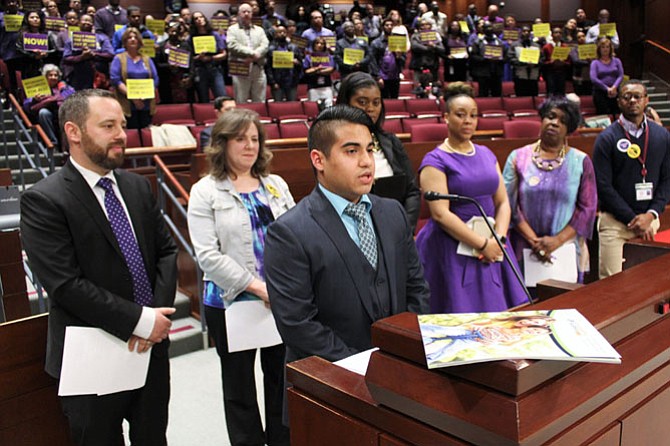 Enrique Carrero, Fairfax County employee standing with many union members, says that as a millennial, he cares very much about retirement benefits.

Kofi Annan, president of the Fairfax County NAACP, addresses the Board of Supervisors about more funding for PreK for needy families, and questions about Fairfax County Police Use of Force. The board will vote on the budget on May 1.

“We are Fairfax County and the people who live here want an inclusive and welcoming community for all.” — Kimberly Adams, Clifton

Their Own Words, A Glimpse

“Fairfax County’s demographics are rapidly changing as you know. It is becoming increasingly diverse, and with these changes often come a unique set of challenges.

“The county’s revenue outlook is the most promising it’s been in years. However the rate of revenue increase is not reflected in the rate of investment in the poor and working class communities. The low income Fairfax residents, a disproportionate amount of whom are minorities, will not automatically benefit from the improved economy. Thousands will remain reliant on low-wage service sector jobs and many will not receive pay increases. Many of them will not be able to provide for their kids with pre-K education or have access to affordable housing. Therefore, we request that the county direct greater attention and resources to serving the needs of the less fortunate among us.”

Annan expressed concern that the county is underfunding Pre-K education for needy families.

“This opportunity gap eventually turns into an achievement gap, and that widens over time.

“Fairfax County NAACP calls on the county to commit the resources to enroll at least 300 additional kids into Pre-K in 2019 budget and devise a long-term plan to fund at least 2,000 over the next five years.

“Expand access to affordable housing. Many low income residents will not be able to afford to live in Fairfax County. Many of these families will spend up to half or more of their annual budget” on housing.

“For the past few years, 40 percent of police use of force has been directed toward African Americans, who only make up about 10 percent of the county.

“And for the past few years, we have been asking the county to fund an outside organization to conduct a study to determine the causes of this disparity, so we can begin the process of reversing that trend.”

“We support the new property tax rate because we believe it gives you more flexibility in meeting unexpected challenges and we applaud your increased contributions to the reserve funds to satisfy the bond rating agencies. As taxpayers we appreciate your efforts to the county’s triple A rating.”

“MCA is concerned about the context of the increases in spending and the apparent lack of cost savings. MCA feels that each budget should include new efficiency, in operations particularly in budgets of $4.3 billion. ... “

“We really support teacher raises” while also expressing concern about allotting millions for raises for administrators in the school system.

“We applaud your commitment to making Fairfax a livable community for people of all ages.

“Currently in Fairfax County, about one in seven residents are older than 65. By 2020, the proportion will nearly be one in five.

“I am proud to be the first one in my family to graduate from college, and I feel it’s important to give back to the community through my job as a public employee. I help families in need get heating in the winter and air conditioning in the summer. I’ve heard some people say millennial workers don’t care about retirement. So, let me clear that up. As a 23-year-old millennial, I care deeply about my future and believe that we all deserve to live comfortably when we’re too old to work.”

“I figured somebody in the room should try to speak for the average taxpayer,” said Parmelee, a perennial opponent of taxes, when he gave his opinion of the proposed budget on the first of three days of public comment.

More than 150 speakers testified, 158 signed up to speak, during the three days the Board of Supervisors allotted to hear from the public on the FY 2019 budget and proposed tax rate. The public comments lasted more than 11 hours and 20 minutes.

“When the voters in Fairfax County have had an opportunity to vote on tax increases, you saw what happened last time,” said Parmelee. “The voters of Fairfax County, on the very same day that they overwhelmingly voted for Hillary Clinton, they also overwhelming voted against the tax hike.”

If the Board of Supervisors were to adopt the full two and a half cent tax rate increase, it would amount to an additional $268 on the average homeowner’s annual tax bill.

Only four speakers, and approximately 21 minutes, divided Parmelee from speaker No. 12, Kimberly Adams, of Clifton.

“Aa a mother, taxpayer and employee here in Fairfax County, my life and livelihood are impacted by every budget that this country adopts,” said Adams.

“We have to remember that we are preparing the future for more than 185,000 students each year. I would encourage the school system to go under a similar lines of business review that the county has gone through,” said Adams, who suggested that savings from collaboration between schools and the county could be identified.

“If at the end of that exercise, savings are not identified, then we must move forward in a responsible manner that may mean raising taxes once more or looking for possible alternatives to property taxes that we have found to be so elusive here in the county,” said Adams.

THE PROPOSED $4.29-BILLION budget would transfer 54 percent of the total to the school system to fully fund FCPS’s budget request. It would also fund pay increases for teachers and county employees.

Adams spoke for many others when she addressed quality of life.

“Like so many here, I am happy to have amazing schools, fire and rescue professionals, human services, parks and libraries within my reach. It is why my family lives here,” she said, in the three minutes given to each individual speaker.

“All residents deserve an equitable opportunity to succeed if they work hard, but families that cannot afford homes in this area are a growing group. Many families are working hard but there are not enough good-paying jobs, not enough affordable care options, and certainly not enough affordable homes in this area. … I appreciate it when you spend my tax dollars to support many who live in need alongside those of us who are doing well. We are Fairfax County and the people who live here want an inclusive and welcoming community for all.”

“For nearly 20 years, this board has been raising real estate taxes two or three times faster than household income,” said Arthur Purves, of Vienna.

“This goes on year after year,” said Charles McAndrew, of Oak Hill.

“The key, of course, is attracting and retaining high-quality personnel to both [schools and county]. This budget begins to recover our competitiveness in relation to compensation offered by other governmental jurisdictions. I also support the $25 million annual increase in FCPS bonding authority to expedite its school renovation and support new construction that will alleviate severe overcrowding in some of the county’s fast developing areas,” said Niedzielski-Eichner.

“As one who was on the front lines advocating for passage of the Meals Tax, I find this reality ironic in light of the significant voices arguing against the meals tax due to its regressivity. Since each one percent of the property tax rate is projected to generate approximately $25 million in revenue, the proposed 2.5 cent increase in the real estate tax rate will generate about $62.5 million. The meals tax was projected to generate a $100 million per annum, with almost a third of this revenue, $28 million, to be paid by tourists and visitors to Fairfax.”

Kofi Annan, president of the Fairfax County NAACP expressed concern that the county is underfunding services to low income families, including housing and Pre-K education for needy families.

“This opportunity gap [of not having access to PreK education] eventually turns into an achievement gap, and that widens over time.

“Fairfax County NAACP calls on the county to commit the resources to enroll at least 300 additional kids into Pre-K in 2019 budget and devise a long-term plan to fund at least 2,000 over the next five years.”

Annan asked the supervisors to fund an outside study of racial disparities in police use of force.

“For the past few years, 40 percent of police use of force has been directed toward African Americans, who only make up about 10 percent of the county,” Annan said.

“And for the past few years, we have been asking the county to fund an outside organization to conduct a study to determine the causes of this disparity, so we can begin the process of reversing that trend.”