Bulova: ‘This Will Be a Challenging Budget’
Votes

Bulova: ‘This Will Be a Challenging Budget’ 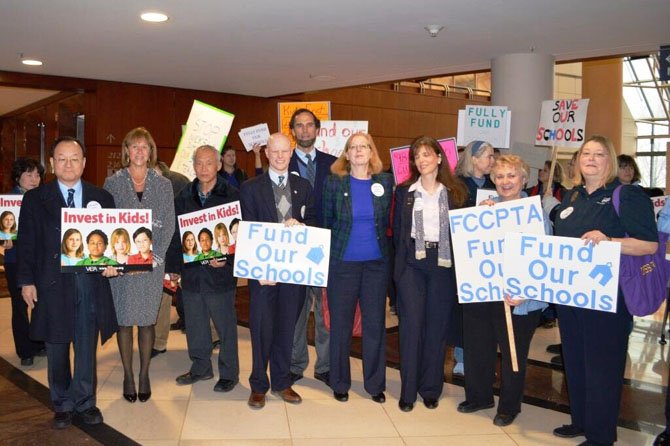 While Long’s budget does not include an increase in the real estate tax rate from FY 2014, steady gains in the county’s residential housing market mean the average homeowner will see a $330 increase in their tax bill, or a 6.5 percent increase over last year’s bill.

"The one area that is experiencing an upward tick is the assessed value of residential property in the county," said Board of Supervisors Chairman Sharon Bulova (D-At- Large), which will lead to the increase in homeowner’s property taxes even if the tax rate remains steady, as proposed by Long.

Supervisor Pat Herrity (R-Springfield) said "there’s a lot of work to be done" before the final budget is approved in April, and the county needs to "eliminate barriers to the growth of our commercial tax base."

"While spending increased by 3 percent, the cost to our taxpayers is increasing over 6.5 percent due primarily to the reduction in our commercial tax base," Herrity said. "I am most concerned that this increase will hurt those in townhomes, condos and apartments the hardest — the citizens that can least afford it."

"This will be a very challenging budget," Bulova said, citing disappointing projected revenues from business taxes.

Among those disappointed with the proposed budget is Fairfax County Public Schools Superintendent Karen Garza, who last month requested supervisors send $2.5 billion to the schools, an increase of 5.7 percent in annual taxpayer funding and $98 million more than the schools requested last year.

SUPERVISORS have said they were willing to increase their transfer by only 2 percent, which accounts for 52.1 percent of the proposed county budget expenditures.

Garza’s request is about $64 million more than Long’s budget recommendation of $1.93 billion, a 2.07 percent increase (or $39 million) over the current fiscal year.

"Our schools are bursting at the seams, talented teachers are leaving, and already large class sizes could get even bigger. The supervisors must make our schools the priority," the FCCPTA said in an online petition addressed to the Board of Supervisors.

"It’s absolutely stunning that supervisors put forth a budget that shortchanges students," said Kevin Hickerson, an FCPS teacher and parent-advocate who supported the rally. "Two percent is not enough."

To close that gap and fund other priorities, Bulova said she will consider advertising an increase in property tax rates, which would add about $150 to the average homeowner’s tax bill, on top of the $330 jump resulting from higher assessed values this year.

"Through the budget process, the board may adopt a rate lower than the advertised rate, but cannot adopt a higher rate," Bulova said.

According to the County Executive’s proposed budget, one penny of the tax rate is equal to roughly $21.9 million in the general fund and $50 for the average Fairfax County residential tax bill.

"As the county continues to face fiscal challenges, we must persist in our cautious and deliberative approach to budgeting, only funding items that are sustainable," Long said Tuesday, adding that almost all of the budget increase in his proposal will be earmarked for capital investment and employee compensation.

"These are two critical elements of our continued success," Long said.

"We are disappointed that the county executive's proposed budget fails to meet the needs of our community, and we call on the Board of Supervisors to do more to invest in our future success," SEIU Virginia 512 Secretary-Treasurer Karen Conchar said.

Wilhelm said Fairfax County employees have fallen behind peers in neighboring jurisdictions when it comes to pay, and Long’s budget proposal fails to help employees catch up.

"As a result, the best librarians, social workers, engineers and more will continue to leave Fairfax County to serve in other jurisdictions, hurting the services residents depend on," Wilhelm said.

OTHER HIGHLIGHTS of Long’s budget proposal include:

Public hearings on the proposed FY 2015 Budget are held in the Government Center Board Auditorium:

Residents can also provide feedback and comments on the proposed budget through mid-April at dmbinfo@fairfaxcounty.gov .