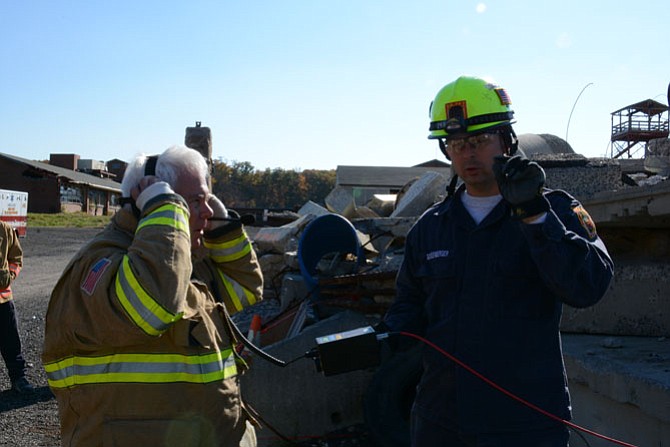 Rob Schoenberger is pretty good with a 15-foot extendable camera. Its built-in microphone and powerful lights come in handy, paired with a Delsar seismic sensor device, when trying to locate people trapped under the rubble of a collapsed building.

Technical Search Specialist and Medical Specialist Schoenberger is a member of Virginia Task Force 1, the humanitarian disaster response team within the Fairfax County Fire & Rescue Department. He’s based out of Fire Station 21 in Fair Oaks.

As a partner of the Office of US Foreign Disaster Assistance (USAID-OFDA) and the Federal Emergency Management Agency (FEMA) the Task Force responds to local, domestic and international catastrophes.

They’ve seen action for Hurricane Sandy around the east coast, in Haiti for the 2010 earthquake and dozens of other cities and countries in the aftermath of tornadoes, floods, quakes and building collapses.

It’s called up by one of the federal agencies, which funds the Task Force, not the county. But their experience makes it a win-win for everyone.

“The important thing I think everyone in Fairfax County needs to understand is that these international and national resources are first used locally and respond in any local emergency, which is a huge, huge benefit for the residents of Fairfax County, as well as the region,” said

“Everyone wants to go out,” he said, “so the more you can do, the more valuable you are.”

Schoenberger and other members from the Fire Department hosted the media Oct. 30 for a hands-on look at some of the disaster relief services the Task Force provides.

The Fairfax County Urban Search and Rescue training site, tucked back among dilapidated, burnt-orange brick buildings of the former prison system in Lorton, also facilitates training for the majority of the government agencies and military branches.

Captain I William S Moreland of the Fire Station 13 in Dunn Loring said most of the time while responders are in the field doing their jobs and the media and civilians are curious what’s going on, “You don’t get to actually touch anything.”

It was an opportunity for reporters to trade notebooks and cameras for electric wall-breakers and door-cutters. To look the part, everyone was ushered into dense black boots, flame-retardant overalls and jackets, work gloves and helmets.

“Medicine changes literally daily,” said Physicians Assistant Al Pacifico, with the Fairfax County Fire & Rescue Occupational Health Center in Fairfax. “We constantly have to be on top of our game.”

Next door was a mobile emergency room tent, powered by generators and capable of supporting surgeries and other health services for up to two weeks of deployment. The Task force maintains roughly 220 firefighters and paramedics, but only about 82 deploy at a time.

Then the nine-year-old German Shepherd “Cazo” demonstrated his ability to search for people trapped beneath a pile of rubble. In addition to dogs, technicians like Schoenberger use cameras and Delsar to place GPS markers where they think people are located. Next they bring in concrete breakers, giant automatic hammer-chisel hybrids that are either electric (Bosch or Hilti) or hydraulic (Stanley). In more capable hands, the tools can create a hole big enough to remove a person in a matter of minutes.

Another extraction technique practiced at Lorton is the high-line rescue: getting a victim down from damaged building when the elevator and stairs aren’t an option. Media members strapped on a complex harness and were lowered diagonally from 50 feet in the air, down diagonally 100 feet to ground level.

WHEN HAZARDOUS materials are involved, the Task Force has a unit for that too. They handle gas leaks, unknown chemicals and spills. “When people need help, they call 9-1-1,” said Jim Franklin, a technician and driver of the Hazmat engine out of Fire Station 440 in Fairfax Corner. “When 9-1-1 needs help, they call us.”

The real heavy lifting took place with two wrecked cars, simulating potential spinal cord injuries from traffic accidents. The doors and roofs had to come off.

Through a laborious use of a 65-pound Holmatro Extrication Tools door expander and cutter, the media team made a convertible out of a minivan in about half an hour. The professionals require less than half that.

The pros also train rigorously: once a month at the Lorton facility and daily at their home stations.

“The training never stops, and that’s the way the calls work, said Captain I Randal L Bittinger. “We’re prepared for everything and we’re doing it, everything.”

As physically taxing as the roof removal was, several non-firefighter participants commented how different and dramatically more difficult it must be to do the same work while trying to keep victims calm.

“When you’re in that position, your job is to focus,” said Station 39 Commander, Captain II Kit Hessel. “You decompress a little afterwards, relax, take it in. It’s one of those things you have to get through.”

During the morning session, multiple calls came in over the radio with accidents requiring extractions. It was an active reminder why the teams devote so much effort to preparation.

“These guys train the hardest,” said Hessel. “You never want to make a bad call, but they’re the people you want on a bad call.”