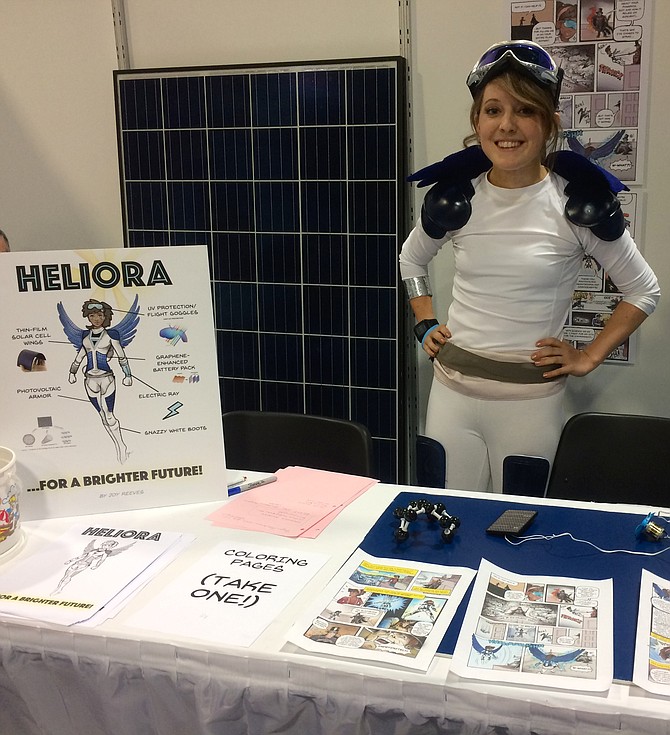 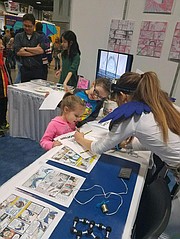 Joy Reeves talks with children at the 2018 USA Science and Engineering Festival in Washington, D.C.

“With science on my side, I fight for my city, the environment and for a brighter future,” says Superhero Heliora, the creation of Joy Reeves, a senior at St. Andrews Episcopal High School.

Reeves’ Superhero comic, about a high-school science whiz who engages her engineered suit’s solar batteries and graphene nanoparticles to defeat the evil Dr. Blackburn to save the environment of Brightfield City, won first place in the National Science Foundation’s Generation Nano completion.

She combined her love of drawing with her interest in solar technology and alternative energy to write and draw her project. When it captured first place, Reeves said she literally “screamed out loud. I never thought I would win at all – let alone first place.”

Reeves commended her AP Studio Art teacher Laura Cook for helping her to find her style and voice as an artist. “She has taught me so much about art as well as a variety of artistic techniques. She was instrumental in encouraging me to enter the competition. I was thrilled that Ms. Cook was also honored by Generation Nano for her mentoring of young STEM artists.”

Because she won the NSF competition, she was invited to take part in the 2018 USA Science and Engineering Festival in Washington, D.C., where she displayed her new superhero at a booth. Dressed as Heliora, she captured the interest of the crowd as she showed them her project, took photos with the children and discussed her interest in environmental science.

“It was such a thrill discussing my exhibit with students, teachers and scientists. I really enjoyed connecting with the kids who were fascinated by the costume I designed — ski goggles, spray painted shoulder pads, and a swim shirt from Walmart — and the story I created. After this festival, I’m now inspired to include Visual Arts in my studies,” she said.

She is the daughter of Jill and David Reeves. Her twin brother is Gordon Reeves.

Reeves is involved in a wealth of activities at St. Andrews. In September, she was selected to serve as a student research fellow at the Center for Transformative Teaching and Learning. “In this program, I research effective learning strategies, design and implement high school programs for neuroplasticity and present findings via panel to Harvard University faculty/graduate students and to MIT researchers.”

She also participated in creating an educational neuroscience app. She is president of the Environmental Club, founded the Outdoor Club and participated last summer in Field Ecology Studies through Drexel University.

In the future, Reeves will most-likely be making her mark in environmental science, creating inventions – or providing teachable moments – and cartoons. When her comic-character says, “Thank you photovoltaic nanotechnology advancements,” and the villain replies, “What does that even mean?” you get a peek into Reeves’ sense of humor and goal to make science more understandable for all.