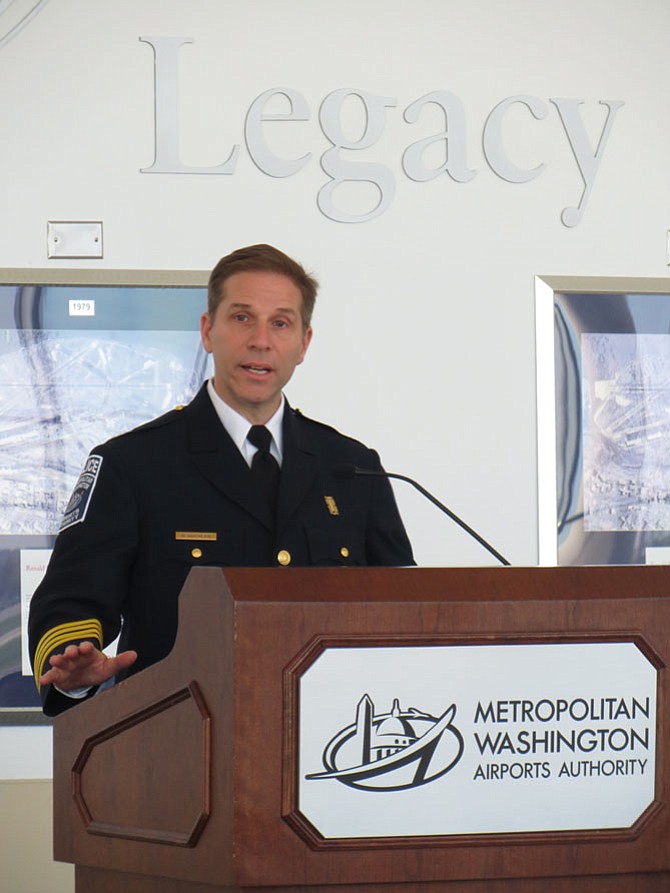 “The last few weeks have been a whirlwind of introductions,” said Huchler. “As a cop, I thought I knew all the acronyms. Then I came to MWAA. I’ve never been so thankful we only have 26 letters.”

Huchler, who had formerly been acting chief of the Alexandria Police Department before Chief Michael Brown was chosen for the job one year ago, said he grew up in a small town with television-fueled dreams of big city police work.

Huchler said he was drawn to the complexity of the job, with MWAA staff expected to do the work of a traditional police department while also running security for two of the largest targets in the country.

The management of MWAA said Huchler’s experience in the DC region played a large role in their selection.

“We’re excited that [Huchler] comes from local police,” said John Potter, president and CEO of MWAA. “We rely on mutual aid. Those are relationships you have built up. We don’t have to build [regional] bridges again.”

“The mission here is a tall task,” said Margaret McKeough, vice president and chief operating officer of MWAA. “Our mission is connecting the world; people and goods. Thank you for accepting that task.”

Huchler said one of his priorities as the new chief of police will be pushing his staff to also build positive relationships with regional law enforcement and governments.

“Our jurisdiction sits over three counties,” said Huchler. “[This job] requires good relations with local and federal partners. You have to be able to pick up the phone and call people by their first name. We’re making sure our staff are out in the community making those connections.”

“[Huchler] was going to be chief of police some place,” said Cook. “So whoever chose him was going to get a wise, young, excellent leader. I feel better coming through the airport now. I know what he demands, I know the excellence of his standards. It’s extremely important that he’s still part of the [Metropolitan Washington Council of Governments]. It’s important not to have lost that experience. I’m very happy for him and as a private citizen of this area.”