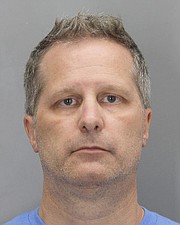 Fairfax County police have charged a former teacher at both Westfield and Chantilly high schools with attempting to solicit a minor online. He is Norman Achin, 50, of Woodbridge.

He was arrested last Monday, July 23, following an investigation by the Police Department’s Child Exploitation Unit. According to police, a detective hoping to catch predators of children was posing online as a teenager when a stranger contacted the officer through a social-media app.

Police say that person reportedly initiated a conversation and solicited sexual contact with the detective. They say he also allegedly sent the detective a sexually explicit image, presumably of himself.

Police spokesman Christopher Sharp said the alleged online conversations and solicitation occurred throughout July. However, he did not know whether the suspect believed he was reportedly interacting with a young male or a female.

Detectives later identified Achin, of Woodbridge, as the man who’d made the online contact. Police then arrested him and charged him with two felonies – attempted indecent liberties of a child under age 15 and use of a communication device to solicit a minor. He was held without bond at the Fairfax County Adult Detention Center and has a Sept. 5 court date.

During the 2017-2018 winter school year, Achin taught Latin at both Westfield and West Springfield high schools. Prior to that time, he was also a Latin teacher at Chantilly and McLean high schools. After his arrest, Achin was suspended from FCPS without pay.

Meanwhile, detectives are looking into the possibility there may be additional victims. They are asking for anyone with information or who experienced a similar incident with Achin to contact them at 703-246-7800. Tips may also be submitted anonymously through Crime Solvers by going to http://www.fairfaxcrimesolvers.org. Or people may text their information to “TIP187” plus a message to CRIMES (274637).