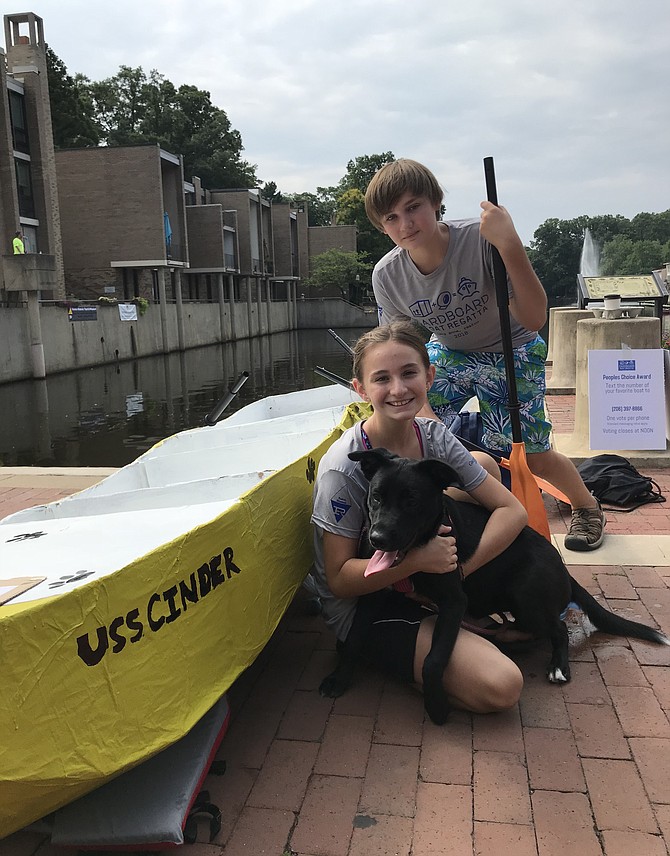 Pirates Lea Daniel, 11, from Great Falls and her brother, Quincey, 14, prepare to launch “USS Cinder” at the 2nd Annual Lake Anne Cardboard Boat Regatta held Saturday, Aug. 11. The team placed first in the Cadet Class with a time of 2:14. Photo by Mercia Hobson. 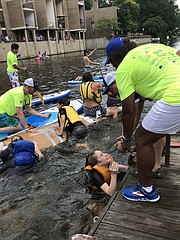 The handsomely crafted cardboard boat “Lake Anne Coffee & Wine Bar” rolled over dockside seconds after launching during the final heat of the 2nd Annual Lake Anne Cardboard Boat Regatta held Saturday, Aug. 11. The dunking did not deter some crew members from attempting to climb back aboard.

With a healthy dose of competition, pride and cooperation thrown in, thirty-two teams competed for first, second and third place awards in three age-based trophy categories, the People’s Choice Award and the not-so-coveted but highly amusing, Titanic Award given to the team with the most spectacular boat sinking.

Spectators assembled on the lakefront plaza well before noon. With the sun high in the sky and blazing, the heat was intense but it did not deter a reported crowd of 1000 individuals.

In an interview before the race, contenders Lea Daniel, 11, of Great Falls and her brother, Quincey, spoke about making the boat, “Cinder,” and how they designed it. "It took us about 40 hours, and it's an original design," said Lea. Pointing to her rescue dog, Cinder, Lea added: "Cinder loved coming outside to help us paint. He's a team player."

Lea’s brother, Quincey, said, "We added a pontoon to the side so that hopefully it keeps us stable." Mom Alina told how the children, who are members of the NoVa Labs, did not want to go to a weekly summer camp but instead asked to stay home where they researched how to build a boat and then constructed it together.