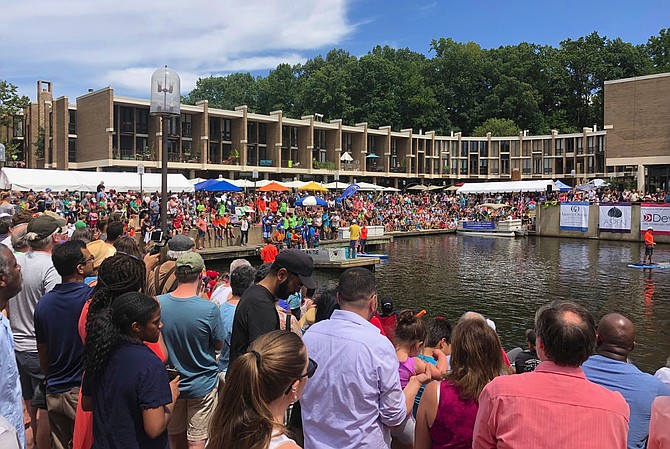 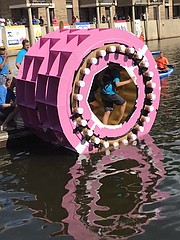 Cardboard boats of all sizes, shapes and designs participate in the 2019 Lake Anne Cardboard Boat Regatta.

The seaworthy Redemption, aka the Beatles Boat, with a ten-member crew, successfully sets course from the Lake Anne dock, circles the buoy and returns with a time 1:55, winning First Place in the Cadet Class at the 2019 Lake Anne Cardboard Boat Regatta. 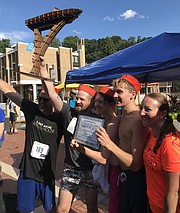 "Who would have thought cardboard and duct tape could be so much fun," said Kurt Rose, board member of the Reston Historic Trust & Museum. Rose and others helped organize and produce the 2019 Lake Anne Cardboard Boat Regatta, hosted by RHT and supported in part by Presenting Sponsor, Griffin Owens Insurance Group in the Town of Herndon.

An estimated 3,000 people packed Lake Anne Plaza and waterfront Saturday afternoon, Aug. 10 for the 2019 Cardboard Boat Regatta. Family members and friends cheered on the 60 teams racing in timed heats of twos, each valiantly vying for one of the three First Place cardboard trophies or the Titanic Award for the most dramatic sinking.

"This event is always hilarious," said Del. Ken Plum (D- 36) as he watched the competition unfold.

Teams ranged in size from one to ten crewmembers. Boat # 4, Dogwood Elementary Teachers, held only one person, Principal Mie Devers. Boat # 44, Redemption, aka the Beatles Boat, held ten people. The design, manner and time spent building the boats varied. Adrian Chadwell of Restoration Church said that five members of the crew made their boat, Restoration. Others such as Griffin Owens Insurance Group recycled their boat from previous years.

At the start of the community event, Emcee, Andy Sigle of Reston announced, "The boats look awesome...This is what Lake Anne Plaza was meant for, community coming together." As the regatta continued throughout the afternoon, volunteers like Rose and others stepped on board and kept everything running smoothly from set-up to traffic control to disposal crew. Kevin Witt and the Swim Team Dads from Lake Newport in Reston gladly took on the task of official race timers and dock crew.

Participants paid $50 to register each boat for the regatta. Next year, Reston Historic announced entry for 75 boats.