Wild and Wet Success in Reston 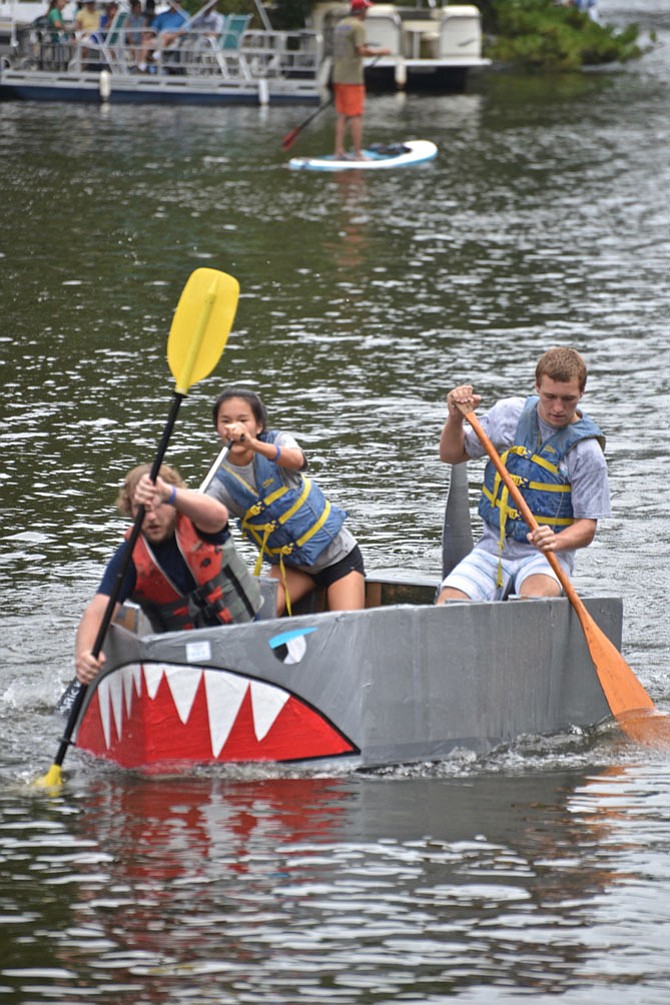 Team “What the Duct,” captained by Chad Levin, with mates Sky Lubreski and Olivia Rose of Reston, dig in deep as they head for the finish line. “What the Duct” won First Place in the Skipper Class for all-adult rowers. Photo by Andrea Worker.

The “Rowboat E. Simon,” named in tribute to Reston’s founder Robert E. Simon, was bravely crewed by two of the youngest sailors registered for the Regatta. Their team was the Laurel Learning Center, Cornerstone’s childcare facility at Lake Anne.

Melissa Romano and Tracy Converse never really made it much past the dock, but they still enjoyed the brief ride. Romano, co-owner of the Lake Anne Brew House, was the idea-woman behind the event. Converse is a brewmaster at the establishment, and said it was “a really fun thing to do for a good cause.”

The sailors from the BoatMobile don’t look too distressed at having to be rescued. The Team was proud to accept the “Titanic” Trophy for best sinking.

Time to relax and enjoy! Team Kalypso Sports Tavern on Lake Anne proudly display their Merchants Cup and award for the Most Creative Boat Design. From left, owners George and Vicky Hadjikyriakou, with patrons and service crew Alan Hood and Mike Henderson.

The idea started with Melissa Romano, co-owner of the Lake Anne Brew House. “We’re always thinking about ways we can get folks out here and showcase our wonderful community, and this just sounded like it would be a lot of fun.”

A bit of talking among the merchants and residents, the Lake Anne Association, and others and “Voila!” – the first annual Lake Anne Cardboard Boat Regatta took to the waters on Saturday, Aug. 12.

“We had a great committee and an army of dedicated volunteers to pull this off in a relatively short time. We only got started in the early Spring,” said Elizabeth Didiano, the Executive Director of the Reston Historic Trust & Museum, the non-profit that is the beneficiary of proceeds from the event.

Didiano wasn’t heaping false praise on the organizing group. The regatta ran like any professional race, with official timekeepers, judges and marshals.

And, of course, there were rescue personnel – a flotilla of paddle boarding life guards supplied and captained by Steve Gurney of Surf Reston Paddle Boarding at Lake Anne on standby, accompanying the boaters all along the course.

TWENTY TEAMS were signed up in three categories: Cadet Class for student rowing “sailors,” Navigator Class for mixed teams of students and adults, and the all-adult “Skipper Class.” (Spoiler Alert, The overall best time was not won by a boat from the Skipper Class)

There was also a “Titanic Trophy” to be earned by the boat that experienced the most spectacular sinking.

The Lake Anne Brew House went head-to-head with the Lake Anne Coffee House and Wine bar in the last heat. There was fierce competition between the two, with staff and patrons of each cheering on their favorites, but neither entrant made it across the finish line. Actually, Romano’s Brew House boat didn’t really make it much past the starting dock. The Coffee House boat, a semi-sleek design that was wrapped in a mile’s-worth of black duct tape, did eventually make it out to the Skipper Class buoy, but after about 20 minutes of bailing and trying to stay afloat, crew Meghan Thompson, the executive chef of the establishment, and mate Casey Brown were finally convinced to throw in the towel and allow themselves and the remains of their boat, to be escorted back to the dock.

The Reston Association itself was well-represented, with the RA executive director Cate Fulkerson, and senior director of Recreation Larry Butler giving it their best against a duo from Griffin Owens Insurance. The community’s governance group lost out on their heat, but it was a hard-fought battle to the end.

After several hours of competition, excitement, fun and wet wipe-outs, the winners were finally declared and went to the podium to accept their cardboard trophies and the congratulations of presenter Kurt Rose of the Trust’s Board of Directors and the cheers of the crowd.

Skipper Class: What the Duct

The winners of the “Titanic Trophy” were the crew of BoatMobile, although it was a tough decision for that one. The Lake Anne Coffee House could have won on the amount of time it took them to let their ship go down, and the Brew House Gang just made sinking look like a lot more fun than all that rowing.

The award for Most Creative Design and the Merchants Cup were both given to the team from Kalypso Sports Tavern on Lake Anne.

If the size of the crowd or the volume at which they cheered weren’t enough to convince that the inaugural Lake Anne Cardboard Regatta was a resounding success, then the fact that all 30 slots for next year’s race were taken by pre-registration during the event. See everyone next year on Aug. 11, 2018.