Not Just a Tree; A Precedent in Arlington
Votes

Not Just a Tree; A Precedent in Arlington

Failure to save the dawn redwood: Lack of power or lack of political will? 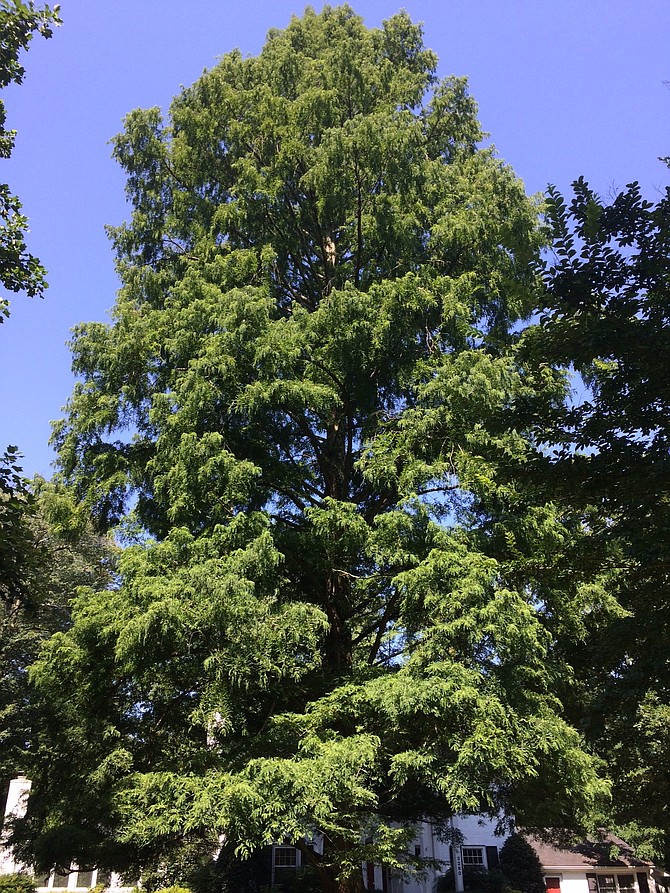 The Heritage dawn redwood on N. Ohio Street lost its battle to developers. The desire to protect the diminishing tree canopy in Arlington came to a head in the current struggle between Richmond Custom Developers and local conservationists over the fate of a 114-foot high Champion dawn redwood tree located at 3260 N. Ohio Street in a Resource Protected Area (RPA.)

On Aug. 21 the tree removal truck slowly and methodically began slicing off the limbs of the dawn redwood. Neighbors gathered to watch the demolition. “Such a shame.” said Angela Dickey, a neighbor and activist for preservation of the tree, “I felt like crying, and I think the tree was crying too. A horrible thing to happen to a living thing.” She said it felt like an amputation.

John Vihstadt, a member of the County Board and the board's representative to Parks and Recreation, said, “I share community anxieties about the loss of such a marvelous tree.”

Back in March the owner-developer originally indicated he planned to subdivide the lot and build two new homes, cutting down the dawn redwood, one of the largest of its species in Virginia.

Conflicting interests and differing interpretations of laws and regulations left the tree in the middle for several months with the dawn redwood caught in a Catch 22. Development plans filed with Arlington County become public documents once they are approved. But by the time they were approved it was too late to impact the county's and developer’s actions.

Defenders of the tree argue that the location of the tree in a Resource Protected Area gives it protection. An RPA includes streams, rivers and other water bodies and environmentally sensitive lands within 100 feet of these water resources.

A letter sent by the County Board on Aug. 15 indicated: "Although the tree is in a Resource Protected Area, under Virginia law and applicable county code provisions, the developer has considerable rights as a property owner to redevelop and subdivide the property and in this instance to remove the tree."

John Seymour, president of the Williamsburg Civic Association within which the tree is located, was able to obtain documents on the N. Ohio property through a Freedom of Information Act request (FOIA) Seymour shared the information with Bill Roos, an Arlington Tree Action Group (ATAG) member, who examined the plans.

VIhstadt said, “Our response to the FOIA request from a citizen looking to know more about the county’s process and ultimate decision to grant the developer’s permits was both hard to understand and incomplete.”

Seymour said, “Obviously the removal of the majestic dawn redwood was a disappointment to the neighbors and to the Williamsburg Civic Association as a whole …. I do take some comfort that the county’s response to the neighborhood included a reference to the planned Update of the Urban Forest Master Plan and Natural Resources Management Plan, both of which may include new administrative tools to promote tree preservation.”

In a series of email exchanges beginning in late June with Robert Sharpe, resident ombudsman and director of constituent services, County Manager’s Office, Roos explains that in his analysis the dawn redwood tree (number 973) is clearly in the RPA and is clearly marked for removal. It continues, “The Chesapeake Bay Ordinance states in Sec 61-10A ‘that land disturbance shall be limited to the area reasonably necessary to provide for the proposed use of development’.”

In addition, he suggests that with a minor adjustment the driveway could be rerouted to be farther away from the dawn redwood and not endanger it. Further that "existing vegetation and trees shall be preserved to the maximum extent practicable consistent with the proposed use and development permitted and in accordance with the Virginia Erosion and Sediment Control Handbook, current edition.”

A response on July 27 indicates, “I suspect a lot hinges on what the County Attorney advises is reasonably necessary for the proposed use.”

The county indicates they have discussed alternative plans with the developer in an attempt to find a solution to saving the tree. But "the developer could not identify a design that both provided for the subdivision of the property and preserved the Dawn Redwood (sic)." Although the Dawn Redwood (sic) will not be preserved, the approved development plan does protect multiple large trees on the back end of the property ...."

The response also indicates the developer will replace the lost trees. Kit Norland, one of the founders of the Arlington Tree Action Group, indicates that while this may sound good, the replacement trees are always small trees that take decades to grow back to the height of the trees that were removed.

The county indicates the developers have considerable rights while the conservationists indicate the tree is protected because it is located in a RPA. According to section 61-17 of the Chesapeake Bay Preservation ordinance the county manager on behalf of the County Board may seek injunctive relief to enjoin a violation for a threatened violation of any provision of this chapter.

Residents wonder why he hasn’t done that. Norland asks in a letter to the County Board dated Aug. 15, “Why is the board not using this authority? Who or what prevents you, our elected officials, from applying the authority?”

Vihstadt said, “The board has asked the county manager and county attorney to collaborate on a public-facing document that will go into as much detail as possible in explaining the permitting process, the county’s site analysis in the context of the Resource Protection Area (RPA) and the rationale for the ultimate conclusion that the county could not legally mandate that the dawn redwood be saved.”

That’s the nub of it.

Who decides the ultimate fate of these trees located on private property but within RPAs and on what basis? Residents are asking was it due to lack of political will or lack of power?

And residents are worried it will happen again.