One More Battle in War of the Dawn Redwood in Arlington 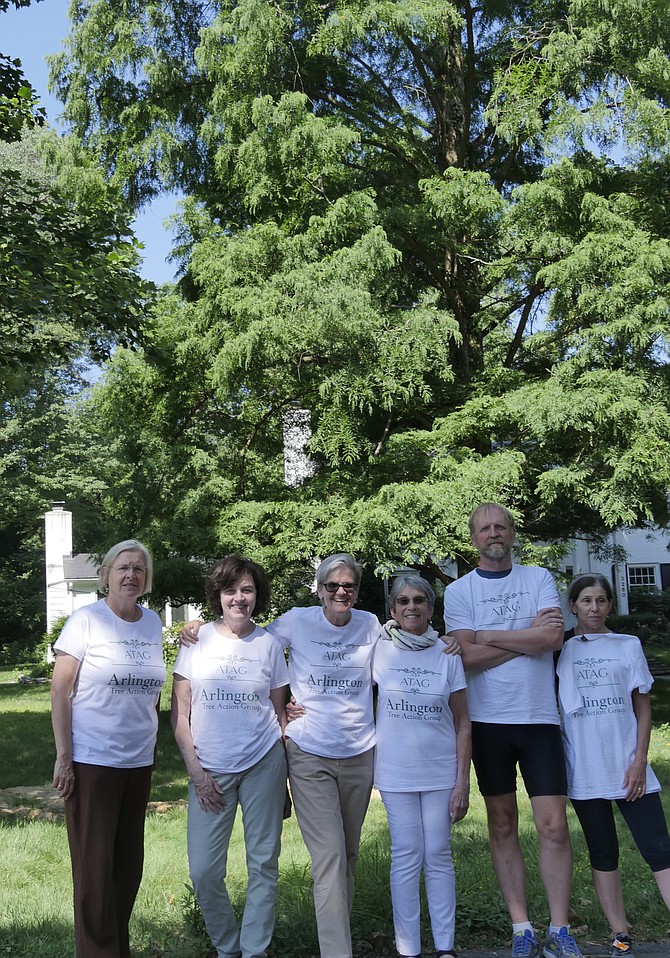 A group of local residents stand in front of a 114-foot high dawn redwood tree in a Resource Protected Area (RPA) on Ohio Street. They appeared at the County Board meeting on Saturday, July 14 to protest the removal of the tree in a proposed redevelopment by Richmond Custom Homes. Photo by Shirley Ruhe.

The battle is heating up between Richmond Custom Homes, who purchased a lot at 3260 N. Ohio Street, and a group of conservationists attempting to preserve a 114-feet high dawn redwood tree located on the property. The County Board sits in the middle.

A group of about 20 local residents, wearing green imprinted "Please Save Our Trees" T-shirts sat as a block of protestors at the County Board meeting on Saturday, July 14. Angela Dickey, spokesperson for preservation of the dawn redwood tree at the meeting, focused on the importance of the tree’s location in a Resource Protection Area (RPA). An RPA includes streams, rivers and other water bodies and environmentally sensitive lands within 100 feet of these water resources.The updated Chesapeake Bay Preservation Area map approved by the County Board on July 15, 2017 places the dawn redwood in one of Arlington’s RPAs.

Dickey was followed by speakers representing other Arlington neighborhoods with similar concerns including Upton Park, Lyon Village and Cherrydale. Mary Glass, who appeared on behalf of Donaldson Run, said, “There were really so many areas represented here that they have to take notice."

The owner-developer has indicated he plans to demolish the current home on N. Ohio Street, subdivide the lot and build two new six-bedroom homes. The plan involves cutting down the dawn redwood, the largest of its species in Virginia. The tree is designated as both an Arlington and a State Champion.

Arlington Tree Action Group (ATAG) in a June 25 press release declared, "This has the makings of a landmark case. A Champion Tree and the RPA in which it is located are at stake; the loss of either would call into question the enforcement of the Chesapeake Bay Protection Ordinance (CBPO), not to mention the county processes used to designate Champion Trees and RPAs."

After the purchase of the property, a petition was initiated in early June by an Ohio Street neighbor and within a week it had over 800 signatures. By the time of the County Board meeting, the number of signatures on the petition had grown to 1,047. The petition argued that the nearly 40,000 square-foot lot could easily accommodate the tree and still build the new homes. Since then neighbors have been searching for solutions from buying the lot themselves to transferring the tree to someone else's property to voting out board members who don’t support preservation of Arlington’s trees.

The president of the Williamsburg Civic Association sent a letter on behalf of its residents to the County Board on June 22 expressing "dismay and concerns regarding the proposed removal of a mature dawn redwood at 3260 N. Ohio." The letter points out the location of the dawn redwood in the RPA is protected by the "state and local law which generally prohibit the removal of trees in RPAs, to preserve precisely substantial environmental benefits ...."

The County Board responded on July 11 that “the tree is a state-recognized ‘champion.’ However in terms of legal protection, this is an honorary recognition only. The tree is not protected under state law or county regulation." The response explained there while there is a procedure to give a tree legal protection as a Specimen or Heritage Tree under the county's Tree Preservation Ordinance, it requires consent of the property owner. The previous owners of the property did not apply for either designation.

The board response explains: "The owner has considerable development rights under State and local law." However it indicated the county is exploring options for preserving the tree including direct discussions with the owner-developer, Richmond Custom Homes, as well as exploration of the ordinances related to the RPA which balances private property rights with maintaining effective buffer zones for water quality. Katie Cristol, chair of the County Board, and John Vihstadt, the board’s liaison to the Urban Forestry Commission, signed the letter.

While designation of a Champion tree appears to afford no legal protection, according to the Urban Forestry Commission (UFC) the tree’s location within the buffer zone of an RPA does give it protection. UFC weighed in with a letter to the County Board indicating the UFC meeting on June 28 considered the issue of the re-development of the property at 3260 N. Ohio Street. "This property is located within the Little Pimmit Run (of the RPA) and due to the small size of the surface stream is particularly sensitive to the effects of adjacent development."

The letter indicates two neighboring properties have recently adjusted their building designs to meet the RPA requirements. "According to (Section)61-17 of the Chesapeake Bay Preservation Ordinance: 'The County Manager on behalf of the County Board may seek injunctive relief to enjoin a violation for a threatened violation of any provision of this chapter.'"

However, County Board Manager Mark Schwartz indicated at the board meeting on July 14 the county-managed RPA has a strong advisory role but not with legal protection.

Kit Norland, one of the core members of the ATAG, added, “The County Board said this morning we really care but if we can't do anything it's not really our fault."

Glass says, “That's not really true; there are a lot of things they can do if they choose to do them."

A brochure issued by the Arlington Department of Environmental Services in November 2012 states under activities requiring RPA approval that “creating a new structure …. generally will require an exception request. In all cases the county will review the proposed RPA activity to ensure that water quality is protected.” It continues, “The removal of mature trees with a diameter of 3 inches or greater requires county review and approval.”

Norland declares the county's response "could not be more limp. Pathetic. Disappointing ... not much said about preserving the Resource Protection Area that runs the length of the property .... if the RPA means nothing here; what kind of precedent is being set?"

A Council of Governments (COG) for the Chesapeake Bay meeting is scheduled for July 27. Libby Garvey, chair of the group and a County Board member says the dawn redwood won't be on the agenda because regional cooperation rarely gets to that level of detail. "But what I hope will happen in that COG meeting is that we decide to work more closely to find solutions to the issues we all have of preserving existing trees in the watershed."

This battle to save the dawn redwood is part of a larger war in Arlington to save the tree canopy. The Williamsburg Civic Association in its 2017 Neighborhood Conservation Plan identified the loss of mature trees through development as one of the biggest concerns of residents. The letter from the Williamsburg Civic Association points out that Arlington's most recent Tree Canopy Assessment, the WPA has experienced a slight decline in overall canopy in recent decades and the specific site at issue here — the West branch of Little Pimmit Run has seen a decline of 5 percent in tree canopy in the last five years alone."