Race is annual tradition for this Virginia Run family. 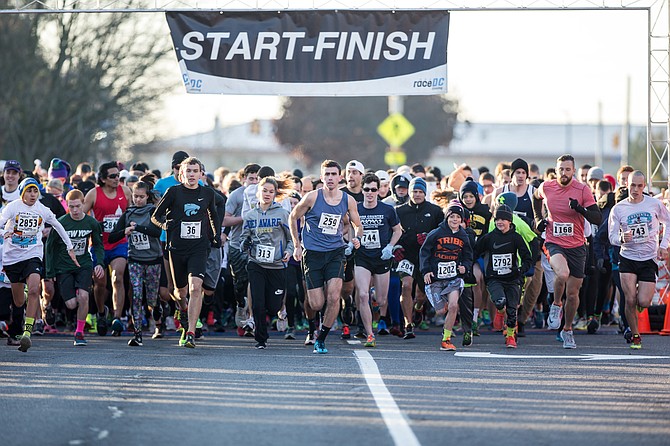 The starting line of the Virginia Run Turkey Trot in 2015. Photo by Fred Ingham 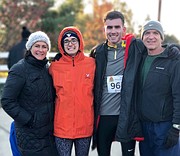 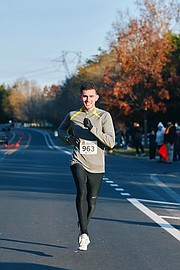 Johnny Pace (No. 963) about to cross the finish line at this year’s Virginia Run Turkey Trot.

For the second time, Johnny Pace, 21, of Centreville, won the Virginia Run Turkey Trot this year with a time of 15:12, beating out nearly 3,000 people. He also won the 5K race in 2015 with a time of 16:10. The four-year distance runner at the University of Virginia has been doing the race for 15 years, starting at age 5.

“Well, it really feels nice to win a race that’s so close to my heart and it’s always something I look forward to year after year. To win it after so many years of having run it, it feels great,” he said. “This year my strategy was to go out really hard from the start because as I’ve gotten older, I learned the pace that I can maintain over the distance. I tried to hit that and not look back.”

To Johnny Pace, the race is very much a family tradition for his dad John, mom Maria, and sister Didi, 19, who runs track for Washington and Lee. Even his extended family — from uncles, aunts and cousins as well as close family friends who have come from out of town — have run the race that courses through Pleasant Valley Road.

“It’s kind of been something I’ve grown up with…to me it’s what got me into running. I remember the first time I ever ran — I was training with my dad when I was 5 years old. Throughout the years, it’s been an opportunity to run with family and run with friends and to have a great time. It’s definitely something that has raised me in a way.”

He added: “Running has always been a way that I have fun, and to me there’s nothing better than getting up on Thanksgiving, for being away at school for so long, to just get out there — that’s my way of having a great time.”

He said Thanksgiving wouldn’t be the same without the Turkey Trot. “It’s always the one thing that’s always been constant is doing the Virginia Run Turkey Trot. A lot of times our family will come together at our house, it’s changed throughout the years, but we’ve always put the Turkey Trot as something that we like to do.”

He also appreciates that the race supports the charity Life With Cancer, having donated more than $1.3 million to it over the years. “I’ve always appreciated how that serves to commemorate people in our community who have battled cancer. My aunt and grandmother are both survivors. I think it affects so many people in our community and the fact that they try to commemorate somebody each year is really noble and makes it bigger than the race itself,” he said.

Johnny Pace is a four-year distance runner at the University of Virginia; he is studying finance and plans to graduate in the spring. “The University of Virginia has always been a second home for me, and I’ve enjoyed running for four years and getting a great education. It’s been such an amazing experience and has taught me so much about myself as a person and a runner, and I’m grateful for my great experiences I’ve gotten here and looking forward to where life takes me after.”

At UVA, he does three sports — cross country in the fall; indoor track in the winter; and outdoor track in the spring. He runs every day, sometimes twice a day, and averages about 80-100 miles per week. He said he never really has time off. “That’s a good and a bad thing. You’re always training; the training translates over the season; you still have to do the same type of training more or less, so we’re always building up. The training is more or less the same throughout the year.”

With his finance and management degree, after he graduates he would like to go into investment banking, private equity or financial wealth management.