‘Do Not Stand Idly By’
Votes

‘Do Not Stand Idly By’ 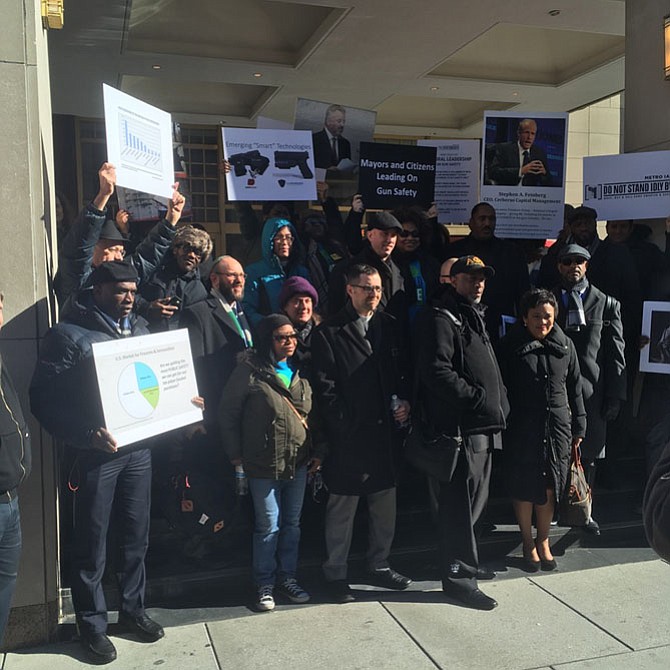 Metro IAF comprises 22 organizations, including VOICE in northern Virginia, in 10 states and the District of Columbia. Representatives converged in the capital to press the U.S. Conference of Mayors on Metro IAF’s “Do Not Stand Idly By” (DNSIB) gun safety campaign. The campaign title references a Bible verse: “Do not stand idly by while you neighbor’s blood is shed.”

A so-called smart gun uses technology, like fingerprint recognition, so that only approved users can fire the weapon. The National Rifle Association, a lobbying group, doesn’t oppose such technology in principle. But it “opposes any law prohibiting Americans from acquiring or possessing firearms that don’t possess ‘smart’ gun technology,” according to its Institute for Legislative Action website. The rationale is that such laws would serve “to prohibit the manufacture of traditional handguns, raise the price of handguns … and, presumably, to embed into handguns a device that would allow guns to be disabled remotely.”

Instead of changing laws, Metro IAF wants public sector purchasers of firearms and ammunition to put market pressure on manufacturers. According to Metro IAF, public sector purchasers make up 40 percent of the total domestic market — 25 percent from the military, 15 percent from law enforcement. Metro IAF believes that organizing purchasers to buy smart tech — and to apply shareholder pressure, if they’re invested in gun companies — could create incentives for manufacturers to incorporate such tech into their products. Currently, 123 public and law enforcement officials, including Virginia Attorney General Mark Herring, have associated themselves with DNSIB.

“Forty percent of the purchases of weapons in this country every year are made by our mayors and police chiefs and sheriffs and governors and our federal government. That’s real purchasing power,” said Metro IAF’s Rabbi Joel Mosbacher at a public briefing after he addressed the mayors’ conference. That “is the key to our campaign.”

Linda Reid from Milwaukee’s Common Ground, a Metro IAF affiliate, showed off a new fingerprint-activated trigger lock manufactured by Identilock, a Detroit-based company. After learning of it from Common Ground, a police chief in that area authorized officers to purchase the device using department funds. This particular device has gained some preliminary NRA approval. One NRA publication included the Identilock trigger lock on its 2017 holiday gift list. Another noted that the tech allows for fast access and easy mobile carrying, such as in a car or purse.

“Instant access is really important to a lot of gun owners,” said Reid. “This [technology] is a huge step forward. If this makes in on the market, it could draw funding dollars … for other smart technology. … Because this local police department was so excited about it, they’re inviting [the product developer] to present it to all the Milwaukee County departments. … It’s our foot in the door to get user acceptance of this technology.”

The Alexandria police department currently secures its weapons through “other means,” which are much cheaper than smart tech, said Mayor Allison Silberberg.

She says cost is an important consideration for the city’s budget, but would encourage private gun owners to consider such options.