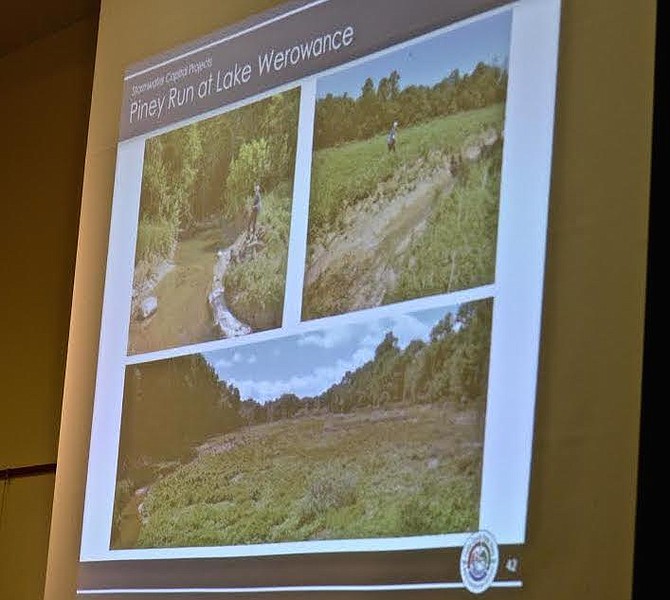 Before and after photos of Lake Werowance in Great Falls. When the dam failed during major storms about five years earlier, the lake disappeared. The county’s plan to improve the Piney Run stream rather than rebuild the lake drew sharp opposition from the committee members in attendance. Photo by Andrea Worker.

From left: Great Falls residents Robert Vickers, Jerry Peters and Glen Sjoblom all had concerns about the proposed plan for Lake Werowance and questions about how the county identifies and prioritizes stormwater and watershed management projects. If the process is not done thoroughly and with transparency “you lose credibility and then you lose the environmental argument,” said Peters.

From left: Committee co-chair Karen Keegan, members Bill Canis and Eric Knudsen participate in the discussion. Knudsen raised concerns over stream management along the Route 7 widening project. “It looks like they are cutting corners to keep the costs down” by designing the waterway as a straight-shot channel rather than in a more natural meandering configuration.

“Don’t get me wrong,” cautioned William Denk, co-chair of the Great Falls Citizens Association Environment and Parks Committee. “I appreciate the partnership we have with the county, they have demonstrated a lot of cooperation with our citizens, but we still have questions and concerns.”

Denk was describing his “take-aways” from the group’s February meeting. Matthew Meyers, Chief, Watershed Project Implementation Branch/Storm Water Planning Division for Fairfax County’s Department of Public Works and Environmental Services and Jonathan Witt, an ecologist with the Watershed Assessment Branch accepted an invitation to speak at the meeting and bring the committee up to speed on watershed projects throughout the county. Denk noted that Meyers, and other county staff have met with the group on several occasions and have been accessible for questions and comments.

Despite the kudos for county personnel, however, Denk, and other members of the committee are not satisfied with the current state of affairs. “it seems like they are saying that we are just not losing ground as fast as we used to,” remarked Denk when considering the presentation made by Meyers.

Meyers provided an update on storm water management and watershed improvement activity throughout the region, but the two projects that raised the most concern among the attendees were the plans for Lake Werowance and for stream management along the Route 7 widening undertaking – plans that directly affect the residents of Great Falls.

“WHERE THE LAKE ONCE WAS” is how Meyers says many locals now refer to Lake Werowance. Major storms some five years ago effectively destroyed the dam that had turned the private lake into a Watershed Improvement reservoir to address flooding to roads like Walker Road, Murphy Drive and Manning Street that border it and to improve water quality as it flows toward the Potomac. Already affected by years of sediment build-up, once the dam went, so did Lake Werowance, spilling away from its enclosure, and leaving the area mostly dry.

There’s little disagreement between county personnel and Great Falls residents that the “Once Was” lake needs attention. “It’s good to hear that there is a planning process underway,” said committee member Eric Knudsen, as Meyers discussed the awarding of a study contract for the project, but there was plenty of opposition to the solution that Meyers and the county are proposing.

“They don’t seem to be exploring the options,” said Knudsen.

Jerry Peters is also a member of the Environment and Parks Committee. Peters has a Masters Degree in Environmental Science and Engineering and a background that includes environmental consulting. He commented that “it seems they [the county] came to a conclusion on how to proceed with this significant project without much public involvement and without doing any comparisons between the stream project they are suggesting, versus rebuilding the dam and restoring the lake, which is what many of us in Great Falls would like to see happen.” Peters believes that the more cost-effective option in the long run would be to revive the lake.

“I don’t have the answers,” said Denk, who knows people who once swam in the lake in years gone by, but he does think that a solid cost estimate for both, and perhaps other, options, should be developed and made known before more public funds are spent. “They are talking $500k just for the first study. Let’s make sure we are using the money wisely, now and going forward.”

DURING THE MEETING, Meyers and Witt both presented reasons why rebuilding the lake might not be the answer, including costs associated with maintaining it after restoration. The expense of periodic dredging and other maintenance needs were a few of the considerations that have the county looking at the stream restoration alternative, but Great Falls resident Glen Sjoblom responded, “You’re not answering our questions. You haven’t given us an estimate of rebuilding the dam or on the maintenance.” Sjoblom wonders why “so much dredging” is needed when the lake existed for years without such major interference. He also questioned the expense of supporting materials compared to the cost of the initial dredging and restoration of the lake to its original state.

More concerns were raised about the plan to have the stream modification along Route 7 be a “straight-shot channel” versus a more natural, meandering configuration, which the attendees noted that even Meyers said is the preferred outline to best control water flow.

Bill Canis pulled no punches in his comments. He acknowledged that the project is really under the control of the Virginia Department of Transportation (VDOT), and referenced another meeting during which he says VDOT employees expressed pleasure in being able to circumvent certain environmental regulations and recommendations because of having started the project before new rules went into effect. “It’s appalling to hear State officials say this. It’s beyond the pale. I hope that the county will stand up for us.”

After the Lake Werowance and Route 7 projects, the topics that garnered the most commentary were the budgeting and funding processes and the methods employed to prioritize projects for consideration.

“It was helpful to see how the funds are divided,” said Peters, referring to a pie chart that Meyers presented that breaks down how monies are allocated, and “it seems reasonable.” Less pleasing was the news that the funds that developers contribute to offset the environmental impact of their projects are not required to be utilized where the project is located. Denk and others questioned the equality of that equation.

When Denk reports back to the Great Falls Citizens Association on the results of the meeting, he plans to tell them that the good news is there is still positive dialogue between the residents’ representatives and the county personnel. Meyers and Witt both agreed that the committee’s concerns and suggestions would be reviewed and considered and answered.

Denk will also report that the community must continue to be involved in order to protect the welfare of its citizens. He hopes to see more of his friends and neighbors at meetings like this one, keeping themselves informed and insuring that the residents’ voices are heard.

INFORMATION about all of the watershed and stormwater management projects is available on the county’s website at www.fairfaxcounty.gov. The Great Falls Citizens Association website is www.gfca.org for more information and to learn how to get involved.