Olympics-Focused Learning and Fun in Herndon 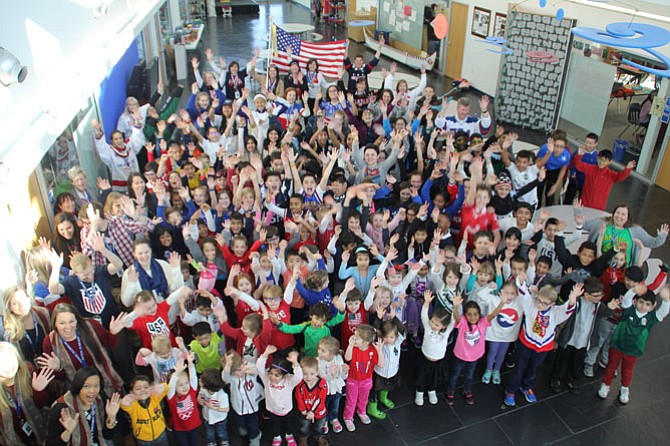 Gathering to kick off Winter Olympics Day at the Nysmith School. Photo courtesy of Justin Cooper 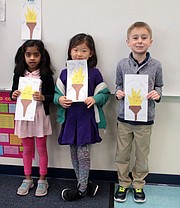 From left: first graders Gia Jagadesh, Julie Zhao and Jason Cresswell, Jr. show off their own versions of the Olympic torch.

It’s not all about the classwork at the Nysmith School. Healthy activities are part of learning, too. On Winter Olympics Theme Day, students practiced “ice” sports, “skiing” and even the “biathlon.”

6,921.22 miles away from Herndon, Virginia, hundreds of athletes from 92 different countries have gathered to compete in the 2018 Winter Olympics. A lot closer to home, there was plenty of comparable spirit, enthusiasm and skill – albeit more mental than physical – on display at the Nysmith School for the Gifted as students, representing 55 different national backgrounds, participated in their own Winter Olympics Theme Day.

Staff and students dressed in a variety of sports regalia to go for the educational gold as each class undertook lesson plans that incorporated Olympic-related activities.

The second-graders in Ms. Jones’ class were busy measuring distances achieved in such events as marshmallow “snowball” tossing, ice cube luge runs and even marble curling.

The kindergarten science room gang were working on their hypotheses (and yes, they did use that word to describe their theories) as they tested whether a variety of items might or might not slide on homemade mini-ice rinks.

The third graders got in on the action, as well, applying factoring mathematics to a number of Olympic events and moves.

The seventh grade environmental sciences class used their study of earthquakes to construct an Olympic stadium model designed to withstand the effects of quake waves. These young scientists/architects are planning ahead for the 2020 Summer Olympics that will be held in Tokyo, near the fault line of two geologic plates.

It wasn’t all classroom action, though. One half of the gym was converted into a pseudo hockey rink, while the other half hosted a Nysmith version of the biathlon competition, with students cross-country “skiing” and then taking aim at a line of targets set up on the auditorium stage.

Whether they are participating in the academic arenas or in fields of physical activity, the Nysmith students give it their all. “When we say ‘learning is fun,’ we all really mean it,” said school director Ken Nysmith. Shouts of “Yes!” “Got it!” and “Score!” from the classrooms and the sporting venues seem to echo through the hallways in agreement.

More information about the school is available at www.nysmith.com and on Facebook.