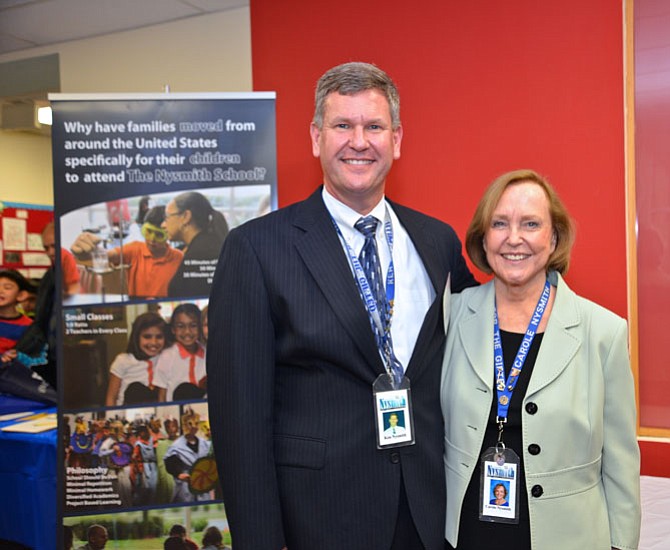 The Nysmith School Principal Ken Nysmith and school founder – and the principal’s mom – Carole Nysmith welcome the public, sponsors, speakers, and exhibitors to the 2015 K-12 STEM Symposium of the National Capital Region. Photo by Andrea Worker.

With Fairfax County police officers directing the line of cars and the pedestrians crossing EDS Drive from the overflow parking lot, you would be forgiven if you thought all this activity was because of a sold out rock concert or championship sporting event. What was taking place, however, was much more important than any type of entertainment. The Nysmith School was hosting the 2nd Annual K-12 STEM (Science, Technology, Engineering, Math) Symposium for the National Capital Region, featuring speakers, panel discussions, exhibits, hands-on experiments for children, and materials about government and industry Stem-related high school and college internships.

Under the umbrella of the WashingtonExec’s Stem Council and their over 20 private/public sector leaders, the programs offered engaging opportunities for students, teachers, parents and members of the worlds of government, academia, and private and nonprofit organizations to spark STEM interest from the students, encourage parent involvement and to support educator creativity and commitment.

THE FIRST PANEL discussion addressed some of those needs with speakers from Google and the National Geospatial-Intelligence Agency. After a break, event co-chairs Dr. Evan Glazer, principal of Thomas Jefferson High School for Science and Technology in Alexandria, and Lou Von Thaer, president, National Security Sector of Reston-based Leidos, continued with that theme.

“High Schools and colleges are producing less graduates in the tech fields,” said Von Thaer, “when we already need 20 percent more engineers than we have, and with the need still growing.” What is most lacking in the pipeline? was a question from the floor. “Deep math and deep physics,” responded Von Thaer, “essential skills for the critical areas, like cybersecurity and the protection of our vital technology-dependent infrastructures. We are worried,” he acknowledged. “That is why we organize events like these, and sponsor the cybersecurity and robotics competitions.” Lego Robotics competitions have been added to the arsenal, looking to encourage interest in STEM fields from the earliest ages.

Principal Glazer led a section that had a large number of audience members taking notes. It was his job to make the presentation on the Symposium’s subtitle: “The Parent Factor: How to Engage Your Children in STEM.” Glazer provided numerous useful tips from several studies and his own years of experience. Symposium attendees received access to a free Parent-STEM Action Plan via the symposium’s website. The most important takeaways from Glazer’s speech? STEM studies are not just for “those really smart kids.” “STEM is for everyone and there are a lot of affordable resources for all families,” he added. Glazer believes that the parents’ appropriate involvement (“encouragement, support and offered options – not forced direction”) is the key to engaging STEM interest in their youngsters.

The afternoon panel started off with the address by Sen. Tim Kaine (D) who was joined on stage by the Commonwealth’s Secretary of Education, Anne Holton – who just happens to also be the Senator’s wife. Kaine, who had “really wanted to be on the Senate’s Education Committee, but it wasn’t to be,” echoed the words of previous speakers. “You waited too long if you waited until college to get involved in STEM fields of study.” Kaine works with a bipartisan group to advance career and technical education and believes that such knowledge can come from a variety of education sources, from traditional colleges and universities, to technical educational centers. In response to a question from TJHS freshman Varun Saraswathula, Kaine told the audience he was deeply involved in updating the old “No Child Left Behind” legislation that has expired, and, in any case, “needs to be updated to reflect the current climate and our needs from our education providers.”

The panel discussion that followed Sen. Kaine’s and Ms. Holton’s remarks focused on the career paths open to SEM students – and how much fun those career choices can be. The panelists were former Naval F18 Top Gun Pilot Eric Schierling from Vencore, Inc., former astronaut Kenneth Cameron, Colonel USMC (Ret) now with SAIC, and Pooja Chandrashekar, a student at Thomas Jefferson High School for Science and Technology.

WHEN NOT LISTENING to the speakers, the symposium attendees spent their time wandering the halls of the Nysmith School where dozens of exhibitors had set up booths with information and demonstrations. A number of Nysmith students were also manning booths, explaining their science projects (many of them award-winning) and their STEM-related activities. Nysmith has the Cybersecurity Middle School Competition State Champion Team. The team is in preparation for the National Finals next weekend. Want to know more about STEM fields of study and how to engage the next generations in preparing to answer the call of the future? Check out the STEM Symposium website www.stemsymposium.com, where you can download the Parent STEM Guide. The Washingtonexec’s website, www.washingtonexec.com also posts STEM information and upcoming STEM related events.