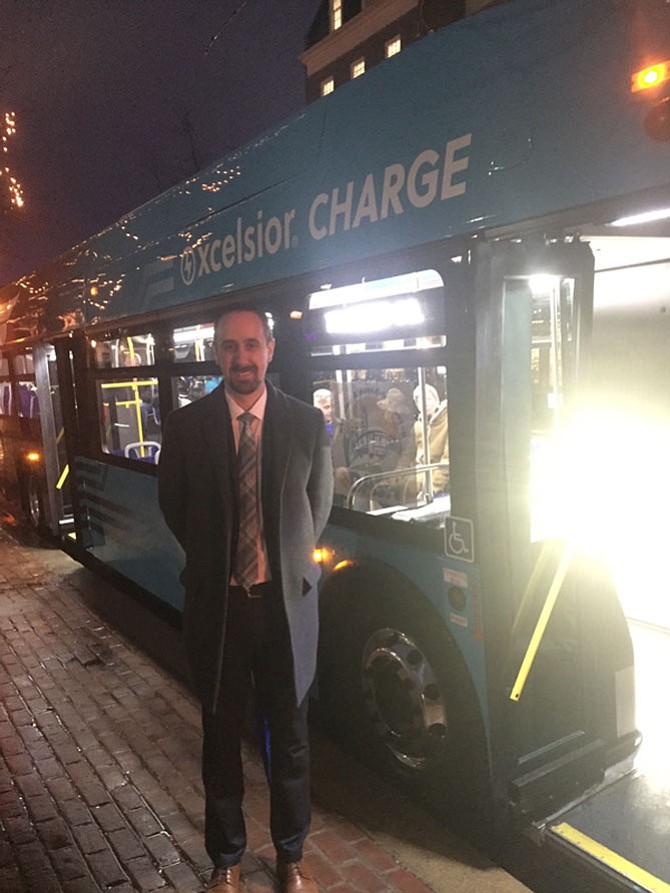 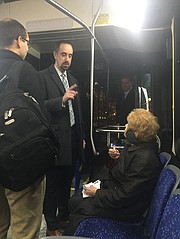 This last week, as you were waiting in the rain at the side of the road for a DASH to take you across town, the bus that arrived might have looked a little different. It may have been a little cleaner, a little quieter, a little smoother of a ride. When you swiped your pass, you might have noticed that you weren't charged. Congratulations, you were one of the first Alexandrians to test out the new all electric bus.

The all-electric bus was temporary, on loan for a week to let Alexandria test out the functionality of the kind of bus fleet it is slowly working toward. Josh Baker, appointed general manager of DASH one year ago, said DASH has a commitment to eventually replace all of its diesel powered buses with electric ones. So far that’s been a gradual transition, with the City Council opting last November to buy 27 new “clean diesel” buses instead of 17 hybrid electric buses to replace the 34 existing old diesel buses that failed to meet environmental standards.

The Xcelsior Charge bus will only be driving around Alexandria for one week as part of a pilot partnership with New Flyer Industries of America. A computer system onboard the bus will track the bus’ progress, battery usage, GPS, and perform other system analysis.

At a special demonstration and display in front of Market Square on Feb. 7, city councilors, staff, and a few members of the public interested in transit packed into the bus to provide cover from the rain. The bus took a loop around Old Town while David Warren, director of sustainable transportation for New Flyer of America, explained the logistics of the bus.

It has 6000 pounds of lithium ion batteries on the top of the bus and runs at four to five times the efficiency of a traditional combustion engine. These are all things bus people care about, but even for those not interested in the technical know-how of Alexandria’s buses, the details of electric buses are part of an important ongoing discussion about how the city approaches climate change and public transit. Mayor Allison Silberberg and Vice Mayor Justin Wilson, both running for mayor in the Democratic Primary, spoke in favor of the buses and expressed their commitment to moving Alexandria toward a more environmentally friendly bus fleet.