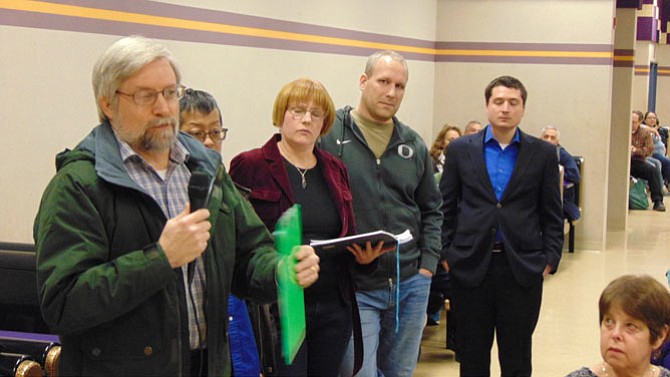 Joe Robinson of Ravensworth asks a question at the meeting. Photo by Steve Hibbard.

A crowd of 200 packs the cafeteria of Lake Braddock Secondary School.

About 200 people attended a meeting on the future of Lake Accotink Park sponsored by Supervisors John Cook (R-Braddock District) and Jeff McKay (D-Lee District) on Tuesday, Feb. 13, 2018, at Lake Braddock Secondary. They discussed Lake Accotink filling up with sediment – a process that is accelerating – and dredging options to fix the problem.

The Supervisors wanted to make their presentation and hear feedback from the community. The first meeting on the topic was on March 14, 2016, with a total of six meetings thus far – and many more to come. Using a slide show, Cook presented six different options for the lake. Afterwards, they took questions from the audience.

To some residents, the lake is a true gem – it’s their solace and Zen. They wanted to know what will happen to its paved trail and all of the sporting events that take place around the Marina. They asked which recreational options would still be available, and what would happen to the wildlife and ecosystem – especially the bald eagles. Still others wanted to know how the dredging would affect their property values.

Cook said the Park Authority had been going through a Master Plan Review for Lake Accotink Park over the past couple of years, which led to a one-year study of the lake itself. The first decision that needs to be made is to decide what to do with Lake Accotink, he said.

“The reason why Jeff and I are up here as opposed to the Park Authority is the Park Authority does not have the money in its budget to be able to handle the dredging recommendations which would be needed to preserve the lake,” said Cook. “That would be something the County would have to take on in the general fund budget through a Bond Referendum. That’s why it’s in the hands of the Board of Supervisors to look at that funding. Before we make decisions on that, we like to hear from the community.”

McKay said Lake Accotink is a regional park that brings in a regional draw from multiple magisterial districts. “For me personally, I’m emotionally attached to the lake. I grew up in that area; I went to the lake all the time as a child. I feel very strongly about it. However, we want to make sure we understand how the community feels because this is going to be a decision that is driven by community input. This is a major undertaking,” he said.

Here is a synopsis of Cook’s presentation on different options for the lake:

OPTION A: What if we do nothing? If we do nothing, the lake on its own will disappear by the year 2025, said Cook. That’s how fast it’s filling up with sediment. So, there is some timeliness to our decision making. We would need to spend about $13,000 a year on dam maintenance, and every 30 years there would be $4.7 million spent on dam repairs. That’s the do-nothing option.

OPTION B: What if we do what we have been doing, which is doing dredging every time it needs it. The last dredge in 2010 cost $9 million. The next one will cost $29 million. Dredging is a $29 million item and the dredge would only last 15 years. Each dredge has a shorter and shorter time span. In my view, this option is a temporary fix only because it is no longer cost feasible, said Cook.

OPTION C: Dredging of the lake, which will be a large dredge. The dredge before was 350,000 cubic yards. But the full dredge is a 500,000-cubic yard dredge. It would last 30-35 years. We would build one or four forebays, a mini lake, and you put it at the beginning of the big lake. It catches sediment and every year you dredge the little lake. It’s a relatively minor dredge. That captures most of the sediment so it doesn’t go into the big lake. This option preserves the lake in its current form but costs $45 million. Every year, there would be a $770,000 maintenance expenditure to dredge out that forebay and those dam expenditures we had before, said Cook.

OPTION D: Is a temporary fix. The Park Authority has opined that it is not a good option but we keep it in here. It would involve construction of beaver dams upstream that capture sediment so that it doesn’t reach the lake. But the problem is they fill up in five years. This is a temporary five-year holding pattern, said Cook.

OPTION E: Taking the dam away, which takes the lake away and retains a stream and creates a stream valley. It would cost $11 million to take down the dam. There’s no annual expenditure anymore, except $26,000 to take care of plant life. This would change permanently the topography. There would be no lake; it would be a stream and a forest. This would be a permanent change, said Cook.

OPTION F: Looking for a middle ground. In this option, the stream is retained separate from a smaller lake by building up a berm in the middle. There’s a smaller lake of 20 acres, as opposed to 50-60 acres on the big lake. So, the idea is it wouldn’t fill up with sediment because the main stream would not go through it. So, it would probably stay in stable condition a long time. It would be half the size of the current lake.

McKay said what he’s trying to do is get a groundswell of community support for one of the options. “If we decide we don’t want the lake anymore, if that’s the decision that’s made, it will shape this park indefinitely. If the decision is we keep the lake, then John and I are going to do everything we can to pay for that,” he said.

He said the problem is that silt is coming in at a faster rate than it has in the past. “Clearly, development is contributing to it. Some of this problem has built up over time, it’s been accelerated. It’s the silt coming into the lake, that’s the driver of it. If we could point to a source of where this is coming from, we would fix that source. But you have silt being collected from a lot of different areas. It’s hard to pinpoint one source for this,” he said.

IN TAKING QUESTIONS from the audience, Cook said dredging requires moving the dirt, and that’s done with lot of trucks. He said this would be a dry dredge. “We would have to empty the lake and dig it out dry. It would have to be shipped to King George County, or areas that can take fill dirt. We’re talking about enough dirt to fill Fed Ex Field,” he said. But before they would do anything like that, he said they would have many meetings with residents to talk about the details.

McKay said he’s been through this dredging before. “We know the impacts that are out there. They are significant. If we were to choose a path of dredging, there would be many meetings to choose the best methods to do that.”

Cook said if Option A is picked, the dam stays and the lake fills in and becomes swampy. “If the dam comes down and turns into a stream, that will be a meadow and a forest. So, the environment is different in each of these options. I suspect if the lake goes away, the birds will go too, and other animals will come in. You’ll have a different ecosystem that will come in,” he said.

Regarding the timing of the lake decision: “We don’t have a final answer on a time frame but I think the decision needs to be made in this calendar year. If a funding action is needed, the bond needs to be on 2019 ballot,” said Cook. “I’m thinking in terms of doing outreach throughout the spring and coming up with a decision in the next six months.”

McKay ended the meeting by saying: “This is about us gathering information from you to help guide the process. This is a step in the process. We will continue to have more meetings. You will be involved in the process.”

Springfield resident Shane Shroeder, who spoke at the meeting, started a Facebook Group called Save Lake Accotink, which now has 1,600 signatures. He also started a Save Lake Accotink Instagram account and Save Accotink Twitter account. There’s also a www.SaveLakeAccotink.org web domain. “We made flyers tonight and will be distributing them around the county and making yard signs. The whole point is to raise awareness on this issue,” said Shroeder.