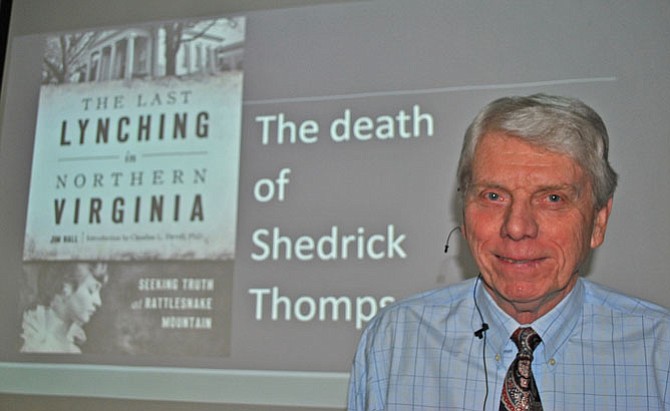 The Osher Lifelong Learning Institute at George Mason University provides opportunities for mature adults to explore intellectual and cultural subjects as well as share their experiences and talents.

In 1932, the body of Shedrick Thompson (a black man) was discovered hanging from an apple tree on Rattlesnake Mountain in Fauquier County. Soon a crowd gathered and set fire to it. When a deputy sheriff tried to put out the flames, a man stuck a pistol in his ribs and said, "Let it burn."

Virginia author Jim Hall enthralled a class of 80 at the Osher Lifelong Learning Institute (OLLI) at George Mason University on Thursday, Feb. 1, with details from his book, “The Last Lynching in Northern Virginia.” Hall provided an examination of lynching in Virginia, particularly the more than 100 incidents that occurred throughout the state from 1878-1932. He emphasized Thompson's hanging and theories about his motive when he attacked his employers, a white couple, assaulting the husband and abducting and raping the wife.

When Thompson’s body was discovered two months later, officials ruled his death a suicide. Fauquier residents, then and now, disputed that verdict, saying that Thompson died at the hands of his neighbors.

Hall’s book thoroughly explores both theories through interviews with relatives, townspeople and law enforcement officials, as well as exhaustive details gleaned from newspapers, court records, and other documents.

The significance of whether Thompson’s death was due to lynching or suicide was very significant for Virginia, a commonwealth which preferred to believe that its last lynching had occurred in 1927, and that the state had since reformed. Organizations including the NAACP contested this decision, and “The Last Lynching in Northern Virginia” effectively proves their point.

Author Jim Hall is a retired newspaper reporter. His book is a fascinating read, impressively well researched and festooned with fascinating photographs. “The Last Lynching in Northern Virginia” is available in Fairfax County Public Libraries.