Fairfax: Those Critters Around Us
Votes

Fairfax: Those Critters Around Us 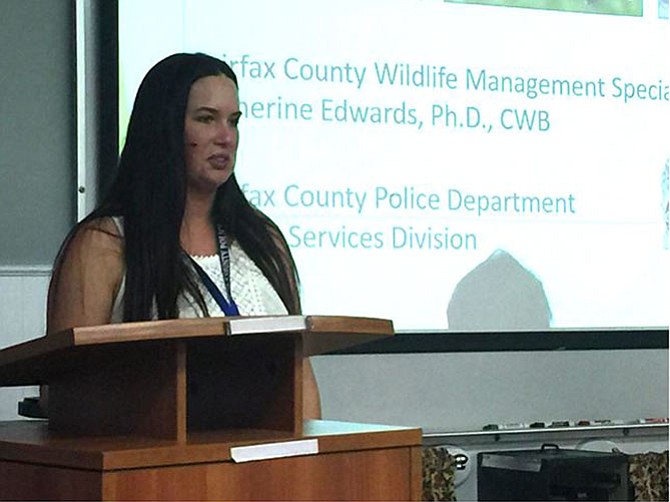 By Bill Ackerman/Member of OLLI Mason

“Possums get a bad rap,” said Fairfax County Wildlife Management Specialist Dr. Katherine Edwards during a presentation on “Those Critters Around Us” to the Osher Lifelong Learning Institute at George Mason University (OLLI Mason) last week. Edwards’ goal at OLLI was to educate Fairfax residents on how to act appropriately and safely with the county’s surprisingly large and diverse range of wildlife species.

According to Edwards, opossums may seem to be pests, but they are voracious consumers of ticks, and are among the least likely of the local wildlife community to carry rabies. Bats are another group that have an undeserved bad reputation, she said. Bats are huge insect eaters, and some species numbers have been severely reduced by the white-nose syndrome fungus. In particular the little brown bat, once one of the most common species in the region, was recently listed as state endangered in Virginia.

In recent weeks Edwards has fielded a number of calls about red foxes, which have been exhibiting bolder behavior than usual as a result of living in close proximity to people. Foxes can make some startling noises, and are active this time of year as the kits are out with their parents, learning to hunt. Edwards cautioned that foxes, as with all wildlife, should be appreciated from afar.

When it comes to Canada geese, Edwards observed that people “love ‘em or hate ‘em”. Currently they are molting, gathering together in groups for protection as they are temporarily flightless. While there are migratory Canada geese, people mostly observe the year-round “resident” populations, which are descended from captive populations used many years ago as decoys by hunters to attract migrating geese.

It is no surprise that high on the list of human/wildlife interactions is the white-tailed deer. Deer have high reproductive potential and are abundant in Fairfax County. A healthy doe can give birth to ten offspring in its first five years, Edwards explained. One potential long-term impact on white-tailed deer is predation of fawns by coyotes, which may be on the increase in the county.

What discussion of local wildlife would be complete without mention of the striped skunk? Edwards closed her presentation with a video of young skunks stamping their front feet to ward off danger. She warned residents who see such behavior to back away slowly. This is a signal that you are too close. Skunks can spray accurately up to 15 feet but rarely do so without provocation or without first giving warning signs, such as raising their tail.

For more information about the “Critters Around Us” in Northern Virginia, visit the Fairfax County website: www.fairfaxcounty.gov/living/wildlife/