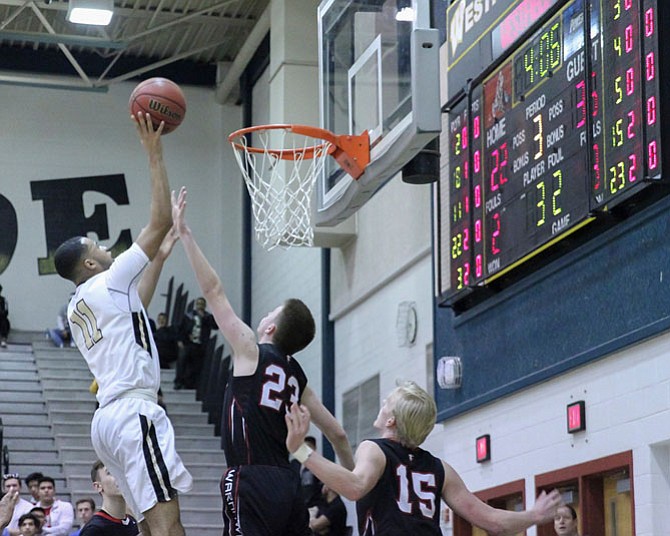 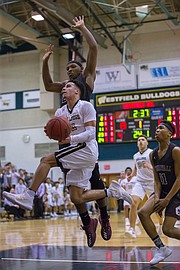 Jordan Hairston #2 has company from a Stonewall Jackson defender in Feb. 20 game. 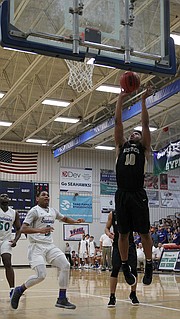 DJ Gregory lays in two of his nine points against South Lakes on Feb. 21.

The Westfield Bulldog boys faced the visiting Stonewall Jackson Raiders on Feb. 20 in the 1st round of the 6D Regional.

After both teams scored 15 first quarter points, the home team Bulldogs were able to repeat that while holding the visitors to just 13.

Trailing 30-28 in the 3rd quarter, Stonewall Jackson would overcome that deficit and and take the lead 45-44 with eight minutes to play in regulation.

After the two were knotted up at 53 midway through the 4th, the Raiders would build a 65-58 lead with 48.5 seconds to play. After a Bulldog three-pointer with 34.5 seconds and another Stonewall Jackson score, Westfield still trailed 67-61. Westfield was not finished. Another successful three-pointer the score was 67-64. The Raiders again scored to take the lead to 69-64 with 29.4 seconds to play. Westfield's Jordan Hairston would convert on another three-pointer with the score now 69-67. Westfield would then foul Antonio Warner who made one of his two free throws giving the visitors a lead of 70-67 with 9 seconds to play. Westfield would hurry down the court and find Marshall Reed on the far corner of the baseline nearest to the Stonewall Jackson fans. Reed would convert his fifth successful three of the game to send the game to overtime, 70-70.

In the overtime after both teams had scored a basket, Westfield was able to capitalize and take a 74-73 advantage with just 1:31 to play. Stonewall Jackson's Jordan Warner then converted a shot from the top of the key to give them a 75-74 lead with 24.3 seconds. Westfield again went to Reed who this time used his strength to muscle in the paint and bank in the game winner with 11.4 seconds remaining.

After advancing to the 2nd round of the 6D Region the Bulldogs traveled to take on South Lakes on Feb. 23.

Halfway through the game Westfield would lead 33-24. South Lakes would outscore the Bulldogs 35-26 in the second half to force overtime for the second time in as many games for Westfield. With the gamed knotted at 59 to start overtime, Westfield would get 4 points from both Jordan Hairston and Aaron Opoku , and DJ Gregory and Taylor Morin the other 3 points and Westfield would survive to the semifinals of the Region Tournament to take on Madison. Westfield was led by Marshall with 24 points. Cameron Savage led South Lakes with 14.

In the semi finals of the Region 6D, Madison would open the 1st quarter with a 14-4 lead and Westfield would never recover, losing 61-46 and ending their season. Madison advanced to play the Battlefield Bobcats for the Region Final. Westfield was led by Jordan Hairston's 16 points and DJ Gregory's 9 points. Madison was led by Aaron Darab with 23 points and John Finney's 18.