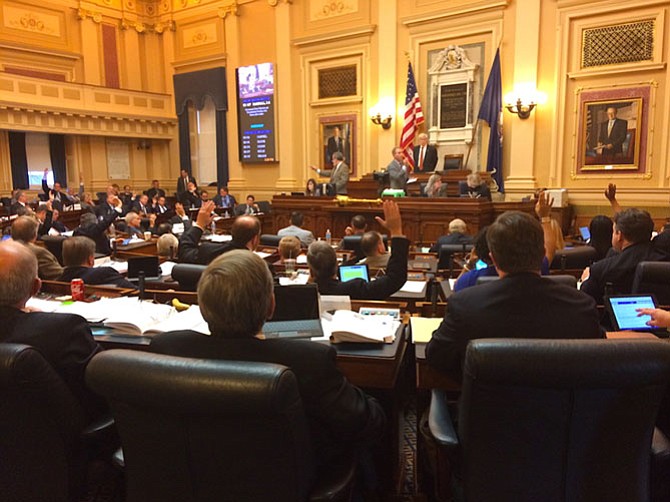 “I think what’s really important for us, as Democrats, is to identify on the other side who we could have come over and join us. … Who’s going to be in a position where they’re going to have to be supporting the progressive values that were voted in as a wave across the commonwealth.”

At the top of the agenda for the Democratic freshmen is expanding Medicaid to 400,000 people who would be eligible under the Affordable Care Act.

“I think what’s really important for us, as Democrats, is to identify on the other side who we could have come over and join us,” said Kathy Tran, who flipped a formerly Republican seat held by Del. Dave Albo (R-42) for more than 20 years. “We’re going to have to reach out and basically identify who’s really vulnerable and who’s going to be in a position where they’re going to have to be supporting the progressive values that were voted in as a wave across the commonwealth.”

Even if they’re successful navigating the diminished House Republican caucus, House Democrats will still have to deal with a Republican-controlled Senate. But the culture in the Senate is more moderate, and Republican senators have a history of supporting bills that have been routinely blocked in the House.

For example, Senate Republicans have a history of supporting the effort raising the threshold for grand larceny. That’s an issue that Democrats have been pushing unsuccessfully for years that may now finally have a chance in 2018.

“We heard during the gubernatorial campaign, Ed Gillespie was supporting an increase so this is one of those issues that — especially with the outcome of the election — I think you can see some support behind,” said Del. Patrick Hope (D-47), who is introducing a bill that raises the threshold from $200 to $500. “If someone makes a dumb mistake and walks out of a store with something small we shouldn’t make a felon out of them.”

THE WAVE ELECTION of 2017 was widely seen as a reacting to the Trump administration, and some of the bills that are now being crafted are also a reaction to the Republican agenda in Washington. State Sen. Dave Marsden (D-37) is putting together a tax reform plan as a Virginia answer to federal tax reform that gives tax cuts for the wealthy and corporations. Marsden wants to eliminate the food tax, reinstitute the inheritance tax and increase the gas tax. His tax-reform plan also taxes some services for the first time. For example lawn care and dry cleaning would be taxed but lawyers and doctors would not.

“Ever since I’ve been in the legislature I’ve heard complaints that we have a 19th century agriculture and manufacturing tax base but we’re now a service economy. So this will start to tax some of those services,” said Marsden. “We’re trying to draw a distinction and get the discussion going around which services are optional for people and which ones are really necessary that we shouldn’t burden them with taxes on.”

Democrats are also eager to finally get some traction on gun control, which House Republicans have blocked for years. Back in 2015, Democratic Gov. Terry McAuliffe was able to forge a deal with Republicans to make state police available for voluntary background checks at gun shows. Now Democrats are hoping that newly reconstituted House committees and subcommittees might give them a chance to at least get gun control legislation on the floor rather than having it killed in subcommittee, a strategy Republicans used that allowed them to avoid being on the record voting against banning assault weapons, for example. State Sen. George Barker (D-39) is introducing a bill that would allow judges to confiscate firearms from individuals they consider dangerous.

MANY OF THE BILLS lawmakers are working on involve unfinished business from previous sessions. State Sen. Scott Surovell (D-36) is working on a bill that would force Dominion to clean up decades of pollution at several coal ash ponds throughout Virginia. Dominion Energy plans to seal the pollution in place and put a cap on the ponds, which is significantly cheaper than cleaning up the pollution. But Surovell wants to require that the utility recycle the coal ash into concrete or ceramics. And, Surovell adds, it won’t actually be more expensive for Dominion at all because the utility will end up passing along the cost to people who are paying for electricity .

“You eliminate the possibility that this toxic gunk will continue to leak arsenic, lead and other chemicals into our groundwater forever,” said Surovell. “Landfilling is the short-term cheap solution. But long-term it has the worst potential effects because the stuff continues to leach out chemicals and give people cancer and poison fish and birds and ruin our groundwater.”

State Sen. Adam Ebbin (D-30) is also returning to a familiar theme: decriminalizing marijuana. Several states across the country have already done this, and now that California has legalized pot for recreational use many feel that the tide may be turning on this issue. According to a recent report by the Virginia State Crime Commission, law enforcement officers have arrested more than 130,000 people for possession of marijuana in the last decade — 84 percent of them first-time offenders.

“I think people are realizing how inappropriate it is to give people a criminal penalty for a drug that so many people have tried and used and is arguably less significant and harmful than alcohol,” said Ebbin. “It’s still a tough fight. But we’ve got Senate Majority Leader Tommy Norment supporting it generally. And we’ve got Govenor-elect Ralph Northam supporting it, generally.”

ON THE CAMPAIGN TRAIL last year, Republicans and Democrats both supported several key agenda items — an indication that members from both sides of the aisle may end up working together this year on certain issues. One of those is ethics reform, a hot topic in Virginia since former Republican Gov. Bob McDonnell was convicted of corruption then cleared of wrongdoing by the U.S. Supreme Court. During the campaign last year, Republican candidate for governor Ed Gillespie and Republican candidate for lieutenant governor Jill Vogel both talked about closing a loophole that allows candidates to use campaign money for personal use. That’s an issue that already has support among Democrats, although drawing a distinction between official use and personal use can be a gray area.

“I think we’ve got a consensus that we need to do something,” said Del. Marcus Simon (D-53). “Whether we make it a weak ban or a strong ban — a civil violation or a criminal act — I think we’re going to outlaw it one way or another.”

Another issue where Republicans and Democrats are in agreement is expanding broadband to rural areas. Of course the details of how to make that happen and who benefits are where lawmakers get divided, although this is one of those issues where party ideology is less important than regional ties. Last year, for example, Republicans were divided about whether to create new hurdles for local governments to set up broadband networks in places where that might create competition for private providers. This year, the issue of broadband will once again be an important topic of conversation.

“I’m looking at ways to reduce regulatory burdens,” said Del. Jennifer Boysko (D-86). “So I’m talking about including broadband in your municipal comprehensive plan, setting up a dig-once policy and creating a data governance board for smart communities.”

IT MAY SEEM like the elections never cease in Virginia, where voters go to the polls multiple times every year. And although Washington is already focused on the 2018 campaign, Richmond is already preparing for an epic election in 2019. Not only will that election include all members of the House and the Senate, it will also set the scene for who controls the redistricting process. Both parties are eager to control as much of the process as possible, and Democrats have already won a major victory by electing a governor who will have veto power over the maps drawn by lawmakers.

“The one piece of this that I’m interested in doing is having a factor of competitiveness and competition being part of the equation,” said Del. Mark Keam (D-35). “Right now all the standards that they use for redistricting are things like partisanship, demographics and minority status. But there’s nothing that talks about whether a district is competitive or not.”