Dr. Seuss's favorite characters come to life in this musical for children. 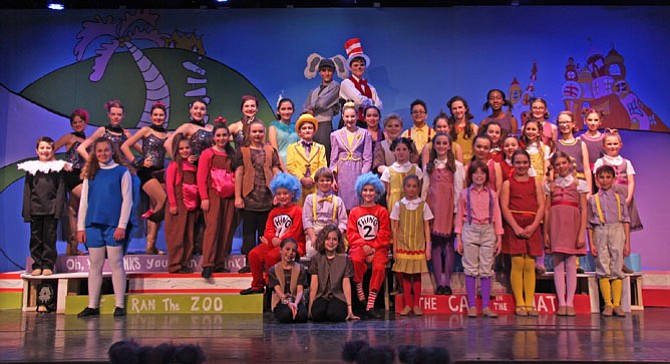 Aldersgate Church Community Theater (ACCT) in Alexandria is presenting "Seussical, Jr." from Jan. 12 to 21. Horton the Elephant, the Cat in the Hat and all of the favorite Dr. Seuss characters spring to life onstage in this musical from Tony-winners Lynn Ahrens and Stephen Flaherty.

Transporting audiences from the Jungle of Nool to the Circus McGurkus, the Cat in the Hat narrates the story of Horton the Elephant, who discovers a speck of dust containing tiny people called the Whos. Horton must protect the Whos from a world of naysayers and dangers, and he must also guard an abandoned egg that's been left in his care by the irresponsible Mayzie La Bird. Although Horton faces ridicule, danger and a trial, the intrepid Gertrude McFuzz never loses faith in him. Ultimately, the powers of friendship, loyalty, family and community are challenged and emerge triumphant.

Director Shelagh Roberts said this is the first time ACCT has staged "Seussical, Jr." so it fits well into the family-friendly nature of Aldersgate Church Community Theater. "Everyone knows the famous Dr. Seuss characters, such as Horton the Elephant, the Cat in the Hat, and Gertrude McFuzz; and everyone knows the classic books such as ‘Oh The Thinks You Can Think’ and ‘Horton Hatches the Egg,’ but many people haven’t heard the amazing score that Lynn Ahrens and Stephen Flaherty created when they envisioned a musical based on the writings of Dr. Seuss," she said.

She said the two most compelling reasons to stage it are the wonderful characters and the amazing songs from the show. "Most people know the characters and are excited to see them come to life, but the bigger surprise is just how fun, clever and moving the music is. It’s really impossible not to get excited when the entire ensemble comes out for the opening number — 'Oh The Thinks You Can Think' — or to resist being transported into the Jungle of Nool with the infectious number, 'Biggest Blame Fool,' or to keep a dry eye when our wonderful JoJo and Horton the Elephant are singing about being 'Alone in the Universe.' Every song is great, in my opinion. I love them all," she said.

She said they were trying to share this creation of Lynn Ahrens and Stephen Flaherty which tackled the ambitious challenge of trying to capture in song the spirit and genius in Dr. Seuss’s writings and put it into one narrative that audiences can enjoy.

As far as challenges, there were 33 musical tracks in the junior version, and very little dialogue. "It’s most like 'Joseph and the Amazing Technicolor Dreamcoat' in that way; it just rolls along, one song after another, and the songs represent many different musical stylings along the way," she said.

She added: "We have an extremely accomplished music director in Heather Gifford who was able to expertly teach our young actors some pretty complicated musical arrangements in a short time. Fortunately, we also have a very dedicated choreographer in Michele Koros and she really stepped up to handle much of the movement required through the course of the show."

"So our most important challenge is to present these different worlds as authentically and realistically as possible, and to convince the audience that all of these characters and environments are real and that they matter," she said.

Charlie Ruppe plays the role of Horton the Elephant. "Horton has a very strong sense of what's right and wrong, and he's not afraid to stand up for what he believes in even though the last thing he'd do would be to be rude to anyone," he said.

He said he finds a dust speck with a whole town on it and is determined to save it. "Even being tormented by the other jungle creatures because he believes there are people on a dust speck, Horton has hope because he has found friendship in a tiny 'who' named Jojo that lives on his dust speck. Horton stays true to his character throughout the show, and in the end it pays off for him. Horton ends with all of the jungle behind him and his dust speck," he said.

He said he hopes that everyone watching the show understands the parallels with the real world. "I think this show demonstrates how we should not only respect other people's lives, but also those people's ideas .... Seussical teaches its audience that ideas should be respected even if you don't believe in them, and that just because a lot of people believe in something doesn't mean it's true," he said.

Brett Medley plays the role of the Cat in the Hat. "The Cat is probably the most rambunctious role I’ve ever played. He has an energy and a style that is hard to express. He is essentially in control of the show. Everything that happens is dictated by what he says and I think that’s one of the reasons why he’s so fun to embody as a character," he said.

He added: "Personally, I think what is most important for audiences to take away from this show is the way the show is written. The show is simply a combination of Dr. Seuss's works put into a musical and that’s what makes it so interesting. There are many different themes and ideas that this show explores and I think audiences will react best to that."

Taegan Chirinos plays the role of Gertrude McFuzz, a sweet bird who only has one feather for a tail, which makes her very insecure with other birds, such as Mayzie who has tons of feathers. "She is in love with Horton and admires his big heart, but Horton never notices her because he's trying to save The Whos," she said.

She hopes people leave the theater feeling better about themselves. "Maybe you have a flaw that you don't like about yourself and it makes you feel less confident, like Gertrude and her small tail. No matter what, you should stay true to you and realize you don't need to change yourself and that you were born to be who you are. Everyone is different, we should embrace it," she said.

Zoey Caghin-Carlos plays the role of Mayzie La Bird, a party girl. "She is insecure and covers her insecurities by not thinking too much about things. She is also irresponsible and unreliable. Mayzie only wants you to have fun. At the same time, she is not mean and tries to help Gertrude to attract Horton's attention the way Mayzie knows — by 'improving' Gertrude's looks," she said.

She thinks the main message of the show is to not be afraid to be yourself, even when mean people are calling you crazy. "Even though the characters in the show are not real, the audiences will be able to recognize and relate to people in real life," she said.

Jack St. Pierre plays the role of JoJo, who likes to think a lot and has great ideas that usually get him into trouble. "It's the biggest role I have ever done. He's supposed to be a kid who gets in trouble a lot, and I find that fun to play," he said.

He added that for audience takeaways, he wants them to know "that it's great to be who you are."