Rain or Shine, the Show Must Go On
Votes

Rain or Shine, the Show Must Go On 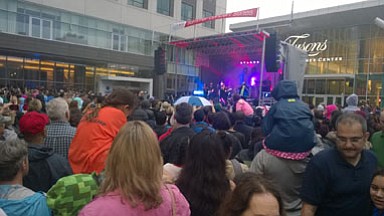 Hundreds of Mandisa fans gathered at Tysons Corner Center Friday evening to watch a music star sing in the rain. The three-time Grammy Award nominee and 2014 winner did not disappoint as concert goers danced beneath umbrellas while watching her perform through their smartphones. Photo by Marti Moore

McLean — Stormy weather could not dampen the spirits of hundreds of Mandisa fans gathered at Tysons Corner Center Friday evening to watch a music star sing in the rain.

The three-time Grammy Award nominee and 2014 winner did not disappoint as fans danced beneath umbrellas while watching her perform through their smartphones.

Rain or Shine, the Show Must Go On 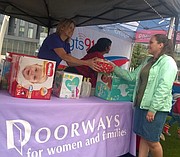 The program started with Mandisa’s 2011 song “Stronger” and ended with her title hit from the 2013 recording “Overcomer,” which earned the 2014 Grammy Award for Best Contemporary Christian Music Album.

Mandisa made her music breakthrough in 2006 as a contestant on the television talent competition “American Idol,” according to her online bios.

The show must go on rain or shine and “That Married Couple” Johnny and Stacey Stone, left and center, broadcast their afternoon radio segment live on location June 22 from 3-7 p.m. in a makeshift WGTS 91.9 studio at Tysons Corner Center from a glass nook in between the plaza entrance and the Starbucks coffeehouse. McLean resident, right, Tom Miner, is their rush-hour Beltway traffic announcer and self-proclaimed “third wheel.”

Before the concert started, WGTS radio listeners helped fill nearly five cargo vans with in-kind donations of diapers, baby wipes and Metro cards for survivors of domestic violence, sexual assault and family homelessness through Arlington charity Doorways For Women and Families — according to the non-profit organization’s fundraiser Christy Cole. Learn more about their program at doorwaysva.com.

The event kicked off the summer concert series for the WGTS “91 Days of Summer” promotion and is fourth in the mall’s outdoor performance schedule. Also, it was part of the radio station’s free ice cream tour at a new stop every week throughout the District, Maryland and Virginia.

The 2018 summer concert series is held Friday evenings from 6:30 to 8 p.m. on the plaza at Tysons Corner Center June 1 through July 27. The outdoor performance lineup:

Admission is free of charge.

Concert goers can take the Metrorail Silver Line to Tysons Corner and simply walk above Chain Bridge Road to the plaza by the VITA high-rise apartment building and the Lord & Taylor department store. Several bus lines also stop at the mall. Free parking is available in several lots at 1961 Chain Bridge Rd. in Tysons Corner. Call the mall concierge at 703-997-0950.