Nationals 12U host a friendly game against visiting Chinese team. 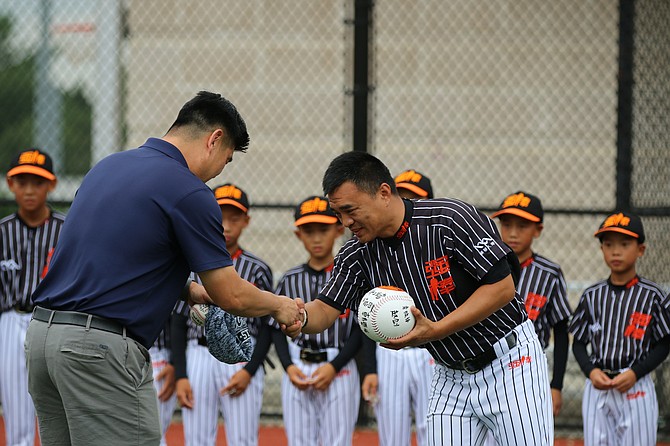 Holding Great Falls base runner Owen Peterson on base.

The graduating class of Great Falls Little League has had its fair share of baseball this summer. After finishing their final house season and competing in an exciting championship, many players went on to participate in All Stars and will now be playing their final little league tournament next week in Cooperstown.

But this past week presented a particularly special experience for the Great Falls Nationals 12U team, managed by Wilson Kim, as it hosted a friendly game against a visiting team from China, called the Powerbaseball Angels.

The Chinese team comprises orphaned and abandoned 10-12 year-old children who were brought together in a camp on the outskirts of Beijing to play baseball. The Angels are led by Lingfeng Sun, the former captain of the Chinese national baseball team, and are funded by private donations and charitable contributions.

Jay Song, Jeff Minsky and Mike Costello from Great Falls collaborated in organizing this game, which was played at the Washington Nationals Youth Baseball Academy in southeast D.C. As Great Falls recovers from continuing days of rain, the Nationals baseball organization graciously offered up their facility and turf field, which was a real treat for both teams.

For the Great Falls Nationals, this was more than a baseball game. This was a cultural experience that gave these rising seventh and eighth graders an opportunity to meet foreign counterparts on a common field. While the fundamentals are the same for both teams, the Angels brought an international flavor, which included batters bowing to the umpire as they approached home plate, batters shouting from their stance before hitting, and cheering in unison from the dugout.

Before the game, each player exchanged pins with their counterpart, while the coaches presented each other with team shirts and autographed baseballs. After six-innings of hard fought baseball, the teams lined up and shook hands, which seemed like a new and fun experience for the Chinese team. Everyone came away with the feeling that they had been part of something special.