‘Ride of the Patriots’ in Memory of Fallen
Votes

‘Ride of the Patriots’ in Memory of Fallen 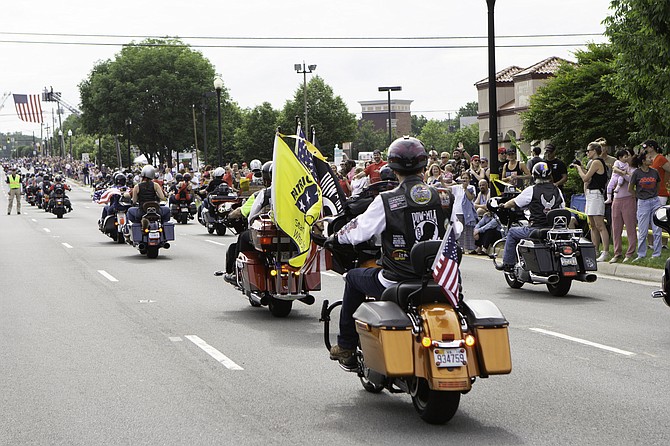 Many motorcycle riders wave flags to remember the fallen as crowds cheer them on. 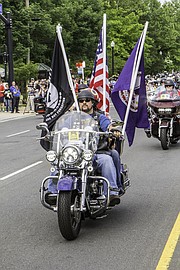 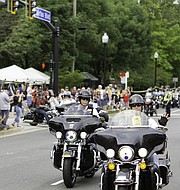 The "Ride of the Patriots" was led by two members of VA Chapter 3 of the "Rolling Thunder" —Lester Evans and Dennis Moore.

The 20th anniversary of the “Ride of the Patriots” paid tribute to American service members and veterans on Sunday, May 27. Fairfax Harley Owners Group (HOG) and Fairfax Patriot Harley Davidson hosted the “Ride of the Patriots” Memorial Day weekend ride in support of “Rolling Thunder” to raise awareness of American POW and MIA soldiers and to pay tribute to the fallen. The ride started at Patriot Harley Davidson and later joined the 31st annual “Rolling Thunder.” The line of roaring motorcycles was more than four bikes wide and a mile long. After the first bikes got to the Pentagon, the tail of the parade was still in Fairfax.

Don Withrow, Fairfax resident and former HOG Director, helped put this event together 20 years ago from an idea he worked on with Fairfax Harley Davidson and the City of Fairfax. He said Fairfax has had the biggest group joining “Rolling Thunder” and every year it grows bigger, setting attendance and spectator records.

Bob Diehl, Director of the HOG of the Fairfax Patriot Harley Davidson said on the first ride there were only 50 bikes. Today there are close to 5,000 riders from every U.S. military branch. The ride began with a send-off ceremony attended by first responders and speakers including Fairfax City Mayor David Meyer; Dr. E. Bruce Heilman, Chancellor of University of Richmond; and Nicholas John Albert Fairfax, 14th Lord Fairfax of Cameron. Dr. Heilman, a WWII Marine Corps Veteran, said that “only freedom is worth such a sacrifice.” He mentioned “this event is a message earned at great cost, reminding us why we are here and to never forget the fallen.” Riders said its their duty to ride and remember.