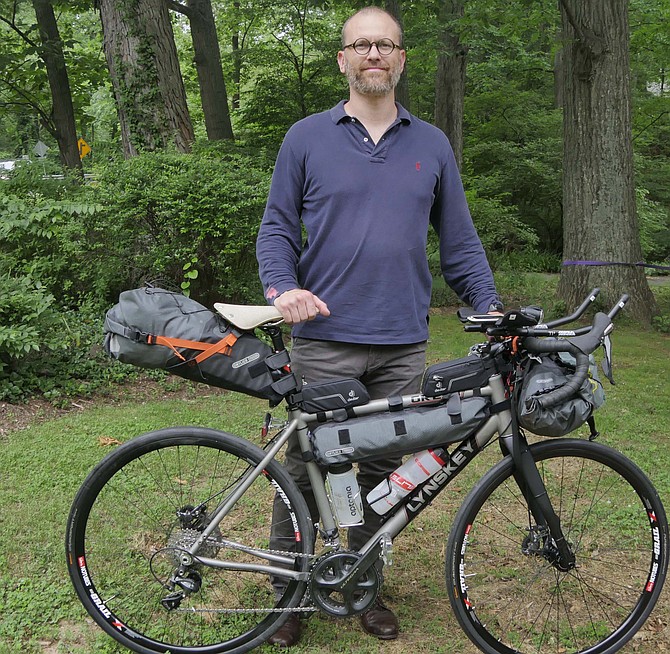 Bruno Dedet has his bike outfitted for the Trans America Bike Race which began June 2 in Astoria, Ore. Photo by Shirley Ruhe.

A map of the 4,263 mile bike race from Astoria, Ore. to Yorktown, Va. is on Dedet's wall at his home on Old Dominion Drive in Arlington. 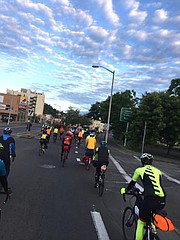 Bruno Dedet sends back a picture of riders on first day in Oregon.

Bruno Dedet records a scene along the coast. As he predicted, “I will see beautiful lands.”

Bruno Dedet has his Lynskey titanium bike all equipped and ready to board the plane to Portland for the Trans America Bike Race. The race is scheduled to begin in Astoria, Ore. on June 2 at 6 a.m.

The day has been busy with a trip to his bike store in Bethesda and the usual errands since he will be gone for 20 days — an appointment to get his dog Laos his vaccines, a trip to get the car inspected before the sticker expires this weekend. "We were going to get a ticket." And he is about to walk to Jamestown Elementary to pick up his daughter before heading back to the bike shop to get his Lynskey packed in a special box. "I have to protect the fragile parts." Tonight he will create his Facebook and web page for the trip.

He points to his front pack that contains a blow-up mattress and pillow. "I can sleep everywhere — in field, house, motel, stuff like that." He says he has to do it all on his own. "I am not supported by price (sponsors). I think it will cost $50 a day, maybe $70 without the cost of the flight or the bike."

Dedet's bike has a small pack on the back with two pairs of black bike shorts and T-shirts, socks, a toothbrush and a few small items. Everything on the bike has a function. A small tire gauge is tucked aside the pedals. Two small pouches fastened on the crossbar for easy reach will hold almonds, granola bars and other snacks while two water bottles are fastened nearby. "I'll have to stop every time I can to eat at an Exxon, or a restaurant or a house or wherever there is food." He can't pack it with him. His bike with all of the gear weighs less than 20 kilograms.

A long zippered pouch located on the side of the bike's crossbars has two leg and two arm warmers, a lightweight rain jacket and small stocking cap. Dedet says the bike also includes a device providing electricity every time he pedals, allowing him to "charge the iPhone, GPS and light so I can ride at night."

Dedet explains he is a gynecological surgeon in France, and he moved to Arlington with his wife and two children and Laos just over a year ago. He says the family came because of his wife's job as CEO of a French company. But he is unable to perform surgery in America because of the law, so he flies back to France every 2-3 weeks to continue his surgery practice there. "I used to do a lot of research, but I can't do it anymore since I'm not living in France full time." So his bike ride will raise funds for research through a French association. "This is the way I can continue research."

Dedet has been practicing for this race for the past year since he arrived in America. His practice route is often along the W&OD path to Purcellville and sometimes a loop around Arlington. He said during his training period he tried to do 80-100 miles every couple of days and has been riding every day for the last month.

"It will be epic really. I will see beautiful lands." Dedet traces his finger on the map route through Colorado where it will be high and across Kansas where it will be windy. Dedet hopes his daughter Lucie and his son Arthur will follow his progress every day. He says if anyone wants to follow along, they can access the Trans America Bike Race website and look for number 110 — all in black.