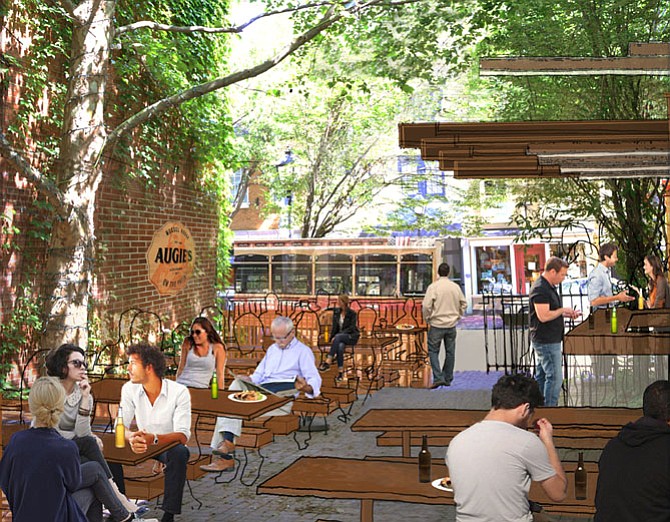 The patio pop-up at Augie’s, shown here in an artist’s rendering, is slated to open in July.

Patio lovers take heart: The long-dormant garden dining space in the heart of Old Town will be coming to life again in just a few short weeks. In July, Augie’s Belgian Mussel House and Patio will begin its residency at 1106 King St., in the building that used to house longtime French restaurant Le Gaulois, as well as other eateries over the years.

“We’re tentatively shooting for the first week in July,” said Augie’s owner Chad Sparrow. The restaurant’s opening will take place in stages: The patio will serve as a “pop-up” space this summer through early fall, with the interior dining room to open over the winter following an extensive renovation.

“We came up with concept of Augie’s because we didn’t feel there’s any type of outdoor patio (on King Street) and … the only thing that has that mussel vibe and Belgian look is Brabo, and that’s a little more upscale and not as casual,” Sparrow said.

The patio’s opening comes at an excellent time as the weather turns warmer and the days are long – and thoughts of lighter, cooler fare such as mussels and beer dance in diners’ heads.

“We really wanted to create an outdoor space with a big patio and an area where people can really gather – tons of beer selection, Belgian beer,” Sparrow said. “… And it also leaves us a good amount of creativity to do with the menu because you’re not really stuck in a corner when you doing Belgian-French cuisine.”

Indeed, Augie’s menu, even the more limited pop-up variety, will run the gamut from the advertised mussels to waffles and frites.

Taking the helm in Augie’s kitchen is Chef Eric Reid, who is moving over from Del Ray Pizza and the Reserve following a lengthy tenure there. Already Reid, Sparrow and team are working on hammering out a menu. Some of the early winners: A Buffalo-style mussel, a Thai green curry mussel and a Portuguese fennel and chorizo mussel.

But the taste tests continue. Diners can expect 10 to 15 items on the pop-up’s inaugural menu, Sparrow said.

“I think it’s going to be a nice glimpse of what’s to come – it will be drastically different from what it will be when we open full time,” Sparrow said.