Failure to Communicate in Alexandria
Votes

Failure to Communicate in Alexandria 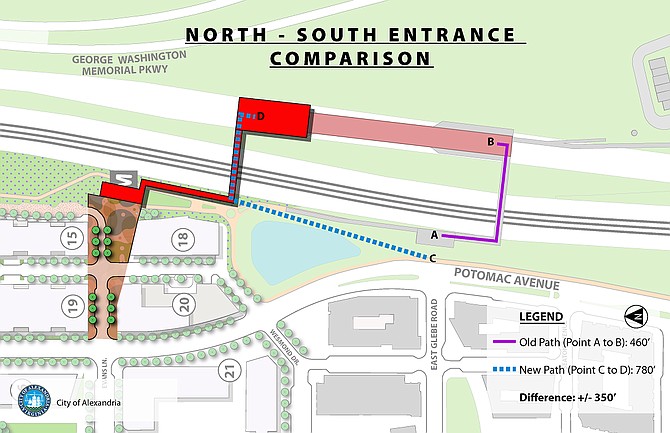 In March 2017, the bids put out by Washington Metropolitan Area Transit Authority (WMATA) significantly exceeded the project’s original $268.1 million budget. City officials say at this point the city was forced to choose between reducing the scope of the project, cancelling the bids and starting a new design, or cancelling the project altogether.

The second controversy was the silence by the city on the entrance’s elimination for nearly a year after it was first known. The outrage at this silence was compound by the revelation from a Freedom of Information Act (FOIA) request from private citizens that the silence had not been required by confidentiality agreements.

Emails show the likelihood of the southern entrance being eliminated was known at least since summer 2017. The city staff claimed that they believed confidentiality agreements forced them to keep silent, but all of that changed with one image in a powerpoint slide. On April 9, a presentation by the WMATA included images of the Potomac Yard Metro Station without a southern entrance. When city staff reached out to take the information down, WMATA Engineer John Thomas answered that the information was not considered proprietary. While the City Council had earlier been informed of the likely change, at that point city staff member Jason Kacamburas noted that even City Council had not seen the image in the file and requested that they remove the slide or replace it with an outdated image. The image was taken down, but not before it was picked up by the Washington Business Journal and from there the story spread.

“I share your disappointment and frustration that the new station will not have all the design features in the original budget and that we did not believe we were permitted to discuss the necessary design changes with the community,” said Jinks in a letter.

Jinks said the city’s belief that confidentiality was required was the result of in-person discussions and telephone calls, of which no record exists. When Thomas revealed that this was no longer necessary, Jinks said this did not represent the official determination by the agency and it wasn’t until May 1 that they received official confirmation from senior WMATA engineering and procurement officials.

“I continue to believe that all city staff acted reasonably and in good faith to pursue this vital project for the community,” said Jinks. “As soon as we became aware that WMATA had published information we believed should not have been published, we engaged in extensive dialogue to clarify the issue and publish what we could as soon as feasible.”

But much of the information about the timeline leading up to the reveal of the southern entrance’s cancellation is only available because of the costly, crowd-funded FOIA. Elena Hutchison, a Potomac Yard resident and one of the locals affected by the change who has been pressing the city with questions about the process, said it shouldn’t fall to residents to get clarity on these issues. Hutchinson said their initial FOIA was incompletely answered, and further documents were only sent once residents scouring through emails found references to items that were not included in the initial FOIA.

“Certainly the city is in a much better position to create transparency in this situation than a coalition of residents forced to crowdfund a FOIA request,” said Hutchinson. “Yet just this week, the city provided additional documents that were inexplicably omitted in our first go around only after we kept asking questions. And the city is still keeping the majority of documents under wraps until at least after the station contract is awarded. As long as we keep seeing that type of lack of transparency from the city, we'll work through whatever avenues are available to us to shed more light on a process that should rightfully have been public knowledge.”

With the southern entrance currently eliminated from the station design, residents around where the southern mezzanine was to be located will now have to walk north to then double back at the north access crossing to enter the station. City estimates put the distance at 350 feet, but Hutchinson noted that this doesn’t account for the large pond currently in the way. For that 350 feet to become a realistic distance for inhabitants of the former southern entrance, the area will require extensive landscaping or a bridge.

“We need to see the city take concrete actions toward restoring south access, not just empty rhetoric about how we are ‘all disappointed,’” said Hutchinson. “There is a very real impact to the loss of the south mezzanine in terms of walkability, ridership, future development, and ultimately tax revenues and yet the city has not released real data, maps, or economic analysis of the version of the station design included in the contract. The city could have demonstrated that south access was important to them by including some sort of access (like the bridge now proposed) as part of the revised RFP back in July of 2017, but they didn't, so it is hard to take their promises at face value now without seeing any real action taken to make meaningful south access a reality. Hopefully with the election behind them, our elected leaders can focus better on how to fix this situation.”

Frank Shafroth, director of the Center for State and Local Leadership at George Mason University, said in the absence of a stronger ethics commission the city is left with a lot of finger pointing.

“Where ethics codes work in cities, counties, and states, there is an independent board or council, so that facts can be established, hearings can be convened, and there is a quasi-judicial process to assess the integrity of a governmental process used to achieve a decision,” said Shafroth. “Absent such a process, as we find here, there is considerable finger pointing, but no trusted third party and process to assess the facts and determine whether, in fact, there were violations of a city, county, or state's ethics code.”