Off the Rails in Alexandria
Votes

Off the Rails in Alexandria 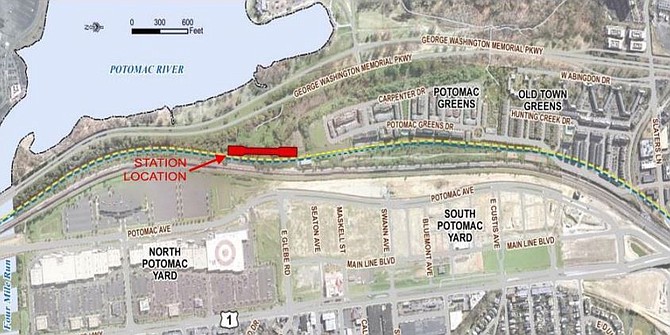 “I don’t feel that anyone on the council has our interests in mind.” — Scott Yokum, resident

If there was a recurring theme to the May 12 City Council meeting, it was broken trust. While there were advocates for and against the Meals Tax, there was no getting around the controversy of the eliminated southern entrance at Potomac Yard.

Since its inception, the Potomac Yard Metro Station had been planned to have two entrances, one in the north that would be closer to the densely packed commercial sector and one in the south closer to the residential neighborhoods. But throughout early 2018, news began to trickle out that the costs for the station were starting to balloon outside of original estimations. City estimates put the Potomac Yard project at $52 million more than originally planned. Costs of building materials and labor had increased sharply since plans began in 2015. With this came news that the project would also be pushed back to 2022.

One of the major selling points of the station was that it could be funded without tapping into city revenue, leaving limited options for managing costs. Last week City Manager Mark Jinks announced that the Metro design would need to be scaled back to fit the increased cost estimates. The southern entrance, accessible to residents of Potomac Yard, was taken off the project. At the first public hearing since the announcement, the residents of Potomac Yard said they felt betrayed by the city.

“The residents and businesses want what was proposed and promised to them,” said Mila Yochum, president of the Potomac Yard Civic Association. ”We want to be able to fully utilize the station as it was originally created and promised.”

Yochum pointed to several reasons a single entrance and exit to the facility could be a problem. The bridge crossing over the tracks will require pedestrians and cyclists to share the same confined space. Yochum also worried that equipment failures, like elevator or escalator outages, could make the whole station inaccessible.

What was more disturbing for many residents was that the staff had known about the budget problems for nearly a year but had made internal decisions about the station design without public feedback.

“This was not a decision for city staff to make,” said Yochum. “[Staff] should have included other people to consider alternative solutions.”

Jinks’ only response at the meeting was to say that he believed the situation had been handled appropriately. Mayor Allison Silberberg defended the city’s actions, saying that in dealings with the Metro the city’s hands were tied by necessary confidentiality agreements. Moving forward, Silberberg said that now that the information was public there would be more outreach and engagement with the citizens.

“There is a conversation that is ongoing here with regard to the Potomac Yard Metro Station,” said Silberberg. “We welcome the input of the community.”

But many of the Potomac Yard residents took little comfort in the city shielding itself behind the non-disclosure agreements. Yochum said the hindsight that city staff knew about the elimination of the southern entrance meant their activity in October supporting a master plan amendment that increased residential density, height variation, and two multifamily residential buildings all centered around what was to be a Metro hotspot was acted on in bad faith.

“Repeatedly, the council cited a desire to increase density based on proximity to the station, then we learned earlier this year that staff knew in July that the entrance was going to be eliminated,” said Yochum. “[There is a] lack of leadership, lack of true community engagement, lack of transparency, and an inability for city staff to act in good faith. We want a Potomac Yard Metro Station with south entrance. Find a way to lead the city through this situation ... without new and additional tax burdens. Start to restore the trust that has been lost.”

Others went further. Susan Richards, a resident of Potomac Yard, called for Jinks to offer his resignation to the City Council.

“[There is an] irrevocably broken trust,” said Richards. “Last fall, when they learned the southern entrance to the Metro station was going to be eliminated, they had a [non-disclosure agreement]. But they continued to champion increase in density. Staff sat in front of you all and testified it was within a quarter of a mile radius [of the Metro station], which they knew not to be the truth… The ax has to fall somewhere. These are not the actions of an ethical city manager.”

According to city documents, the original bids that exceeded cost estimates were received in March 2017. Until January 2018, the city was still working with WMATA to look through alternative design changes and potential procurement processes. In February 2018 the final revised bids were received, lower than the ones from March 2017 but still higher than the construction cost estimate.

For residents of the Potomac Yard, the change to the Metro station plans had upended life plans.

“My family and I moved here from Florida eight years ago,” said Dino Siervo. “We settled in Arlington, then moved into Potomac Yard in 2013. One of the big reasons was the Metro. It’s a long process and it’s taken many changes and turns. I’m here today because when I heard about the southern entrance being eliminated, I wanted you to know that the Potomac Yard Metro doesn’t rightfully belong to Potomac Yard anymore. I was willing to pay for the Metro, but now I feel it’s almost out of reach.”

Later in the meeting, the City Council voted to sunset the Tier II Potomac Yard Tax District that would have gone towards the Potomac Yard Metro Station. The sunsetting is dependent on the city receiving compensation from Dominion Energy. For the residents of Potomac Yard, it’s small compensation for the loss of the entrance.

“I don’t feel that anyone on the council has our interests in mind,” said Scott Yokum. “There’s going to be serious economic and financial impacts to the delay.”