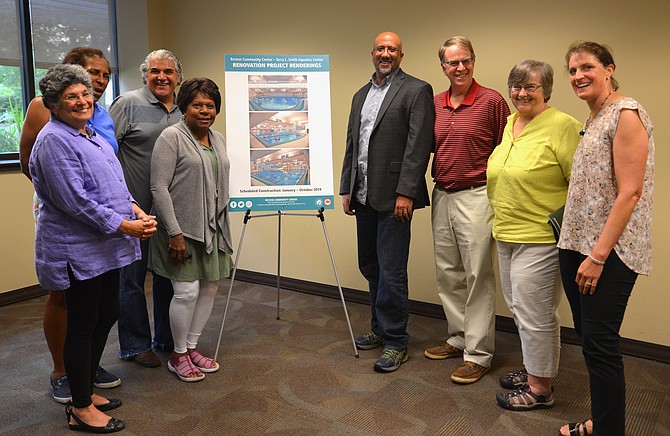 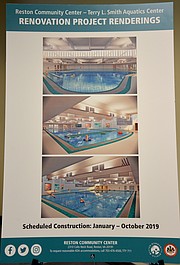 Renderings of the Aquatics area renovation at the Reston Community Center at Hunters Woods were on display at the organization’s Annual Public Meeting on June 18.

The turnout for the Reston Community Center’s (RCC) June 18 Annual Public Meeting for Programs and Budget may have been small, but that did not deter Executive Director Leila Gordon or the attending members of the Board of Governors from offering a detailed presentation of RCC’s financials, highlights from 2017, an overview of the current year’s activities and a look ahead at what’s planned for the future.

Attendees received copies of the RCC’s Strategic Plan, the evening’s presentation, and a copy of a comprehensive Annual Report. Each of the Center’s four lines of programming – Arts and Events, Aquatics, Leisure and Learning, and Facility Rentals - as well as sections on the Board of Governors and Administration were included in the Annual Report, with the information divided into the categories of “Challenges,” “Successes,” and “Looking Ahead.”

A review of the RCC’s budget and the much anticipated renovation of the aquatics venue were acknowledged by Gordon to be the topics most questioned and commented on by residents, but before steering the presentation in that direction, she outlined the highlights from the previous year.

All in all, it was a good year for the RCC and the residents they serve. Their Center Stage performances were all sold out. The Summer Concert series at Wiehle-Reston Stations was expanded, and gifts from the HeART within the Artists in Community saw their best year ever.

2018 looks to continue in that vein, with Board of Governors Chair Bev Cosham being this year’s Robert E. Simon Award recipient.

Total program participation topped 256,000, enjoying activities at both the Hunters Woods facilities and Lake Anne, and around Reston in partnership with dozens of organizations like ArtsFairfax, Osher Lifelong Learning Institute, Reston Association and the Reston Town Center Association, and NoVA Maker Faire, to name just a few of the 40 community partners and 21 sponsors who help RCC fulfil their mission to “create positive leisure, cultural and educational experiences which enhance the quality of life for all people living and working in Reston.”

In the previous year, the RCC has also moved more fully into outreach efforts with the launch of “Creative Connections” to “bring these resources to residents who may have difficulty coming to us,” said Gordon. Through this initiative, the RCC and partners bring programs directly into neighborhoods, schools, the Town Center and elsewhere in our area.

Moving to present day, Gordon and the RCC Treasurer, Gerald Zavala presented the organization’s financials, including the Capital Project projections for the aquatics center and other facilities improvement.

Audience member Bob Petrine asked several questions, both on his own behalf, and as a member of the Coalition for a Planned Reston, several of which questioned the driving factors behind the aquatic renovation. Gordon answered all of his queries, and he indicated satisfaction with the responses.

Now, about that major re-do of the pool, which will see one pool become two, designed for multiple uses.

There’s good and less-than-good news. Part of the former is that, so far, the project is holding to the forecasted timeline with a delivery date of late October 2019, after starting the undertaking in January of next year. Also to the positive, studies to date have shown no call for asbestos abatements, despite the age of the pool.

A few pre-start cost additions, including a replacement of the roof and the hot water heater, as well as negative impacts from last year’s hurricanes on the local construction scene, weigh in on the less-than-good side of the project equation.

“Also,” added Gordon, “as of yet, we can’t determine any potential negative impact from President Trump’s proposed tariffs.”

Still, the “good side” is winning. Due to years of fiscally conservative operational policies and a dedication to building “reserves” at the end of each fiscal year, Gordon and RCC Treasurer Gerald Zavala are confident that the project can be completed within the budget and finances of the organization – while preserving the “broadest possible accessibility to RCC programs and services.” Gordon and company want to “continue cost recovery” where they can, but keep fees “rational and reasonable,” maintaining their generous “waiver fees” policies and offering services like the RCC Rides, which provides transportation to older patrons.

That was particularly good news for attendee B.J. Thomas, who during the Q&A session asked about the impact of the project on the RCC’s ability to offer fee waivers to those less able to otherwise afford participation in their services.

Another check mark on the positive side is the partnership that has been forged with the Town of Herndon’s Community Center. Restonians will be able to utilize their aquatics facilities during the renovation at a very reasonable price.

THE UPCOMING RCC SUMMER PROGRAM offerings are too numerous to detail here, but music, arts, and kid-friendly activities are all represented.

The list can go on – and on! But it’s best to check out the RCC website at restoncommunitycenter.com, and review the Summer Guide 2018 publication for more information.

The Reston Community Center also urges residents to keep up and keep in touch.

“This is a collaborative effort to best serve all our residents,” said Leila Gordon. “Your thoughts are important. We’re all about building community – and you are that community.”