A Gym and Community in One
Votes

A Gym and Community in One

Local gym members support one of their own. 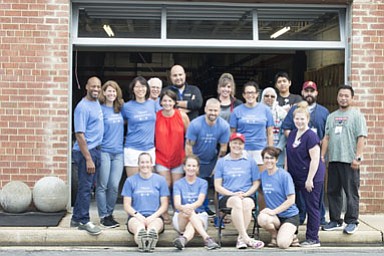 Alexandria — Seeing blue shirts with “Team Granimal” on the front, Trish Gibson knows she has support from her community — the CrossFit community.

“Granimal is mix of grandma and animal at the gym,” said Sarah Gillespie.

At Trident CrossFit, located at 410 Calvert Ave., a blood drive on June 24 was held to support Gibson who was diagnosed with urethral cancer six months ago. It’s a rare form of cancer and Gibson is already at stage 4.

Since Gibson was diagnosed, she has had five blood transfusions.

She described the processes taking five hours to get two units of blood. Gibson said she always makes sure to bring her crochet kit because she crochets to allow the time to pass by.

The blood drive was the first time the event was held at Trident since Gibson was diagnosed. This past February several members of the gym went to donate blood at another location and thought it would nice to have it at their gym.

“A group of about four of us got together and gave blood at a blood drive in Old Town Alexandria, at a basement of a church and when we left we thought we could do this at our gym,” said Gillespie.

Gillespie, who spearheaded the blood drive, worked with Inova.

Jessica Williams, a representative from Inova Health, said such drives are essential to maintain a healthy blood supply.

People coming out to support their friend Trish Gibson.

Gillespie also reached out to people at the gym as well as through social media.

“The Trident community been’s pretty amazing in supporting me during this time,” said Gibson.

Gillespie said that the Trident community is like a family. She said having an event like this is a good way for people to come together to support a member and to show they have the same heart as Gibson.

According to her friends, Gibson always makes sure to wish everyone happy birthday by organizing birthday parties and giving cards to people.

Chad Ciri has known Gibson for the last eight years and said she is the most giving person. He loves that the CrossFit community at Trident community is doing this for one of their members.

Gibson who is 62 has been going to the CrossFit for the last seven years, signing in 672 times. She said can still do CrossFit but not as much as she used to. Before she was diagnosed she would go to the 9:30 a.m. class and she would be the oldest in the class.

Her husband, Cam Gibson said he was overwhelmed once he saw what they were doing this for his wife. Cam Gibson also goes to the gym, but he participants in the 60 and over class. He said his daughter and her husband own a CrossFit gym in Colorado and that was one reason why his wife got involved with CrossFit.

Gillespie said coming to CrossFit is more like a family than working out. They are there to support each other including Gibson who said she is

“amazingly grateful for this group.”