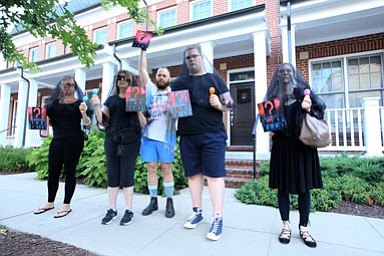 Protestors with the DC chapter of Gays Against Guns protest outside of the home of U.S. Department of Homeland Security Secretary Kirstjen Nielsen, June 26. Photo by James Cullum/Gazette Packet

Alexandria — At around 7:30 a.m. on Friday, June 22, over two dozen protestors chanted “Shame!” and “No justice, no sleep!” outside the Old Town home of Homeland Security Secretary Kirstjen Nielsen — the latest Trump Administration official to be harassed in public life.

Holding signs that read “Child Snatcher” and a banner reading, “Immigrants are #HereToStay,” the protestors shouted on megaphones and played a recording of crying children being separated from their parents after being arrested at the border. The protest was organized by the CREDO Action social change network, which has since garnered an online petition with 81,940 signatures. The group will send a letter asking for Neilsen’s resignation after 100,000 signatures.

Protestor Boyd Walker said he saw Nielsen leave for work from the back of her house.

“This is the tactic of the entire administration, to blame other people, to blame Congress, to blame the Democrats,” Walker said. “The separation of children was caused by a change in policy on May 7 to criminalize immigrants as opposed to giving them civil fines for a misdemeanor, but by changing the law, you can’t keep kids and parents together, and that’s what changed, and why 2,300 kids have been separated from their parents, and that’s just in one month.”

Also last week, on Wednesday evening, after helping President Trump draft an executive order ending family separations at the White House, Nielsen was faced by protestors while having dinner at a Mexican restaurant Washington, D.C. A video of the encounter later went viral on social media.

“How can you enjoy a Mexican dinner as you’re deporting and imprisoning tens of thousands of people who come here seeking asylum in the United States?” a protestor asked Nielsen.

The following day, Nielsen called on Congress to act on immigration reform and said the executive branch did everything it could on the issue.

“This is a very difficult and complex issue, as you know. It’s one that presidents have struggled with it for decades, it’s one that Congress has struggled with for decades,” Nielsen said at the Capitol Hill National Security Forum. “So, what he (President Trump) tried to do enables us to do that until Congress acts, and I want to be very clear on this, Congress has the responsibility and the authority to make the law of the land and to fix the immigration system.”

Then on Friday, White House Press Secretary Sarah Sanders was asked to leave by the owner of the Red Hen restaurant in Lexington, Va. There were no protests over the weekend, but on Saturday, U.S. Rep. Maxine Waters (D-CA 43rd District) drew national attention when, at a rally in Los Angeles and on television, she called on protestors to confront and harass Trump Administration officials over its zero tolerance policy at the southern border.

Trump responded by tweeting, “Congresswoman Maxine Waters, an extraordinarily low IQ person, has become, together with Nancy Pelosi, the Face of the Democrat Party. She has just called for harm to supporters, of which there are many, of the Make America Great Again movement. Be careful what you wish for Max!”

A protest outside Nielsen’s home was cancelled Monday after a lack of U.S. Secret Service vehicles indicated that she went to work early. On Tuesday, a small group of protestors with the DC chapter of Gays Against Guns gathered at around 8 p.m. and hurled obscenities at the home.

“You deserve to be tried for crimes against humanity,” protestor Aaron William said. “These human beings are fragile, and you damaged them. You broke them. You had no right to do that. Your boss sucks, too. Send him back to Russia.”

Protestor Kate Ranta said the time for civility is overdue.

“Being polite has not gotten us very far in this. It’s time to really take the gloves off and make them uncomfortable,” she said.