The Next Shooting
Votes 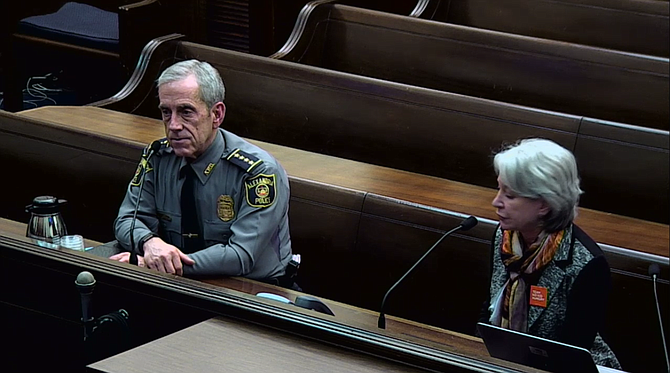 The Parkland shooting has cast a shadow across city public safety discussions nationwide. After the shooting at Stoneman Douglas High School killed 17 teachers and students, the City Council sat down at a Feb. 27 public meeting to discuss with interim Superintendent Lois Berlin and Police Chief Michael Brown how they prepare for the worst.

Berlin said the schools have recently been reassessing and retraining on school shooter scenarios.

In response to the question of whether teachers in Alexandria schools should be armed, Berlin answered she was unequivocally opposed to the idea.

“That’s their campus, so we defer to them,” Brown said. “Our officers just need to know what we have on scene. I can see the value of not having armed teachers, and that’s the school district’s call.”

The City Council also unanimously voted in favor of a resolution urging Congress and the Virginia General Assembly to pass gun reform legislation, notably urging for stronger background checks and a ban on assault weapons. Vice Mayor Justin Wilson noted, however, that everything in the resolution was reiterating things the City Council has already been urging for years. Virginia is a Dillon Rule state, meaning that localities have limited power to legislate on issues like gun control, but Wilson said there were still efforts the city could undertake. Wilson proposed looking into enhancing city efforts to remove illegal guns from the streets and to encourage local business owners to ban guns from their private property.

“It seems to me, this is a moment not for more words, but a better moment for action,” said Wilson. “Happy to support this resolution, but I would hope we could take a look at options we have for doing some things. I think a lot of the things in this resolution are things that have to go through Washington or Richmond. I doubt Congress waiting to hear what Alexandria has to say on these issues. But there are things we can do given what authority we do have that I hope we’ll explore. There are possible ways to accelerate efforts to get illegal guns off the street, maybe a conversation for our upcoming budget process.”