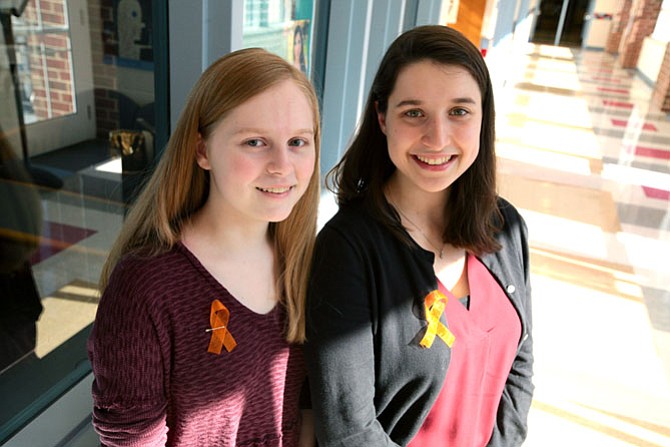 T.C. Williams High School students Hannah Miller (left) and Jay Falk organized a day against gun violence on Tuesday. Their #WeAreAllEagles event was adopted by the school, prompting over 1,000 T.C. students to wear ribbons and the school colors of Marjory Stoneman Douglas High School in Parkland, Fla., which suffered 17 deaths from a shooting on Feb. 14. Photo by James Cullum/Gazette Packet

T.C. Williams High School senior Jay Falk had to do something. She was watching the news in the aftermath of the Feb. 14 shooting that left 17 teachers and students dead at Marjory Stoneman-Douglas High School in Parkland, Fla., and called up her friend, junior Hannah Miller. Their #WeAreAllEagles day against gun violence on Tuesday, Feb. 27 was quickly picked up by over a dozen area high and middle schools, and thousands of students wore orange ribbons and the Stoneman-Douglas school colors — maroon, black and gold.

"I was really emotional about it," said Falk, 18. "Hannah and I talked about it and the next day we asked one of the leadership teachers to organize a day of solidarity with the students."

"We started creating posters, fliers and promotional material and got the word out on social media," Miller, 17, said. "And then we started reaching out to anyone we knew in other high schools in the area, like anyone Jay and I knew from any other high school in the DMV area."

"It's no surprise to me that Jay and Hannah and other students knocked it out of the park," Balas said. "Of course I'm proud of them. I think that they have found a real way to try to raise awareness."

"This is going to be an ongoing project for us," Castle said. "We want it be for more than just this one day."

State Sen. Adam Ebbin (D-30) also wrote TC students a letter urging them to participate in the "March For Our Lives" at the National Mall on March 24, and delivered a video message, which was broadcast during the Tuesday morning announcements.

"You don't have to be a voter yet to shape the debate," Ebbin wrote students from Senate of Virginia letterhead. "Show up to #MarchForOurLives on March 24th. Speak up by writing or calling your elected officials. Engage our community by penning a letter to the editor. Get involved at election time. Register to vote as soon as you are eligible. Vote. Repeat until no school in America has to wonder, 'Who's next?'"