A Back To School Rally in Alexandria Against Gun Violence
Votes

A Back To School Rally in Alexandria Against Gun Violence 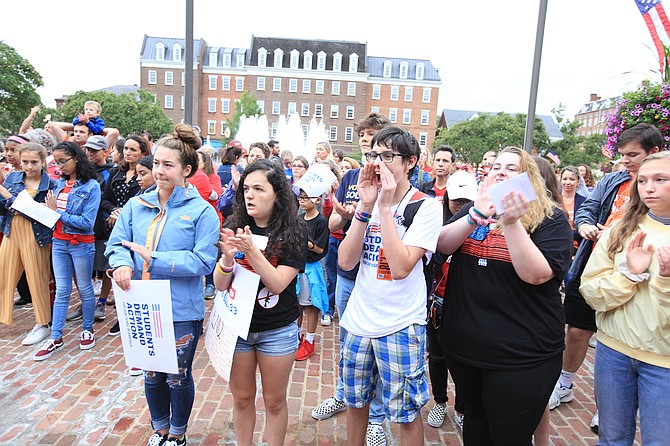 The Back To School Rally Against Gun Violence was attended by students, parents and local politicians at Market Square, Saturday, Sept. 8, 2018. Photo by James Cullum/Gazette Packet

Less than six months ago, Alexandria fifth grader Naomi Wadler spoke to an audience of millions around the world at the main stage of the March For Our Lives demonstration against gun violence in Washington, D.C. On Saturday, Sept. 8, Wadler once again took the stage, this time at Alexandria’s Market Square with students from around the region to demand gun reform action.

Jaxon O’Mara, a senior at Great Mills High School in Great Mills, Md., also encouraged the audience to go to the polls. On March 20, a 17-year-old student walked into the school and shot and killed one student and injured another before killing himself.

“For me… school is now the place where my classmate was shot and killed,” O’Mara said. “It is time to act, it is time to change and, frankly, it's time to vote.”

The Back To School Rally Against Gun Violence was organized by T.C. Williams High School senior Hannah Miller and George Washington Middle School seventh grader Miranda Tonsetic, both members of Students Demand Action NOVA. Miller, a student activist who has protested at a number of gun violence prevention events, also helped organize a school walkout at T.C. Williams High School in the aftermath of the Feb. 14 shooting at Marjory Stoneman-Douglas High School in Parkland, Fla. that killed 17 students and teachers.

“I have at least 10 more years at school and I’m at risk every day in my classroom,” Tonsetic said.

“We need your help,” Miller told the crowd. “To all students — create clubs, inform yourself, inform your friends, keep on showing up to events like this to show that you will not stand up to gun violence any more. To the adults — register to vote and then vote. And to our politicians who are not listening — we will not stop until you do.”

Wilson said, "The students behind this movement refuse to allow their efforts to be fleeting. They know that success will not be overnight. They are working to build a campaign that is sustainable and achieves real change. I would never bet against them."

“Win for all your classmates who don’t feel safe. I’m confident in your victory,” Ebbin told the student protestors. “You will continue to face long days of canvassing and protesting, the heat, the cold, and the rain… And there will be adults and even elected officials who will dismiss your knowledge and dismiss your experience. You will face hostile resistance from the corporate gun lobby, who trade profits for lives. Here's how to win this fight, though. You register voters, vote, protest, keep moving forward. Together we will take back state legislatures and governorships from the NRA, we will take back the U.S. House, we will take back the Senate and in two years will take back the White House.”