March For Our Lives Shows Determination 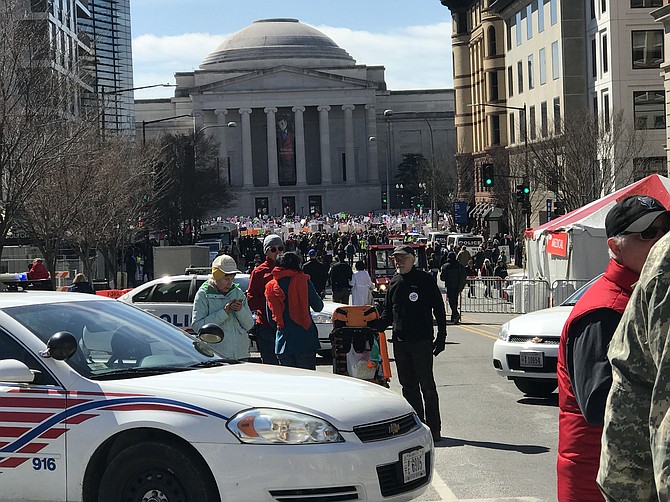 The streets of D.C. were filled with marchers on Saturday. 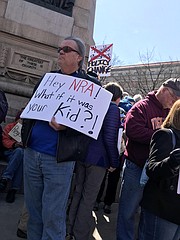 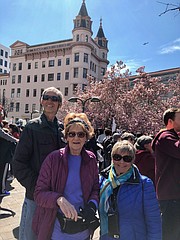 John Styer, Nancy Styer and Susan Belford at the march.

There was also a March at Maplewood in Bethesda. These seniors supported the rally.

“No more guns!” “Vote them out!” “Enough!” “Never Again!” chanted the crowds, led by students who had been personally touched by the devastation of gun violence. As more than half-a-million people cheered and wept with them, these teens delivered this message: “We will not give up and we will bring about change. We will vote out legislators controlled by the NRA, we will fight for gun reform laws and we will never forget.”

The youth came to Washington D.C. on Saturday, March 24, to express their rage and need for change. They spoke with passion and determination, focusing on thoughtful solutions to gun violence — changes they want to be immediately addressed by Congress. The teens delivered first-hand stories of bloodshed and heartbreak, tales of lost siblings, friends and classmates.

The students from Marjory Stoneman Douglas High School organized a rally of hundreds of thousands of people in Washington D.C. They encouraged their peers to register to vote in the 2018 mid-term elections and to work to bring about an adjustment in the attitudes of legislators. Their message was one of hope that stricter gun-control laws can end the two decades of shootings which have taken place across the US — in schools, concerts, movie theatres and on the streets. They are seeking to unseat elected officials who receive campaign contributions from the NRA. They want an end to student nightmares of a shooting taking place while she or he is in class. They do not want to arm teachers; instead they want a safe environment in which to learn and safety on the streets as students travel back and forth to school.

In New York City, Meghan Bonner, a Marjory Stoneman Douglas High School student, said “The adults failed us, and now 17 people are dead.” These students are taking the matter into their own hands – and encouraging common sense gun laws. “We are not looking for band-aid solutions,” said one teen.

Eleven-year-old Naomi Wadler of Alexandria, Va., addressed the crowd: “We know we have seven short years until we too have the right to vote,” she said of her peers. “So I am here today to honor the words of Toni Morrison: ‘If there is a book that you want to read but it hasn’t been written yet you must be the one to write it.’”

David Hogg, survivor of the Marjory Stoneman Douglas High School shooting, made it clear that politicians in the pocket of the National Rifle Association wouldn’t be around much longer. “To those politicians supported by the NRA and who allow the continued slaughter of our children and our future, I say: Get your resumes ready,” Hogg said.

Adults who attended the March for Our Lives were in awe of the students who possessed the composure to stand before more than 500,000 people to share their feelings and message: “We won’t sit down and be quiet and wait our turn. Now is the time to create change. Welcome to the revolution.”

Bethesda’s Polly Bomstein was grateful that she could attend this history-making day. She said, “The March for Our Lives rally reinforced my belief that anyone, young or old can make a difference. To see thousands and thousands of people completely captivated by the strong messages of Gen Z was empowering.”

Sarah Cato from Potomac who attended with her husband Philip, said, “My husband and I were honored to be able to attend the March For Our Lives in Washington. It was simply awe inspiring. This movement started by these bright, articulate, compassionate, passionate and grieving young people could lead the way to a more safe and sane future for us all — if only we adults can join them with support and a dose of their caring.”

Nancy Styer traveled from Rockville to the rally and found herself in an amazingly polite and respectful crowd. She watched and listened to poignant, well-articulated speeches on the Jumbotron and said, “I ran a gambit of emotions during the march from grief to anger to hope. The standout was those young people who spoke — they were brilliant!”

She was accompanied by sister-in-law, former Montgomery County Public Schools counselor Ginny Styer who said, “We witnessed this new generation channel their trauma and grief into outraged passion for an end to gun violence — an end to the murders of our children in schools and cities — now. We absorbed some of their pain — and it’s now up to us to act, revitalizing our own activism from half-a-century ago. What will I do to be a part of this change now?”