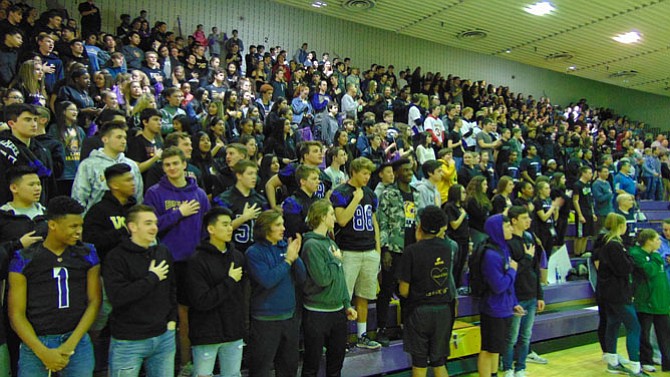 The fans filled out the bleachers for the FanQuest at Lake Braddock Secondary School. Photo by Steve Hibbard. 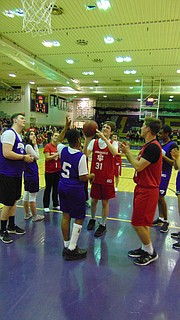 Annandale High students challenged Lake Braddock Secondary School to a game of basketball during the FanQuest on Friday, March 9, 2018. 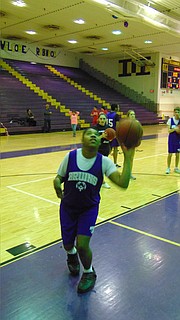 Christian Coghill, 16, of Lake Braddock does a layup.

The bleachers at Lake Braddock Secondary were packed with cheering fans for the first-annual FanQuest basketball game on Friday, March 9, between Lake Braddock, Robinson, and Annandale High Schools. FanQuest is a Special Olympics event where 57 special needs students from three schools played basketball with help from the gen-ed students in front of a crowd of about 1,000 people.

“Special Olympics is a growing organization here in the County and so we want to showcase our students and give them the opportunity to play just like every other athlete,” said Heather Finch, Special Ed teacher and coach at Lake Braddock. “It’s getting the community involved, letting them know that there’s a lot of people here who care about our students with disabilities.”

“FanQuest is a wonderful opportunity for our Special Olympians from various schools in the region to get together and play a basketball game in a high school court with a group of fans to watch,” said John Banbury, Principal of Lake Braddock. “I’ve covered this event many times in various other schools and it’s really a remarkable event. You can hear the crowd behind me how excited everybody is to watch them play and I’m excited that this is our very first time and I hope this continues for years to come.”

“We’re excited to have FanQuest here at Lake Braddock Secondary School to promote inclusion and opportunity for whole school engagement with our unified champion schools in Northern Virginia,” said Veronica Jennings, Potomac Region Director with Special Olympics Virginia. “So, this evening is about whole school engagement and to show the community the benefits of unified sports that are going on here between all the schools from Robinson and Annandale High Schools.”

The special-ed students were partnered with general-ed students who attend practices and who assisted them in playing the game. The opening ceremony included cheerleaders from Special Olympics Area 26 performing. For half-time, there were performances from the Jump Roping Lions and dance teams. In the hallway, there was a Tailgate Party set up with booths from clubs and organizations. The emcees were two administrators: Tony DiBari and Bret Garner.

The event was put together with the support of Special Olympics of Virginia, the Lake Braddock PTSA and Student Government, Peer Helping Club, DECA, Athletic Boosters, and members of the football and baseball teams. “This is our first year. We hope to make this an annual event and continue it next year,” said Finch.