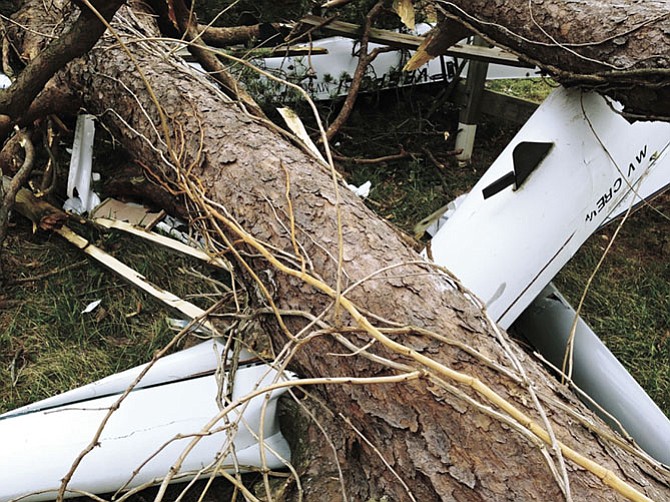 The fierce wind storm that swept the region on March 2, knocking down trees and disrupting power to thousands of customers over the weekend, took its toll on a local crew team before moving out. The Mount Vernon High School rowing team lost four racing shells to falling trees during the gale.

Two of the damaged boats, the Alpha and the Bravo, had been purchased recently and had not yet been officially named. Also destroyed were the Rocky, named after a former coach, and the Commander, donated to the team by the Mt. Vernon Yacht Club. While the Majors purchase their equipment used, new shells can cost as much as $30,000 new. The team carries insurance, but the replacement cost exceeds the value of the lost equipment.

The Mount Vernon program, which is not supported by Mount Vernon High School or Fairfax County, will have to raise money for repairs and replacement. According to the team treasurer, the gap between the insurance coverage and the cost of acquiring new (used) equipment will run as high as $15,000.

Community support has played a significant role in the growth and success of the Mount Vernon crew team, which is entering its 16th season of competition. The team raises money for operating expenses through rower fees and fundraisers, including bake sales, car washes, and Bingo. Many community members may have seen the rowers going door-to-door on a soggy Saturday in February during the annual Tag Day fundraiser when the team asks their friends and neighbors for support. “The rowers were trudging through the rain all day to raise money to pay competition fees,” said the team treasurer. “Now we are going to have to find new ways to raise money” to pay for the damaged shells.

Many generous supporters of the team have already stepped forward with offers of assistance. According to head coach Jamie Kirk, the team is particularly grateful to have received donations from other rowing teams in the area. “The camaraderie of the rowing community and specifically of our teams here in Northern Virginia has been fantastic,” said Kirk. “The funding, offers of using boats, and the words of encouragement point to the strong kinship and cooperation of our sport.”

The team rows out of Ft. Belvoir Marina and stores its boats there during the rowing season. Nearly half the team members are military dependents. The booster club is a certified 501(c)3 charitable organization.

The team is also looking for an additional assistant coach. Contact president@mvcrew.com for more information.