Adult rowing options for all ages and abilities. 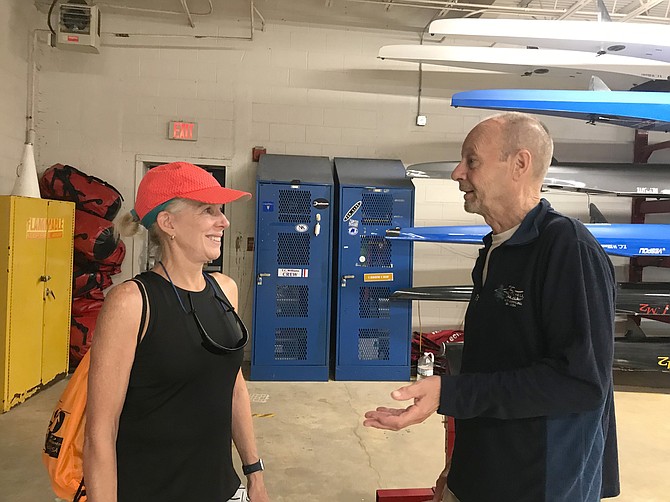 Long before the sun has crested over the Potomac on any given August morning, a cohort of unlikely rowers converges on the Dee Campbell Rowing Center at the river’s edge in Old Town, among them a massage therapist, a lawyer, a local business owner, a military reservist and a retired kindergarten teacher. All are members of Alexandria Community Rowing, which marks its 30-year anniversary this season.

Each lineup of rowers readies their oars on the dock, then pulls their boat from the racks and emerges from the boathouse dock side. By 5:15 a.m., the national competitive team is in the water heading north as are two sculling doubles — boats of two where each person rows with two smaller oars versus a single larger oar or sweep. The local competitive team follows, just shy of two full boats of eight by one rower. A coxswain is nestled knees-up at the rear of each long shell, steering and echoing calls from the coach to the rowers. The coaches motor along nearby in pontoon boats, reading and responding to the wind and water and running drills when able.

“Alright, rowers. Grab some water. Long pieces. We’re getting ready for racing,” shouts Coach Jake Kennington, a graduate student at the George Washington University. “Some mornings, the water is like a sheet of glass — with the occasional rolling waves left in the wake of large boats. On a morning like this, where the water is choppy, it’s harder to run drills and teach refinement.”

Kennington came to rowing during his undergraduate years at High Point University in North Carolina. With the lengthy limbs on his 6’ 3” frame, he was told he had the build of a rower and was urged to join the school’s crew team. He did. Five years later, he’s coaching rowers of all ages and abilities through Alexandria Community Rowing (ACR). “It’s the best part-time job because I’m done by 7 a.m.,” he says.

ARC was born out of the curiosity of parents of T.C. Williams High School rowers, who peppered coaches with questions about why their kids loved to row so much. A coach challenged the parents to show up at 6:30 a.m. everyday that summer to find out why. They did — and, they finally understood. That was more than 30 years ago.

From there grew a relationship between the high school rowing program, with its new boathouse built in the late-’80s, and the adult rowing program, which used the boathouse and supported the high school program through Alexandria Crew Boosters. Initially ACR directed rental fees for single sculls to the boosters club. Over time, it evolved to contribute a portion of each ACR member’s dues to the boosters club.

Today ACR has 350 members and offers year-round programming to Alexandria rowers and those from neighboring communities. Rowers include students who rowed back in high school, college students who want to row over summer break, consultants and business owners who go from boats to business suits and retirees who want to be on the water. They range in age from their 20s to their 70s.

Social Chairperson Elenor Richards says, “There’s a place for everyone.” She aims to help dispel the idea that rowing is an elite sport for young people.

A novice rower when she joined ACR eight years ago, Richards has served as the social chairperson for the past four. She’s worked her way up into a local competitive boat that races against other local clubs including the Capitol Rowing Club, Rock Creek Rowing and the Prince William Rowing Club. While all competitive teams race in regattas in places like Occoquan, Philadelphia and Boston, the national team competes throughout the country. Last weekend, the national team brought home two gold medals from the Masters National Championship in Grand Rapids, Michigan.

But, not every rower has to compete. In addition to the local and national competitive teams, which compete eight and 14 times a season respectively, ACR runs recreational novice programs in the spring and summer for those new to the sport and offers options for sculling as well. In all, ACR offers 10 programs and hosts a “learn-to-row day” each spring. It runs year round with co-ed boats on the water from April to November. Over the winter, rowers work on conditioning in the upper decks of the boathouse.

Membership dues vary based on the program selected and scholarships are available. The dues cover coach salaries, facilities usage fees and contributions to the boosters club.

Joanne Goodwin was also new to rowing when she joined ACR. She remembers watching the boat races on the Charles River in Boston for 20 years and finally decided to give it a go here with ACR. Today, Goodwin says she doesn’t know what she would do if she didn’t row four or five days a week. ”I get such a sense of accomplishment and learning,” said Goodwin, “and I’ve met so many people with interesting backgrounds.”

“With a group of adults who vary so widely in fitness, ability and age, one challenge is putting together a team that works. But when it works, things tend to gel,” he says.

On the boats, rowers face the backs of their fellow rowers. Much of the connection between these rowers happens as they learn to synchronize their strokes and rhythmically plow through the water at an even pace. The rest happens at happy hours, celebrations and while cleaning up the boathouse at the end of the season.

Alice Reid has been with ACR from the start — her sons rowed at T.C. Williams. She’s developed some close friendships with her fellow rowers over the past three decades and has also seen a lot of change. “The club is much bigger, of course. And, it’s become much more competitive over the years. Fortunately, it’s attracted more young people who have a fierce drive to win. Yet some of us who started the club as middle-aged T.C. parents have still managed to keep our oars in as we’ve aged. That’s been interesting and fun,” she says.

By 6:30 a.m., the boats are heading back to the boathouse. The pink and violet hues melt away as the sun continues its ascent. A family of geese makes its way across the river while an osprey balances atop a piling at the dock clenching in its talons the breakfast it just plucked from the river.

The rowers ease their boats dockside. Puddles form around their feet on the dock as they disembark. In lockstep, they hoist their boats atop their shoulders, then high above their heads to drain the water before heading in. In the boathouse, they slide the boats back onto the racks and collect the oars from the puddles on the dock.

By 6:45 a.m., once boats and oars are stowed, the rowers have scattered. A coach races off to get ready for a second job downtown. A DC. government worker squeezes in a round of weights before getting ready to head to the office. And, a nurse heads off to get ready for her day at a free clinic in Arlington just as Old Town comes to life.

Learn more about Alexandria Community Rowing and the history of the program at www.rowalexandria.com.