People At Work: Connecting Language Needs with Interpreters in Alexandria 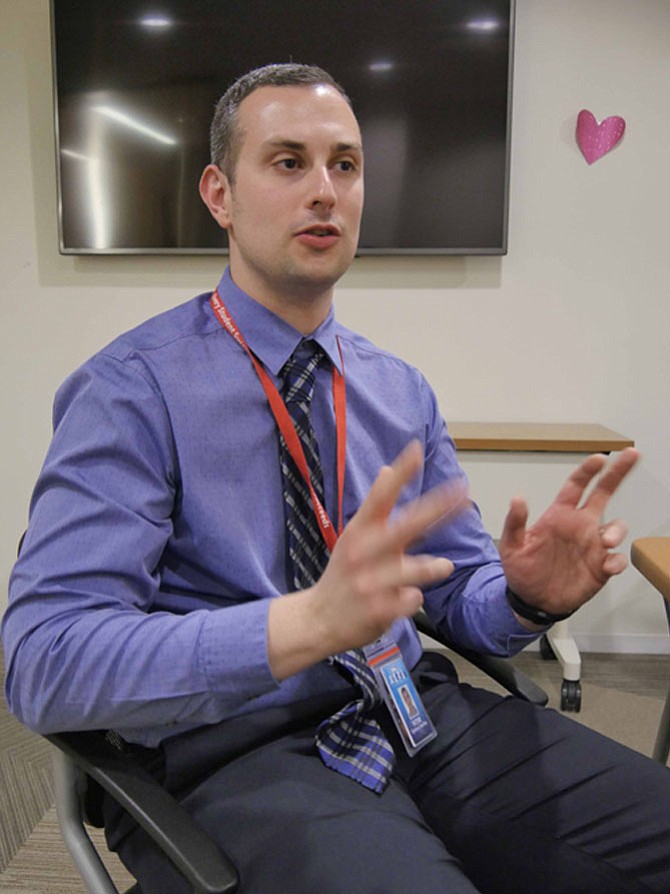 Victor Espinosa opens up the 35 e-mails that he averages every day requesting translators. They have arrived from the Alexandria Public School System (ACPS) overnight. Espinosa is the language access coordinator for ACPS. He says he tries to empty his in-box every day.

Today there is a request for three interpreters at a community meeting providing an update on school construction. "It is a diverse population, so they have requested interpreters in Spanish, Amharic and Arabic." Each person who needs translation will receive earphones and can, for instance, dial Channel 1 for Spanish or Channel 3 for Arabic to receive simultaneous translation.

"It really increases participation in the meeting."

Espinosa gets many different requests from families who may need an interpreter for an IEP meeting for their child, or a parent-teacher conference. Sometimes there is a challenge such as a part of Ethiopia with a different dialect. He knows what is on the school calendar and upcoming events, "but there is always that surprise."

Espinosa remembers when he started three years ago that a lot of the requests were for Spanish. Then one day he got a request for a Creole interpreter. "Oh, no, that's tough." He had to check different vendors and finally found someone. So the next year he made sure they had a creole interpreter available. "Now we have five."

He says he has to be flexible. Sometimes there is a last-minute request and the family can only be available on Tuesday at 10 a.m. "Situations arise and we have to be able to find an interpreter." And, he continues, the way an individual takes in information is different. Sometimes the family has no computer and only uses the phone. Other times a video is more effective, or they can gravitate toward social media. In addition, some people relate better to an interpreter who is more comfortable for them. It's whatever works best to facilitate communication.

In addition, Espinosa coordinates written translation which he now has performed in-house rather than using outside vendors. "They are inside the system and understand the school divisions. It is working really well because it’s not abstract. They understand how the school system works." The informational packets sent home at the beginning of of the school year are printed in English, Spanish, Amharic and Arabic.

Espinosa came from Spain where he had worked in a small company on 16th century Spanish philosophy and literature books. Then he practiced with Americans who wanted to learn Spanish. One American he started dating "and now she is my wife." She went back to America and they dated long distance "but then I decided to leave my comfort zone and go to America for one year."

He remembers it was tough living in this country. "I would go to the grocery store and ask for something. They didn't understand because of my accent, but I thought I was being perfectly plain." Then there was the driving. He had never driven before because they have better options for public transit in Spain. "Also the way of living in Europe is different, more spontaneous."

"I came here on a Friday and on Monday I was teaching Spanish, then assistant editor in the Hispanic Division at the Library of Congress." Finally one day he phoned "for this job and it is interesting to me because I can do something that counts for others. I feel close to them, and I'm doing something good for someone."