Students, Commuters, And Sewage, Oh My, in Alexandria
Votes

Students, Commuters, And Sewage, Oh My, in Alexandria 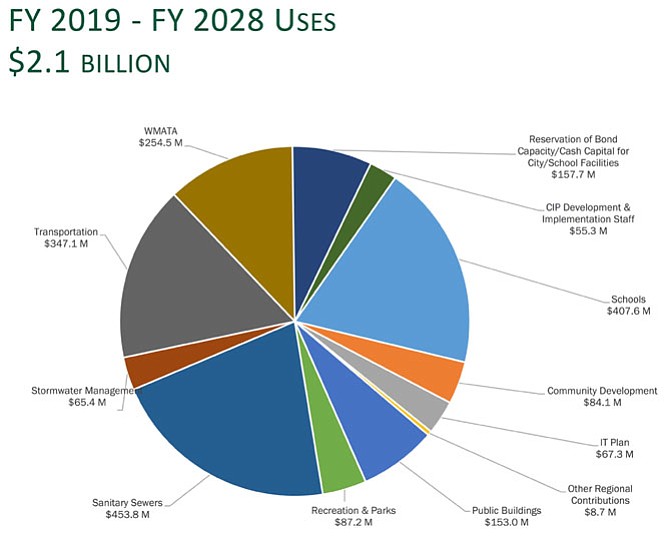 City Council waded into the FY19-28 Capital Improvement Program (CIP) at a March 7 work session, though certain key components may yet be impacted by unfolding state budget decisions.

Jinks funded 100 percent of the schools’ capital request — $68 million in FY19, $475 million total. After years of contention, the Ad Hoc Joint City-Schools Facility Investment Task Force recommended a budget compromise to both bodies in December, mediating this year’s ceasefire, which has held so far.

The task force recommended spreading project funds over many years, especially design and planning “seed money” in the earliest stages. This year’s proposal includes $5 million for planning a new high school capacity project, which, in total, will ultimately cost an estimated $118 million.

Regarding the conditions on which the city release these planning funds to the School Board, Vice Mayor Justin Wilson said: “This is kind of the first good test of our ‘jointness.’ This is a big project, it’s huge. And it has a lot of implications. … I’d be looking at that process as a model for what we do in the future.”

Similarly, Wilson pressed for a more detailed plan for the renovation of city hall. This project will cost $500,000 in FY19 for planning and $41 million overall, including repairs to Market Square and the parking garage underneath it.

“[If] the School Board came to us and said, ‘We want $41 million to build a building,’ we’re going to send them through the paces on what they’re doing, and what alternatives they’re considering, and all of that,” said Wilson. “We should have a reasonable conversation about the best way to use [city hall].”

“We have departments in here, [for which] the space just does not function,” said Councilman Paul Smedberg. “They should be in a governmental center somewhere off-site that’s accessible, where a majority of our residents live and we can have modern facilities. … Someplace in the West End that’s near transit and one of the new [transit] corridors and a Metro station.” Several council members, except Mayor Allison Silberberg, expressed varying degrees of agreement.

Last year, the state mandated an accelerated overhaul of Old Town’s sewer system, which shunts raw sewage into the Potomac when it rains. Jinks proposes $30 million for the project in FY19, ramping up every year to over $100 million in FY22 and FY23, and then tapering off. The total over 10 years comes to nearly half-a-billion dollars.

Jinks’ proposal assumes the state would kick in for 20 percent ($77 million), including $20 million that former Gov. Terry McAuliffe proposed for FY19-20.

On Monday, neither state Sen. Adam Ebbin (D-30) nor Del. Mark Levine (D-45) expressed confidence that the state’s budget, when finalized, will include the proposed FY19-20 funds. Both said they’ll continue to press for funding in subsequent budgets.

Craig Fifer, a city spokesman, said in an email: “We are hopeful that the state will contribute to our CSO remediation as they have in Richmond and Lynchburg, but we know this may take several legislative cycles to work out. … State funding will still be important and useful next year if it doesn’t come through this year. There’s nothing to figure out about how to replace any state funding that doesn’t come through, since local sewer fees can pay for the entire project eventually. We just don’t believe that’s fair to our community …”

Council also discussed expanding bus rapid transit (BRT) in the West End, as part of a plan that intends eventually to connect Landmark and the Pentagon.

“Because they basically don’t have good transit connections,” West End office buildings are “empty,” said Jinks. “If we want Landmark to succeed, and we want the commercial parts of the West End to do better, our future is really based on BRT being successful.”

The necessary $133 million would come largely from federal and state sources, including state monies distributed through the Northern Virginia Transportation Authority (NVTA). Competitive NVTA funds, banked on but not yet won, would finance nearly half the project.

Alexandria’s “projects have scored very well, and are definitely, I think, on the list that’s going to make the cut,” said Smedberg. “We would probably lose that money if we chose to pull this. … Believe me, there’s $4-5 billion worth of projects that NVTA can fund in a nanosecond.” Some West End residents have expressed concern about removing certain trees to make room for BRT.

“We are still evaluating the impact of the state WMATA contribution on our budget plans,” said Fifer.

Jinks’ CIP would utilize cash and bonds, split 50/50 on average. Debt ratios are projected to remain within council-set limits. In fact, one staffer told council, “We’re retiring debt faster than we’re taking it on.”

“Why do we not put the affordable housing development monies in the CIP?” asked Wilson. He requested a memo on the subject, “particularly as it relates to the conversation around dedicated funding. I think it potentially provides a path to weave our way through some thorny issues.”