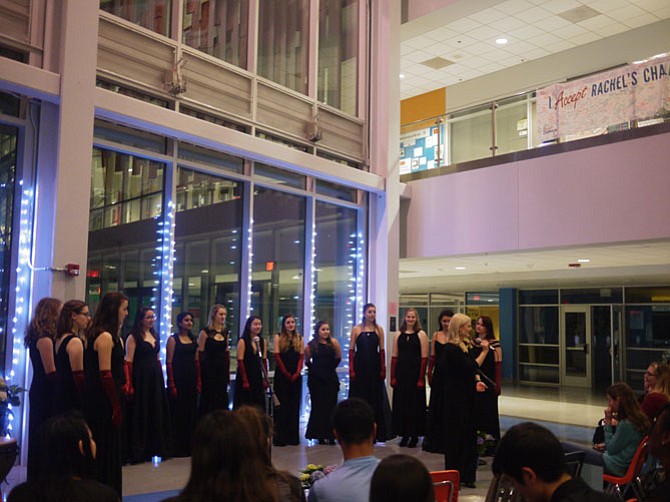 Something Extra performs in the atrium of Yorktown High School, providing a Q and A session with Yorktown’s Chamber Choir afterwards. Yorktown’s long-term substitute for the choir program, Kyra Klontz, is in the foreground. Photo by Eden Brown.

The Yale a cappella group, “Something Extra,” and the YHS singers, performed at Yorktown High School on March 13.

The Yale group told the story of how they got started. When Yale’s a cappella groups were only male, there were several all-men groups but no female singers. Every year, the male groups came together for a competition on campus, and that year, as the concert was ending, the master of ceremonies noticed a group of women in black tie preparing to come up to the stage. “Oh,” he said, “it looks as though we have a little ‘something extra’ that wasn’t on the program.”

Yorktown’s Chamber Choir also performed, and this was the debut performance for Yorktown’s new smaller a capella group, which practices after school.

The YHS Chamber Choir had a busy week: on March 17, they attended the regional District XII Choral Assessment held in Chantilly, Va. They, and their interim director Kyra Klontz, who has worked with the group since January, received a score of excellent overall, and a superior in sight-reading. Judges noted the pieces they performed were of extreme difficulty, rhythmically complex, and vocally demanding.