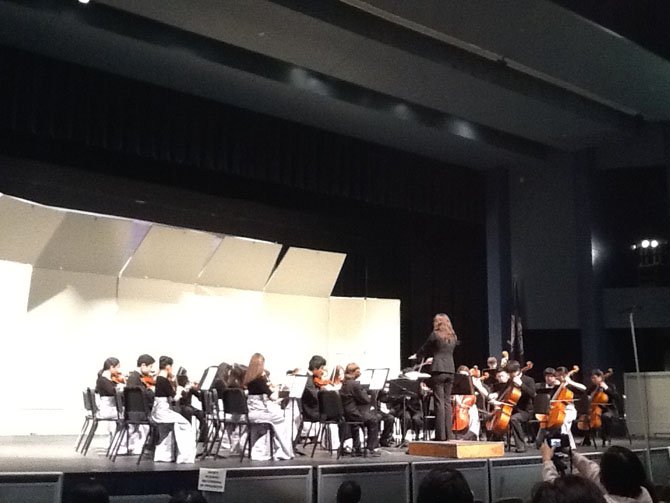 The Cooper Middle School Symphonic Orchestra received a Superior (highest) rating at the District XII Elementary and Middle School Orchestra Assessment on March 10. Conducted by Bo-Min Son, the orchestra performed a Chorale by Bach, Hungarian Dance No. 5 by Brahms, and Dorian Dance by Phillips. Soloists in Dorian Dance were eighth graders Alex Lim on cello, Kevin Le on viola, and Kevin Pulley on double bass.

The thirty-six members of the orchestra worked with Orchestra Director Erin Maguire and substitute teacher Bo-Min Son for three months in preparation for the assessment.

Each year, the Virginia Band and Orchestra Directors Association sponsors assessments for all of the music programs in Virginia public schools. A panel of professional adjudicators is assembled to critique the ensembles and judge them against state standards for excellence in performance, sight-reading, musicianship, and orchestral skills. Cooper Middle School is a member of District XII, which includes schools from the northern region of Fairfax County and some schools from Arlington County. District XII Orchestra Assessment is among the largest and most competitive music festivals in the U.S. It has grown so large that the event has been split into two divisions: the High School and the Middle School Division. On March 9-10, the middle school entries were hosted by Washington-Lee High School in Arlington. This year, the Cooper Middle School Symphonic Orchestra competed and represented with Grade IV music, with Grade VI being the highest and most difficult level.