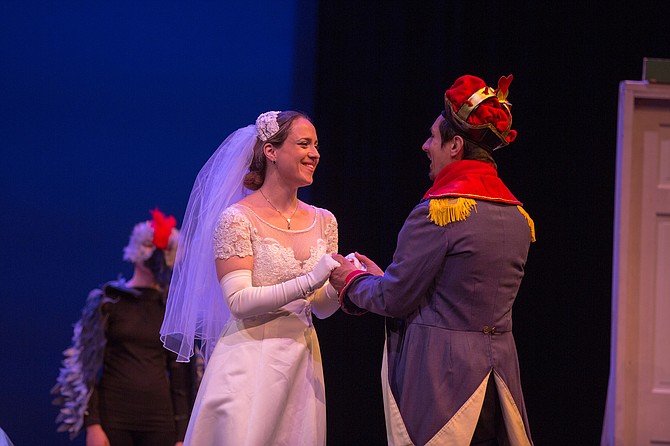 Cinderella and her prince. Photo by Paul Schomburg

The fake prince bowls everyone over.

Its production of Rossini’s “La Cenerentola,” or “Cinderella,” was less than an hour long and full of action, drama and comedy. Teachers had a study guide to explain it to their students in advance.

“I liked it when the bad guys fell off the chair,” said one third grader from Our Savior Lutheran School in Arlington. “I liked it when the silly men danced,” said another. “I liked the drama,” said a more sophisticated fifth grader. One told Elise Jenkins, “Hey weren’t you Treemonisha in last year’s opera?”

One child shouted into the orchestra pit, “You guys did a good job.” But a couple of them thought there should have been a glass slipper instead of a bracelet. One actor told them, “This opera is almost 100 years before Disney.”

“La Cenerentola” resembles the more popular version, but in this story the prince visits Cinderella’s home in disguise beforehand, falling in love with the embattled girl dressed in rags. A fake prince enters, charming the stepsisters. There is a ball at which Cinderella and the real prince again meet, but there is no carriage that turns into a pumpkin at midnight.

The four days of opera March 20 to 23 at Thomas Jefferson Middle School were shortened to three by the snowstorm, but adults and more children will get to see “La Cenerentola” again on June 30 at 2 p.m. at Gunston Middle School. There will be several performances that weekend for seniors, summer campers, homeschoolers and children of inmates.

Opera NOVA, with Jose Sacin as artistic director, has presented operas such as the “Barber of Seville,” “The Magic Flute,” and “Monkey See, Monkey Do” for many years, and will present “Charlotte’s Web” by Charles Strouse in spring 2019.