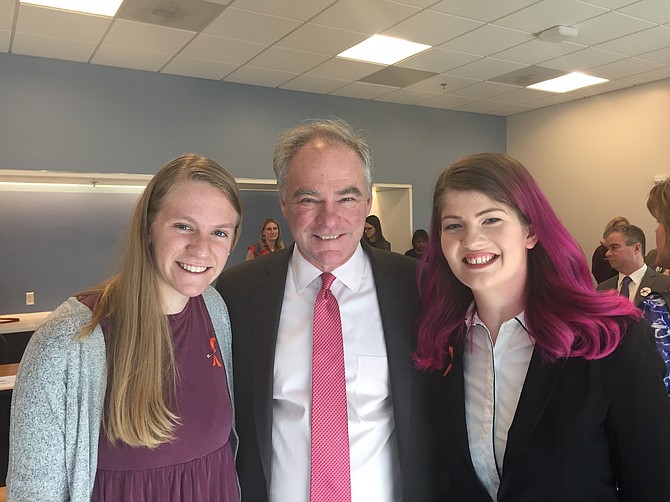 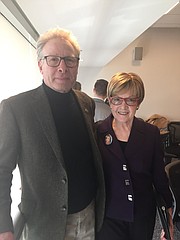 Andy and Barbara Parker, whose daughter Alison Parker was murdered on-camera in Roanoke in 2015.

One month after a school shooting in Parkland, Florida, coming just after the highest-casualty mass shooting in American history in Las Vegas, the debate over gun control is once again in the public spotlight.

“These kids are giving me hope in a way I haven’t had in a while,” said Kaine. “I’ve found, in young activism, a reason to not be despairing.”

Kaine pointed to a few items in the recent congressional budget that show signs of progress on gun control. Additional funding for school security was included in the budget, initially proposed to be cut in the President’s budget proposal but found bipartisan support in Congress. Kaine said that probably would have happened anyway, but other changes like allowing the CDC to research gun violence and part of a background check fix, only came about as a result of activism from students. Kaine said if the floor is opened to allow discussion of gun control measures, the gun control advocates will need to meet to put together three pieces of legislation that can make effective progress and still be seen as palatable. Kaine said he believes that while outright banning assault weapons would be difficult, senators like Marco Rubio from Florida have begun to show a willingness to look at limiting magazine sizes.

Kaine said the wave of activism reminded him of the Children’s Crusade in Birmingham, where students came out in waves to support Dr. Martin Luther King’s march, arguing against his protests that the future of the country was of just as important to them, if not more.

Others around the table didn’t share Kaine’s optimism. Martina Leinz, from the Northern Virginia chapter of the Brady Campaign, said she doubted Republicans would touch gun control legislation any time before midterms. Andy and Barbara Parker, whose daughter Alison Parker was murdered on-camera in Roanoke in 2015, said they believed the only ways to get Congress to make any progress on gun-control issues was to vote out members who were receiving support from the National Rifle Association (NRA).

State Sen. Adam Ebbin, representing the 30th District, confirmed that at the Virginia level, gun safety legislation had been effectively stalled. Of the 69 gun control bills submitted in the 2018 session, all had failed.

“There’s an idea of ‘what’s next’ if we ban things like bump stocks,” said Ebbin. “We need to reassure gun owners that we don’t want to take away their guns.

While the panel hosted a wide range of gun control advocates, there were a few notably missing parties. While one of the major topics of the day was working together with moderate gun owners to find a compromising solution, there were no pro-gun or anti-gun reform panelists present.

Philip Thompson, representing the Loudoun chapter of the NAACP, said the gun control gathering was good to see but lamented that he was the only African-American present for an issue that had disproportionately affected black communities in America.

“We have to work with those who suffered through this for years,” said Thompson. “I lost a sister-in-law and had a brother-in-law that was shot. There’s a joke in our community, that if we all open carried around D.C. we’d have gun reform.”

Among the policy discussion of how to change gun laws, survivors of gun violence also reminded the panelists of the human toll. Peter Read’s daughter was killed at Virginia Tech and said that it’s been important in the years after the massacre to see other members of her peer group moving on and continuing with their lives. Read also agreed with Thompson, saying that the kind of violence his family experienced is one that black communities in America are forced to live with on a constant basis, and that any gun control legislation had to work with that in mind.

“People are with us,” said Read, “they’re willing to act. Money isn’t everything. It’s votes. Young people have fear, but also hope.”

Two high school students from West Springfield were in attendance and were planning on marching the next day.

“We’re screaming as loud as we can,” said Ella Wogaman. “Find the kids in your district. We are organizing. We are trying. Listen to the kids, we’re doing what we can.”