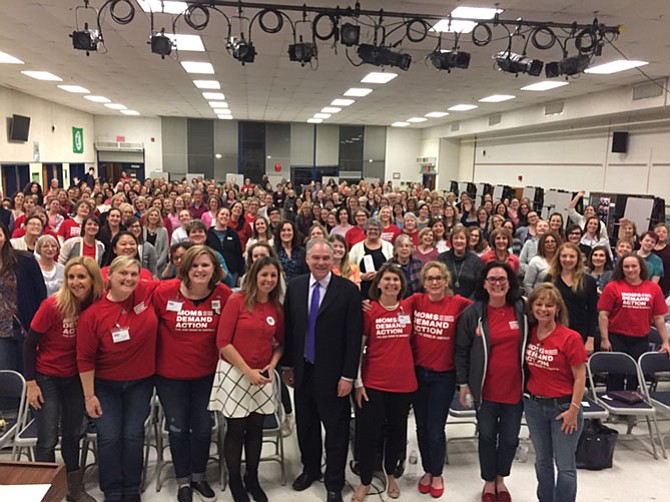 Kay Sedlak, a student from Fairfax, asks a question at the Moms Demand Action meeting.

Erica Wogaman of Springfield leaves a message on a banner to the students at Marjory Stoneman Douglas High School in Parkland, Fla.

“This is a growing and powerful movement. But it’s been a movement waiting for a moment. You don’t know when the moment’s going to come. It should have come a long time before now,” said Sen. Kaine. “We have to look for the moment now and see what we can do to make our schools safer, our communities safer, make our children safer, and our neighbors safer.”

Kaine said what’s happening in the U.S. as a result of the Parkland shooting is that the tectonic plates are shifting. “It’s like tectonic plates in California where the tension is building up because of a mismatch, between what the American public wants to happen and what Congress is willing to do,” he said. “It’s been building for such a long time. The tectonic tension eventually becomes so significant that the plates realign. We may be at that moment because of you, because of these youngsters [in Parkland, Fla.], and because of a deep sense of heart-sickness.”

ORGANIZER Sarah Ramia of the Burke/Fairfax local group of Moms Demand Action, which started in 2016, said: “We want to harness the raw emotion and the disgust that the community has had with gun violence in the United States. We wanted to bring everybody here; we wanted to educate them, and we wanted to give our Senator an opportunity to speak as to his views and what Congress can do, what the Senate can do, and what we need to do as voters to act and to affect change.”

The national group Moms Demand Action was founded by Shannon Watts in 2012 in response to the Sandy Hook shooting. It has since been a force for gun violence prevention, with chapters in 50 states.

“We are not anti-gun. We support for the Second Amendment but advocate for common-sense gun legislation and want to reduce 33,000 deaths a year by guns,” said Kim Perks of the Burke/Fairfax local group.

Perks gave some stats that 96 people a day die from guns; twice as many are injured; and that seven children die every day from guns. She added there are 13,000 homicides a year, with 50 women in a month killed by domestic partner, and that black men are 13 times more likely to be killed by guns than whites.

Perks said the group is working to close deadly loopholes in our background checks system that allow dangerous people, such as felons, domestic abusers, and terrorists easy access to guns. They are also promoting gun safety, so our children and communities will no longer be at an unacceptable level of risk; and supporting reasonable limits on when, where, and how loaded guns are carried and discharged in public places. They also support creating enforceable laws that address gun trafficking and fraudulent purchases to keep illegal guns off our streets.

THE MEETING outlined what moms can do on the local level – like writing letters to the editor or contacting their congressmen – to enact change in their communities.

Member Jennifer Lowe-Davis said 150 moms attend an annual lobby day in January and February in Richmond. “We show up and meet with our legislators. If we don’t speak to them, they don’t know that we’re here. They don’t know that we care about this issue. They can care about an issue all they want, but if they don’t have words from their constituents to tell them that it is important to us, then they’re not going to act on that. So, we go down every year, and we tell them we need gun sense,” she said.

Jennifer Herrera, Virginia Chapter Leader of Moms Demand Action, added: “The interest our chapter has gotten over the past two weeks has been incredible. We’re seeing meetings not only in Virginia but all over the country. From Charlottesville to Richmond to Arlington to Reston – we’re having massive meetings because people have had enough. They’re sick of Congressional inaction, and they’re going to take it upon themselves to be the change that this country needs to end the epidemic of gun violence.”

Added Dawnee Giammittorio, survivor engagement lead for the Virginia Chapter: “I think we’re just overwhelmed with the interest and the excitement that people are showing for gun violence prevention since the latest shooting, and we want to get people on board and advocating for more sensible gun laws.”

For more info on Moms Demand Action, visit their Facebook page www.facebook.com/MomsDemandActionVA, or visit their website: https://momsdemandaction.org, or contact the local Burke/Fairfax group at burkemoms@yahoo.com. Call 571-354-6764.