Much unity, some dissension as community discusses the issue. 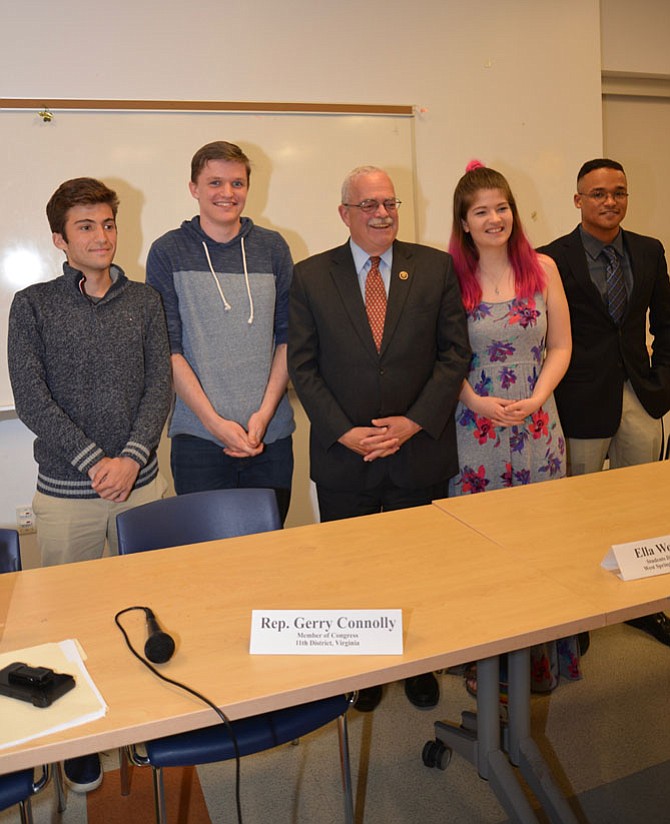 “We are more than an interest club. We will push for action.” — Michael McCabe, Robinson Secondary sophomore 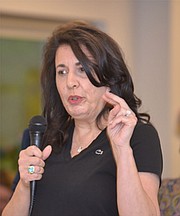 Donna Widawski, a former Secret Service agent from Fairfax, supports the efforts of the congressman and the students, but reminded them to “think bigger picture” about school and public safety. 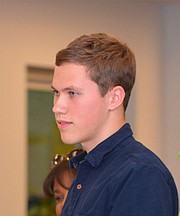 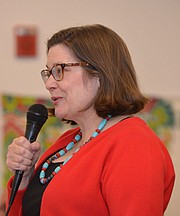 The Fairfax Council of PTAs, represented by president Beth Tudon, offered assistance and resources to promote voter registration in schools.

To begin with, the format wasn’t the traditional politician updating his constituents, responding to their questions and feedback, then making the rounds and shaking hands. Instead, the congressman shared the speaker’s table with four high school students who he credited with “bringing us together this evening for a community discussion on gun safety.”

Since the shooting at Marjory Stoneman Douglas High School in Parkland, Fla. on Feb. 14 that left 17 dead and more wounded, students across the nation have organized rallies, school walkouts and marches. They have been demanding gun regulations, other changes in law enforcement and communications, and more resources for mental health awareness and treatment. Groups have formed under banners such as “Enough is Enough,” “March for Our Lives,” and “Never Again.”

“We are more than an interest club. We will push for action,” said panelist Michael McCabe, a sophomore at Robinson Secondary School in Fairfax,

In recent weeks, McCabe and many other young activists started contacting their elected officials, asking to be heard. Connolly’s office received its fair share of those communications.

“This is really their Town Hall,” Connolly said in his opening remarks, adding that he sees real momentum coming from the student movement. “I think it is with their voices, their passion, that we will finally get something done.”

Three of the four panelists belong to the group Students Demand Action (SDA) at their respective schools, and the fourth is the president of Youth Initiative for National Action. They were there to pursue “common sense gun legislation.”

“A few months ago, we had a handful of members. I think we just hit 400,” Wogaman said. The West Springfield senior says that she and many others are focusing efforts on voter registration and getting people, especially first-time voters to the polls, as the way to “really find our voice and get our issues addressed.”

Langston Carter, a home-schooled senior from Woodbridge who has attended public schools, spoke from the viewpoint of students of color.

Carter cited studies that show people of color, particularly young African-American males, are significantly more likely to be the victims of gun violence. The mission of Carter’s organization is to “encourage the next generation to take action against bigotry and other issues … to work with political leaders to make a difference.”

Ryan Carney highlighted some of the actions that the members of his SDA chapter are taking.

“We’ve been getting together, organizing phone banks, writing letters, getting the word out wherever we can,” said the James Madison High School junior.

It’s also no secret where Connolly stands on the issue of gun safety — right alongside them. An active member of the Gun Violence Prevention Task Force, he says he’s proud of the “F” grade he earns each year from the National Rifle Association (NRA), whose headquarters are located in his congressional district. Aside from attending vigils on the NRA’s doorstep, recently for Parkland, and annually on the anniversary of the Sandy Hook Elementary School massacre, Connolly attributes his status with the organization to the numerous gun safety laws he has proposed or supported over the years. He also took aim at his “friends across the aisle” for their unwillingness to go against the NRA and “even discuss sensible safety measures to protect all of our citizens.”

“WE’RE NOT talking about taking everyone’s guns away,” Connolly said, “but I am sick of a ‘moment of silence’ in Congress after each of these horrific events and no action. More than 150,000 people have lost their lives to gun violence since Newtown and yet in all that time Congress has not taken a single vote to enact [basic gun control measures] … We couldn’t even get a vote to keep guns out of the hands of people who are on the “No Fly List.” [A list created by several federal government agencies of persons prohibited from boarding commercial aircraft for travel within, into, or out of U.S. airspace, primarily for suspected terrorist association.]

For Connolly and others, the basics are simple, “no-brainer” pieces of legislation to ban assault weapons, enact universal background checks and close the “gun show loophole.”

The current drafts are H.R. 5087 to ban assault weapons, H.R. 4240 to establish universal background checks, and H.R. 1612 to close the gun show loophole.

Of equal importance to advocates is fighting for funds for several initiatives. When one constituent complained that the Centers for Disease Control and Prevention (CDC) had been barred from studying the effects of gun violence, Connolly responded that the latest government funding bill did clarify that the CDC was, in fact, empowered to do such research, but that the funds to do so were not approved.

WHEN AUDIENCE members got their turn at the microphone, most offered encouragement and congratulations to the student activists.

Although it seemed that the panel and the audience were closely aligned in their views, there were those in the audience with a differing opinion.

One local resident, describing herself as a supporter of the Second Amendment, challenged Connolly on his views regarding the “hardening” of schools.

“I’m not completely sure what you mean by that,” answered Connolly, but he firmly rejected the proposal to arm teachers as a defense against gun violence in the classroom. “Can you imagine that scenario?” Connolly believes that it would be “madness” to put teachers in that position, even with training. “Was that a gunshot? Should I shoot? Who should I shoot? Teachers have a difficult enough role, a major responsibility just to do the job they have.”

Langston Carter and Michael McCabe backed Connolly’s position, noting that the “hardening of schools” approach to protection can often have a negative impact on students of color.

THINGS TURNED A LITTLE HEATED when the woman got back in line for a second turn at the microphone to “explain just what assault weapons are.” Rumblings from the audience during her comments caused the speaker to angrily assert that “there’s all this talk of a conversation, but you don’t want to hear an opposite view.”

Zachary Schonfeld, a senior at Reston’s South Lakes High School, recounted the often hateful and vulgar negative backlash he faced, particularly on social media, after speaking at an event. “How do you handle that?” he asked the panel. Connolly’s response — “One word. Fortitude. Keep going. Our opponents are counting on you to quit, to give up. Know that you are making a difference.”

Other audience members offered suggestions for improving school safety. Some, like former Secret Service agent Donna Widawski, urged the congressman and the students to keep an eye on the bigger picture. “Sensible gun legislation is critical, but there is more to the story, more to be examined and addressed to prevent all types of violence in schools and in the community at large.”

Fairfax County Council of PTAs president Beth Tudon applauded the students’ efforts to promote voter registration, offering assistance from her organization and partners like the League of Women Voters.

According to the FCCPTA, fewer than 20 percent of the county’s students were registered to vote during the 2016-2017 school year. This year, the numbers registered have almost tripled, but “It’s time to make a push,” she said. The deadline to register for the June 2018 primaries is May 21.