Privilege and Responsibility in Arlington
Votes

Privilege and Responsibility in Arlington 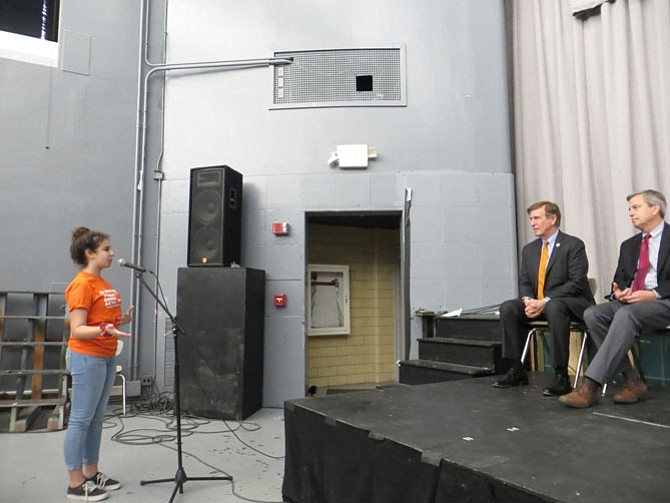 Ari Shenkman asks legislators how to reach across the party aisle on gun control issues. Photo by Vernon Miles. 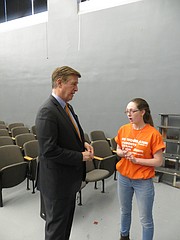 For students at H-B Woodlawn, the shooting at Marjory Stoneman Douglas High School in Parkland, Fla., changed the way they saw the school around them. The sense of security and safety was shattered, rekindling memories of watching the news about Sandy Hook Elementary when many were in elementary or middle schools. It’s a generation that has grown up with school shootings as reality, and led by 11th grader Karina de Leede and her peers, it’s a generation of students committed to changing that.

The town hall, held April 19, was as much about expressing the feelings of local students and citizens to lawmakers as it was learning from lawmakers

“After Parkland, there was a lot of anger among students, but no solid [way] to channel that,” said de Leede. “The marches were good for attention, but we need more.”

De Leede said one of the lessons she and other students have learned from years of gun control debates is there’s no way to talk to others if you completely shut down their views.

While all of the panelists were white, de Leede noted a growing realization among young gun control advocates that policy change won’t be effective or inclusive without involving African American populations that have been victimized by everyday gun violence for decades. De Leede said a panelist from Washington D.C. was invited to talk about the issue, but was unable to attend.

“The more people of different backgrounds we include, the stronger the movement becomes,” said de Leede.

The panel started with Asieh Kehyari, representing the McLean chapter of Moms Demand Action. Kehyari encouraged students to focus on facts when discussing gun control and laid out some of the more “common ground” goals for gun control advocates to pursue. Kehyari pointed to universal background checks as one of the most popular reforms on both sides of the issue.

“I was in hiding at the beginning, but I know my mother would be proud for speaking out,” said Carmen Lodato. “Maybe we can be the ‘never again’ generation.”

Several legislators also attended the panel and shared their frustrations at the lack of progress on gun control reforms at a national and state level. State Sen. Barbara Favola linked the stalling of gun control reforms to gerrymandering, which Favola said encourages representatives towards policy extremes to prevent being primaried by a more radical candidate. Noting that there were no representatives from pro-gun groups or politicians, Del. Rip Sullivan said Arlington students should reach out to communities in other parts of the state to initiate conversations about gun control.

U.S. Rep. Don Beyer (D-8) said that Republican control at the national level made states the more likely candidates to see gun control reforms in the near future. Noting that the youth were at the forefront of the latest push for gun control, Beyer said he would also be interested in seeing the voting age lowered to 16 and for voting registration to be more closely tied with obtaining a driver’s license.

The day after the town hall, students at H-B Woodlawn joined with other schools across the country in walking out in protest.

“I thought today was amazing,” said Chloe Fugle. “We’ve been working on this for a month. It’s about teaching, education our student body before the walk so students know what we’re marching for.”

Fugle said she remembered being particularly impacted by the shooting at Sandy Hook, being in sixth grade at the time and the reality of schools as targets sinking in. It was an experience other students said they related to.

“I was in sixth grade during Sandy Hook as well,” said Casey Ruggiero. “Then it kept happening. I remember during the Pulse Nightclub shooting following the updates on Twitter.”

Ruggiero said she took Sullivan’s comments about reaching out to other communities to heart.

“I think our area is a very liberal area, and very privileged,” said Ruggiero. “That comes with responsibilities.”

Other students said they were inspired by the fact that the town hall meeting had been entirely student organized and led.

“I know so many people touched by this issue,” said Kate Meredith. “I know the people that put this together. I’m so proud of them for taking charge and not waiting for something to happen.”