Evenings of Laughter and Standing Ovations in Fairfax
Votes

Evenings of Laughter and Standing Ovations in Fairfax 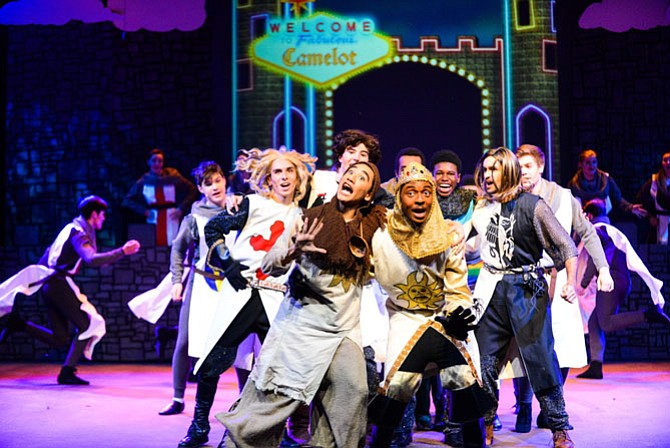 “Spamalot,” the multiple Tony award-winning musical by Eric Idle based on the 1975 motion picture “Monty Python and the Holy Grail,” is an irreverent parody of the Arthurian legend with a few twists and hilarious ones at that.

When high school director Megan Thrift chose the school edition of “Spamalot” for Robinson students, she did so with the intention of giving everyone an opportunity.

“The show is so full,” she said. “It's full of moments and opportunities for everyone to shine. We have 70 kids in this cast and they are fully immersed on stage and off. This show also provided a lot of unique challenges for the 40 student designers and technicians to work through collaboratively. And their work truly shines, and in some cases, steals the show.”

Having auditioned 89 high schoolers and 32 elementary and middle schoolers, the final cast and crew’s two months of rehearsals paid off.

ON OPENING NIGHT, Friday, April 27, a packed theatre gave way to an engaged audience in non-stop laughter and standing ovations for performances that wowed.

High school actor Daniel Williams’ standout performance as King Arthur coupled with Claire Burton’s soulful and agile vocal range as Lady of the Lake Godiva were the icing on the cake.

But everyone’s perfected performance impressed the audience equally as much from the pit orchestra to the makeup and costume designers to the tap dancers to the Frenchies with their precise accents to the Wee Knights Who Say Ni, including its youngest cast member, middle school drama department chair Amy Hard’s three year old daughter.

“I loved the show,” said audience member Shelly Persil. “I had a smile on my face the entire time and I was very impressed with the talent. The voices were amazing and I especially loved Steven Eckloff as Prince Herbert. Beautiful vocals and a rich character filled with emotion.”

Collaboration among students is vital, said Thrift. “I'm in constant awe of these students who choose to work collaboratively and give of themselves, realizing that the show is about the ensemble and supporting each other.”

“That consistent process through rehearsals and tech is what creates such an incredible product that the kids can be proud of because they know they added to it every step of the way,” said Thrift.

Hard, who only recently began collaborating with the high school theatre said it was a fulfilling experience to see her former middle school students perform.

“Ms. Thrift's leadership and inspiring spirit is the key to these huge productions. She trusts her students, and sets the bar higher than many a professional theatre. The sky is the limit, and her students jump, strive, and reach for what many would view as impossible ‘for high school.’ She has built a theatre program that is beyond most people's expectations, except for hers,” said Hard, who choreographed for the production along with students Izzy Guzzano and Maria Gleason.

“Incorporating local elementary school students is another way she has reached out to the community to include all,” Hard added.

Anna Maria Shockey who played Lady of the Lake Guinevere said the Monty Python quest is a classic nobody forgets.

“There is something so magical about the audience already loving the story so that the actors onstage are actually living and enjoying the adventure right along with them. It makes our job easy and fun!” she said.

“People should definitely come see the show because the level of performance is so much higher than what you'd expect from your average high school presentation,” said Alexa Mitchell, who is a freshman and played the viola in the pit orchestra. “I couldn't stop laughing the first time I saw it, and everyone should have that experience.”

“SPAMALOT” runs from May 3 to May 5, 7 p.m. to 10 p.m. at Robinson High School. For tickets, visit https://rambunctious-theatre-company.ticketleap.com/spamalot/